In “The Quarry,” a preacher by the name of David Martin (Shea Whigam) arrives in the small and economically devastated West Texas town of Bevel to become the latest person to head up its sole and sparsely attended church. His arrival is not auspicious—the night he arrives, his van is broken into and everything he has is stolen—and when he finds out that, with one exception, no one in his Spanish-speaking congregation understands English, it seems as if he will not be long in his position. However, his plain and unadorned manner winds up striking a chord with the parishioners—“He speaks without judgement,” according to one—and their numbers slowly begin to grow. Even Celia (Catalina Sandino Mareno), the woman who has been renting a room out in her house to a recent parade of temporary ministers, is impressed, even if he seems like no other preacher she's known.

Boy, is she right. What she and the other townspeople do not know is that the man they know as David Martin is actually a nameless drifter who was picked up on the side of the road by the real David Martin (Bruno Bichir) while driving down to take up that minister position. Although the real David has his share of personal demons—alcoholism among them—he is trying to find some kind of inner peace. In the man that he has picked up, he intuits a similarly tortured soul that he genuinely wants to help. Alas, the man does not respond to his ministrations very well and winds up killing the guy during a pit stop at a remote quarry. After haphazardly burying the body, the man decides to assume David’s identity and head to Bevel himself. When his van is broken into, that attracts the attentions of police chief Moore (Michael Shannon), who thinks that there is something slightly odd about this newcomer. However, Moore quickly discovers that the thieves were drug dealer Valentin (Bobby Soto) and his young brother Poco (Alvaro Martinez). When the real David’s body is discovered, he has enough circumstantial evidence to pin that crime on them as well, though the brothers have a pretty good idea of whom the actual killer might be.

Based on a 1995 novel by Damon Galgut, which was set in South Africa and dealt in part with racial tensions in the wake of the ending of apartheid, “The Quarry” sounds as if it has all the elements to be a dark and brooding western-tinged noir drama in the mold of “No Country for Old Men.” The trouble is that while director/co-writer Scott Teems has the ingredients, he doesn’t seem to have much of any idea of how to put them together in a compelling manner. He employs a deliberately slow and measured approach that works for a little while, but soon becomes plodding before fizzling out entirely at precisely the moment when things should start heating up from a dramatic standpoint. As for the screenplay, it too often feels like a collection of contrivances than anything else—we never buy the idea that the drifter would voluntarily elect to assume the life of the man he killed, and the developments that inadvertently tie the two brothers to the murder are pretty dubious. On top of that, the notion that the drifter can somehow win hearts as a preacher despite having no familiarity with the Bible (and a congregation that doesn’t understand what he is saying to them) sounds promising from a satirical standpoint, but winds up coming across as inertly as everything else. Whigham and Moreno are both good actors but they cannot do much with what they have been given to work with—he is stymied by a character that is frustratingly opaque without ever being compelling, while she has little to do other than lie around and contemplate her own regrets in life while smoking cigarettes.

What ultimately makes “The Quarry” so frustrating is that there are some good things in it that could have been developed into a more compelling film. The basic premise of the story is not without interest and could have served as the basis of an intriguing and gripping noir narrative. Likewise, the finale of the film is fairly strong, if somewhat implausible from a logistical standpoint, even though it will strike many as being too little and way too late to have any real impact. Best of all, it has the latest striking performance from Michael Shannon as the police chief. Granted, Shannon is one of those live-wire performers who can’t help but goose up any film he is in the minute he steps into a scene, and that is certainly the case here. In a story where every other element has been rendered as dry, flat and affectless as the area in which it has been set, he manages to create a character who feels like an authentic person with a life outside of the parameters of the plot. “The Quarry” may be a slow burn from a dramatic standpoint but it is only when Shannon is around that it flickers, however briefly, to life. 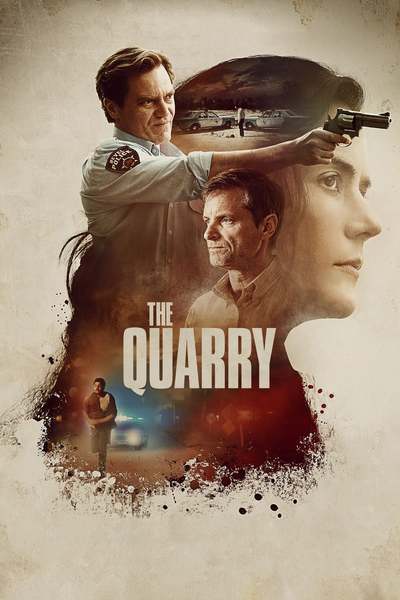 Shea Whigham as The Man