From the tumultuous exodus of Louis XVI during the French Revolution to the frenzied exit of Muammur Gaddafi, the flight of deposed despots from their furious former subjects offers a dramatist’s feast of real-world terrors and fascinations. Veteran Iranian director Mohsen Makhmalbaf takes such a situation as the premise for his 2014 feature “The President,” which displays his filmmaking skills in abundance but lacks the kind of cultural and political specificity that would assure its resonance.

Reflecting millennia of artistic tradition, as well as aiming to avoid modern censors, Iranian filmmakers have often employed allegory, symbolism and allusion in making provocative cinematic statements. But stories using such techniques usually refer indirectly to certain readily identifiable cultural, political or human situations, most often within Iran. “The President,” on the other hand, takes place in an anonymous country (it was shot in the former Soviet republic of Georgia) and offers no sense of treating a recognizable set of historical circumstances. Although Makhmalbaf, who’s been living in de facto exile from Iran since 2005, has said it was inspired by the Arab Spring, the film is devoid of references to religion and Arab (or Iranian) political realities. It’s more a generic, transnational allegory, if such a thing is not a contradiction in terms.

Light is a key element in the film’s opening. A car speeds through nighttime streets bedecked with tens of thousands of bright lights, which recall the mirrored interiors of many Iranian mosques. But this is not Iran, and we’re soon looking down on the city in the company of this nameless country’s uniformed, bearded President (Misha Gomiashvili) and his similarly dressed little grandson (Dachi Orvelashvili). To demonstrate his omnipotence, the old man picks up a telephone and orders that the city’s lights be shut off. Within seconds, darkness descends. Then he offers for the boy to command the lights’ reappearance. But this time an order doesn’t bring immediate compliance.

The revolution has begun, but the President initially seems to have only the vaguest sense of the danger that implies. Come morning, he gathers his family and hurries to the airport. His wife and two bickering daughters board a waiting plane, but when the little boy refuses, the President takes him and speeds away in his limousine.

Re-entering the city, he passes big posters of himself, but soon the images are in flames and rioters clog the street. When they stop at a roadblock, his one bodyguard is shot in the chest and dies in his arms. Suddenly the immediacy of the danger is all too real. The President orders the car to head into the countryside, and he and the boy abandon the vehicle as the radio announces a soon-to-escalate bounty on his head.

Once the President and grandson don tattered disguises—and he picks up a guitar, which allows him to claim they are street musicians—they begin an odyssey across the country, hoping to be rescued by a boat once they reach the water. The journey takes them through a catalogue of the horrors and chaos that follow a revolution. Hordes of starving people flee from rampaging soldiers who do their worst to the helpless refugees.

Some of these episodes are quite arresting in a nightmarish way. In one, a happy wedding party is stopped by soldiers, one of whom takes the bride into a shed and rapes her. Emerging, she raves at her male fellow captives for not helping her, and begs the soldiers to shoot her. In another scene, a group of former prisoners reaches the home of one, who says the memory is his wife was all that kept him going. Makhmalbaf never takes his camera off the man’s face as he knocks, hears the cry of a baby too young to be his, and listens as his wife tells him she married another man during his long absence.

In the latter scene, as well as another showing the President’s encounter with an embittered prostitute, we hear about the brutality of his rule, the executions, injustice and torture he was responsible for. But since these concern fictional constructs rather than a man and a country with recognizable histories, they have little dramatic weight. Likewise, though the film’s conclusion is viscerally harrowing (and very well staged, like most of the movie), its attempt to say something about how cycles of violence need to be ended in order for democracy to succeed tyranny seems vague and pat.

Perhaps the most interesting angle on this tale concerns Makhmalbaf’s own history. He was a teenage Islamist terrorist when he participated in an attack on one of the former Shah’s police stations, wounded a young policemen, was captured and then spent four years in prison under torture, until being released by the Iranian Revolution of 1979. After he started making films, he gradually evolved from a fundamentalist into a very committed humanist. In a way, “The President” suggests that it may contain his feelings about his nation’s last monarch. If he’d had the chance in 1979, would he have killed the fleeing Shah? Would he now, if he could project himself back in time, or would he advocate mercy for the man he and many regarded as his nation’s greatest enemy?

For such questions to have real force, they would have to concern the real people, not symbolic substitutes. That distance between the real and the symbolic is one that seems to bedevil Iranian artists who emigrate to other countries. Iranian cinema seems so rooted in the nation’s political and cultural soil that directors who choose to stay there despite onerous political difficulties (Jafar Panahi is the most famous case) are somehow able to maintain a sometimes astonishing artistic vitality. Others, like Makmalbaf, leave and though still doing very proficient work, seem to miss the nourishment of their roots, the specific textures and challenges that only Iran provides. 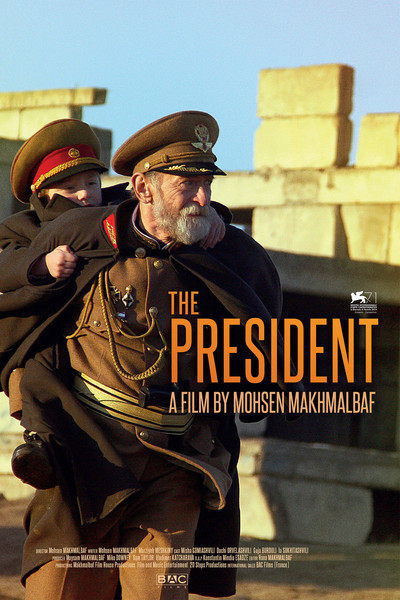 Misha Gomiashvili as The President