Benedict Cumberbatch is perhaps not the first actor that springs to mind when thinking of casting a Western, but under the direction of Jane Campion in her stellar drama “The Power of the Dog,” he’s just what the movie needs. Covered head-to-toe in dirt for most of the film, he embodies a character in a masculine crisis. He has a constant need to prove he's the roughest, toughest leader in a wolf pack of cowboys, possibly to hide his adoration and affection for the long-gone man who taught him more than just how to ride a horse. Phil (Cumberbatch) dominates the pecking order of any room he’s in through cruel remarks and an irreverence towards authority. His eyes are cold as mountain air; his face is a stone façade against the world; his tongue is as sharp as a snake fang. Gone are the quirky and endearing characters that Cumberbatch has played in the past. Here, coiled like a predator in wait, Cumberbatch is perhaps more fearsome than as his deep-voiced villains in “The Hobbit” and “Star Trek Into Darkness.” He moves through the movie like an unsheathed knife, cutting anyone unlucky enough to get close.

Cumberbatch’s Phil is the rough and tumble Remus to the movie’s kinder Romulus, his brother George (Jesse Plemons). Where Phil is calloused and mean, George is gentler and more soft-spoken, often at the mercy of his brother’s teasing. At a stop at a restaurant, Phil harshly taunts Rose (Kirsten Dunst), a widow running the joint, and her son Peter (Kodi Smit-McPhee), who Phil bullies until Peter walks off the job and leaves his mother in tears. George reaches out to comfort her, and ends up falling for her. This enrages Phil, who takes the loss of his brother to a woman quite badly. He steps up his intimidation of Rose and Peter, like intensifying heat with a magnifying glass. That is, until Peter tries to spend more time with Phil. The unlikely camaraderie unlocks a number of secrets and hidden intentions, changing everyone’s relationship to each other.

Using New Zealand for 1920s Montana, writer/director Campion sets this quiet-yet-angry Western against a harsh background that’s both beautiful and imposing. For Peter, it presents a hardened masculinity he must learn to overcome. For Phil, this windswept nature is an escape from the life of privilege he wants no part of. It is on the back of a horse that he found himself, and it is on those cow paths, mountain passes, and hidden rivers that he learned to disguise his desires.

Campion's adaptation of Thomas Savage’s novel of the same name strips out many details from the book and takes it back to its rawest in-the-moment elements. Backstory is filled in quickly and briefly in dialogue, if it’s ever filled in at all. There are no flashbacks, just a few scenes of characters sharing their past with each other. Campion and her cinematographer Ari Wegner write whole character studies in their close-ups. From this perspective, we get a sense of what the cast may never verbalize. It’s in the pained and panicked look on Rose’s face when she begins drinking after another round of Phil’s harassment. It’s in the steely glares Peter shoots Phil when he’s being picked on. It’s in George’s downward gazes at the floor, knowing he is helpless to stop his brother’s torments. It’s in the rage on Phil’s face as he realizes his tight-knit relationship with his brother is coming to an end with George’s marriage to Rose. It’s an approach Campion has used in her earlier works like “An Angel at My Table” and “The Piano,” the latter of which follows a main character, Ada (Holly Hunter), who cannot speak, but uses her face and sharply gestured sign language to get her point across. There is no doubt when Ada has something to share in “The Piano,” and through Phil’s movement, body language and reactions, Cumberbatch also speaks volumes with every scowl and every defiant smile.

Many of Campion’s movies also focus on shifting power dynamics between characters: who has power, who loses it, and how they gain it back. Sometimes, this is in the form of women fighting to be heard, like in “Sweetie” or “Bright Star.” But in “The Power of the Dog,” Rose’s entrance into the family is perceived as a threat, a challenge to established order. Phil extends her no kindness, slyly creating a toxic environment that poisons her, in order to retain power over his brother, their business and who is in charge around their stately mansion. She’s like an existential threat to him: she represents the sex he doesn’t desire and someone he doesn’t yet have under control. The truce between Phil and Peter unnerves Rose more, afraid of the influence he may have on her son. She loses herself in the bottle, just as Peter stands up to Phil’s bullying. It's a riveting dance between them all, waiting to see how it all will end once the music stops.

Speaking of the music, “The Power of the Dog” contains some of the best use of music in a movie this year. Jonny Greenwood’s work underlines and emphasizes many of the actions playing out on-screen. String compositions twist and turn as sharply as the movie’s plot, like a jagged undercurrent pulling our emotions in certain directions. The sounds of sweet violins sour, while softer notes swell into intense waves. The changes are quick, a nod to the tense dynamics between the brothers, the widow, and her son. Many of the songs use plucked strings to create an air of uneasy anticipation, as if cantering into danger. Rows of violins join in to heighten this uneasy feeling, almost awakening our fight or flight response. The music doesn't stray too far from the prototypical Western sound yet adds these extra layers of foreboding throughout.

“The Power of the Dog” revels in this suspenseful place much like Phil prefers working with cattle than dealing with high society. Though the movie starts at a gentle pace, it doesn’t stay there long. There is so much layered desire, hatred, and domination that soon comes rolling out to disturb everyone’s uneasy peace. The game of wits between Phil and everyone else is a chilling one to watch, and it’s exactly the kind of end-of-the-year movie to finish things with a bang.

In theaters today and on Netflix on December 1st. 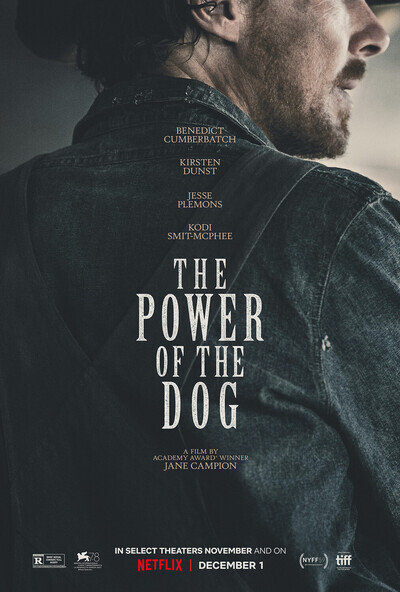