It’s interesting to consider how the TIFF Midnight Audience Award winner “The Platform” would have tracked a decade ago. It would have had a limited theatrical release, gaining a cult following in midnight screenings around the world before really catching fire on DVD as a word-of-mouth genre hit. All of those steps are gone in 2020, and it’s now on Netflix for millions of people to watch this weekend. Of course, access to good films—and this is a good film—is what matters, especially during a quarantine, but I wonder if it will get the same traction as it’s buried on an overcrowded service as it would have if people had passed it along the old-fashioned way. Seek it out. Tell your friends. It’s worth a look.

The concept of “The Platform” is undeniably clever. Almost the entire film takes place in a sort of futuristic or Camus-esque structure called “The Hole.” Hundreds of floors tall, it is a prison in which people are placed on floors two at a time. Every day, a platform descends through a large hole in the middle of the building, and it’s the only chance for food for the entire day. On level 1, the prisoners have access to a feast of lovingly prepared dishes. If everyone only ate a small ration, it could make it all the way to the bottom with something for each prisoner. It never does.

Our eyes into this nightmare belong to Goreng (Ivan Massagué), who volunteered to enter the prison to quit smoking and read a book (everyone is allowed one item), without fully understanding what he was in for. His first cellmate explains the process of The Hole to Goreng as the film opens on level 48. By that time, there are usually some leftovers on the platform. But the evilest part of this system, and arguably the film’s most clever societal insight, is that inmates change floors every month. So you could be relatively happy on 8 one day and then on 133 the next day. And if you’re wondering how these people survive when they’re on the lower floors, you might not be ready for the grisly place this movie goes.

The social parable is clear—if the haves didn’t take more than they needed, there would be enough for the have-nots. However, writers David Desola & Pedro Rivero and director Galder Gaztelu-Urrutia aren’t content to merely sit back on that idea, expanding on it and unpacking it with each new development. It’s a film with multiple impressive twists given its limited setting, and each of them casts a new light on how the movie is supposed to reflect society. I particularly found fascinating the way the changing floors impacted people who had been on lower levels before but were now lucky enough to be high. Rather than be sympathetic to those in a place they just were, they seem to take even more, making up for lost time and aware they might not get this close to the top ever again.

“The Platform” is also a grisly, gnarly horror film, one that becomes surprisingly bathed in blood during its action-heavy final act. The structure has led to comparisons to “Cube” and “Snowpiercer,” but it also reminded me of brutal action films like those in “The Raid” series. Ultimately, however, what makes “The Platform” work is that it stands on its own. It’s not just a remix of ideas from other films, a daring piece of genre filmmaking. And, of course, like everything, it has a different energy now. As we see how society functions (or fails to do so) in the face of one of history’s most devastating crises, take some time out and watch “The Platform,” a funhouse mirror reflection of our world. 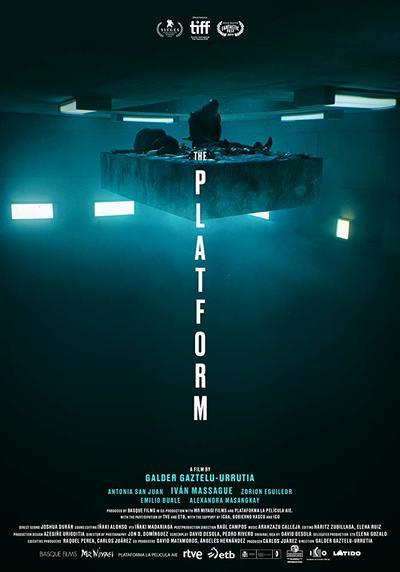