The purple-clad "Ghost Who Walks'' stars in a rousing jungle adventure, in one of the best-looking movies in a long time. Billy Zane stars as the Phantom, Treat Williams is the evil Xander Drax, Kristy Swanson is the plucky Diana, and the stunts and special effects are nonstop. The movie is wonderfully entertaining, red-blooded and rousing, and with a production design that makes it uncommonly handsome.

The movie is also smashingly entertaining on the story level. The Phantom, created in 1936 by Lee Falk, is said to be the first of the superheroes, and the movie is true to his origins. He doesn't have the absurd powers of Superman or the catlike grace of Batman, and when he lands on the hood of a speeding truck, the film doesn't do it with alight pounce, but with a heavy thud, as of muscle meeting metal.

Although he's known to those who fear him as “The Ghost Who Walks,” he isn't immortal; he's the 21st in a line of Phantoms, who trace their heritage back to the first Phantom's vow to fight evil and piracy. (How the Phantoms have found 20 brides willing to live in the Skull Cave is a question not answered in this film.) The film stars Billy Zane as the Phantom, a.k.a.mild-mannered Kit Walker. His fury is roused when an evil industrialist named Xander Drax (Treat Williams) schemes to bring together three priceless skulls that, when assembled, will give him power over mankind. Fighting against Drax's schemes is a heroic newspaper publisher (Bill Smitrovich), who dispatches his niece, Diana Palmer (Kristy Swanson), to the jungle in search of one of the skulls. Phantom fans of course know Diane eventually becomes Mrs. Phantom, bu there they are meeting again for the first time after her college courtship with Kit that ended when he mysteriously disappeared.

The movie's plot is essentially a series of adventure sequences.

There's an aerial dogfight between a Pan American Clipper and two red biplanes. Two perilous crossings by truck over a disintegrating suspension bridge. A strangling by skeleton. A chase in which the Phantom and Diane successfully drop from a plane and land on the back of Hero, the white stallion, just before the plane crashes into a mountain.

Anda showdown inside an eerie mountain cave, where members of the Singh Brotherhood and Drax battle for the skulls against the Phantom and the forces of good. At the end, as a bonus, there's a really neat miniature submarine.

The director, Simon Wincer, orchestrates these events just a hair this side of parody. He and Billy Zane find the right tone for the Phantom: bemused,all-knowing, wise, irreverent. “No smoking in the skull cave,” he says at one point. And when Diana tries to run the show: “Fine, go ahead--it's your rescue.”The movie's best line is said by a bad guy from the big city who now finds himself, in brown suit and fedora, inside a menacing jungle cavern: “Skulls!Powers of darkness! This isn't right! I was an altar boy, for the love of Pete,at St. Timothy's! The only power I believe in comes out of the barrel of a gun!”Zane plays the Phantom as essentially an ordinary, if talented, human who wears a purple suit and an eye-mask (of course Diana can’t recognize him when he'swearing the mask). He often functions as the calm center of the storm. Treat Williams, as Drax, is implacably evil (he blinds a librarian by hiding spring-loaded needles in a microscope) and also slick and oily in the best pulp tradition. Kristy Swanson (whose “Buffy the Vampire Slayer” is a cult favorite)is plucky and athletic as Diana, and develops an intriguing relationship with Sala (Catherine Zeta-Jones), Xander's dragon-lady sidekick, who softens and changes sides.

What all of these people decided, I suppose, was that the great strength of “The Phantom” was style--which made the classic comic strips stand out from the crowd, and which might help define the Phantom franchise for modern audiences(since, let's face it, the Phantom is not as big a name as Batman or Superman).The production design by Paul Peters is tirelessly inventive, but also crucial is the photography by David Burr, whose framing creates montages defined like a comic strip.

Burr sometimes uses color and composition in much the same spirit as the Glasgow artist Jack Vettriano, whose flashy gangster types and molls in red dresses regard each other in sullen lust.

“ThePhantom” was written by Jeffrey Boam, who wrote “Indiana Jones and the LastCrusade.” It has the breakneck energy of the Indiana Jones movies, and the samelove of fedora hats and very big old trucks.

But it's not Indy in a purple suit. It has its own distinctive tone and feel, and a certain innocence; the PG rating indicates it's suitable for families, and so it is, because it lacks unnecessary violence and sexuality--but that doesn't mean it's not red-blooded. It's in love with a period when there were islands not on any map, and one or two brave people could change history, and characters could shout out, “Have you heard the exciting news? We're going to the Devil's Vortex!” 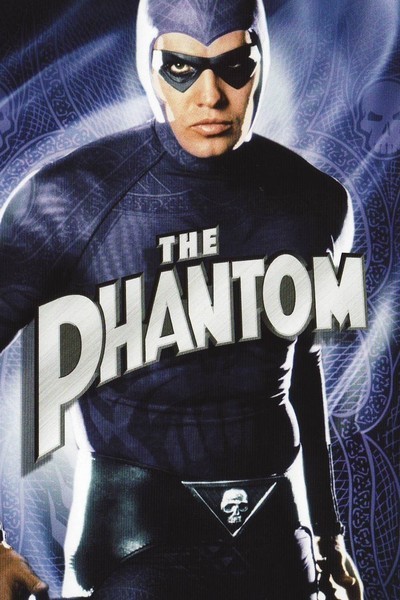 Rated PG For Action-Adventure Violence and Some Mild Language