The failure to evolve is so often caused by our collective refusal to view our own history through a clear-eyed perspective. Literary critic Henry Louis Gates Jr. has encouraged viewers to trace back their own origins in his invaluable “Finding Your Roots” series, and it was with that same probing curiosity that he tackled America’s most revered political figure in 2009. John Maggio and Muriel Soenens’ extraordinary two-part PBS documentary, “Looking for Lincoln,” finds Gates toppling the 16th president’s mythologized sainthood in order to build a more complex portrait of “the Great Emancipator.”

What he ultimately discovers is that Lincoln overcame his own racism, thus allowing him to transcend the prejudices of his time in order to do the right thing, only to be assassinated before he could fulfill the promise of his immortal words. The lesson to glean from his life is that we all possess the ability—and should tirelessly strive—to change for the better, rather than sit back and reassure ourselves with the lie that we now live in a post-racial society. The moment we deem ourselves infallible is the turning point that leads to our swift downfall.

Maggio’s latest documentary, “The Perfect Weapon,” which is premiering on HBO and HBO Max less than three weeks prior to the 2020 US presidential election, essentially illustrates that when it comes to the crumbling of democracy, we have no one to blame but ourselves. Based on New York Times national security correspondent David E. Sanger’s 2018 bestselling book, this profoundly disquieting exposé on the urgent threat of cyber warfare details how America fired the first shot that triggered the global mayhem. Since George W. Bush had already gotten America into a war with Iraq on the false pretense that the country had a nuclear weapon, he had no hope of convincing the world to get into a conflict with Iran over their nuclear program.

His solution was to discreetly task an Israeli-American cyber team with designing code that could infiltrate Iran’s nuclear control system in 2007, a plan that the former US Director of National Intelligence, James Clapper, testily declines to discuss with Maggio. The resulting Stuxnet virus was able to lie dormant for days in the machines of Iran’s Natanz nuclear plant before breaking them apart, while creating a surveillance loop to trick operators in the style of a heist movie. As the virus began accidentally—and inevitably— spreading elsewhere, it set a precedent for all cyberattacks that would follow, making it fair game for every nation to maliciously target one another without officially declaring war.

Just a few years after the 2009 founding of the US Cyber Command, cyberattacks became one of the top three threats facing America, without any plan being in place for how businesses should respond to being virtually dismantled by foreign countries with whom we are not engaged in physical combat. The film’s recurring theme of unchecked hubris is smugly embodied by wealthy casino magnate and conservative megadonor Sheldon Adelson, who suggests on camera that an atomic bomb should be dropped on Iran. Not long afterward, Iranian hackers destroyed the Sands Corp. network of Adelson’s Venetian casino in Las Vegas, while defacing its site with the unambiguous message, “Don’t let your tongue cut your throat!” Sanger himself earns one of the film’s only laughs by promising that “what happened in Vegas wouldn’t stay in Vegas.”

Sure enough, on the heels of his prophetically titled directorial debut, “This Is the End,” Seth Rogen thought it would be funny to kill off North Korean dictator Kim Jong-Un in his next film, “The Interview,” by having his head explode. As soon as the trailer was released, North Korea vowed a merciless countermeasure that took the form of the 2014 Sony hack, spilling out the studio’s dirty laundry which the media ate up like vultures instead of focusing on the implications of hostile foreign interference. Though Barack Obama argued that a dictator couldn’t impose censorship on the US, that is precisely what happened, confining “The Interview” to a limited theatrical run (Rogen hasn’t directed a feature since). Precisely what Obama’s appropriate response to the attack was remains unclear, yet it’s clear that shutting down the internet doesn’t mean much to a country where only ten percent of its population owns cell phones.

With our 24-hour news cycle having the attention span of a squirrel-obsessed puppy, it’s all too easy for countries like Russia to divert our attention whenever they please. Despite the Democratic National Committee finding their machines had been infiltrated by Russian Military Intelligence at the height of the 2016 primaries, the hackers were still allowed to steal documents for weeks until they were finally kicked out. Hillary Clinton’s campaign chairman John Podesta, still appearing shell-shocked, was hacked by what appeared to be a legitimate e-mail from Google requesting that he change his password, leading to the infamous leak of Clinton’s e-mails.

The prioritizing of superdelegates over the votes of regular party members that led Clinton to win the nomination over Bernie Sanders isn’t given enough attention by this film, in how it discredits the democratic process in a way that leaves trolls like Donald Trump to take full advantage of it. Sanger recalls getting a phone call from Trump, fresh from his first meeting with Vladimir Putin, where he excitedly informs the correspondent of how Putin convinced him that Russia couldn’t have been behind the hack because they wouldn’t have been as “sloppy.” This was the pivotal moment that affirmed for Sanger how Trump was actively seeking justification for him not pushing back against Russian interference. In the first year of his presidency, ransomware held hundreds of thousands of computers hostage for money around the world, with many victims finding it cheaper to pay back the ransom rather than rebuild their databases.

There’s no question that “The Perfect Weapon” plays directly into our paranoia as we place our faith in an election process that will be tested by a president who not only has refused to promise a peaceful transfer of power should he lose, but has openly attempted to cripple the US postal service in order to silence the mail-in ballots from responsible pandemic-era voters eager to vote him out. No horror film selected for our Halloween viewing pleasure can compete with the scariness of our modern world, as the search for a COVID-19 vaccine has, in Sanger’s words, “reordered the competition for world power.” China has already stolen security clearances by hacking into the US Office of Personnel Management, and is also trying to steal vaccine-related research.

Perhaps most distressing of all is the ease with which foreign hackers can manipulate us with misinformation precisely because of our growing disillusionment with America’s alleged democracy, as our grappling with systemic racism has been intensified by the disproportionate impact of COVID-19 on people of color. How can we fully believe that our votes matter when the Electoral College still exists? Maggio’s film ends by implying that foreign malware could easily infect voter registration databases, a threat that will keep viewers up at night, without much consolation that a solution will arise. Yet like all of the director’s work, it does an admirable job of forcing us to acknowledge our complicity in the ensuing crises, while inspiring us to do our part in striving for a better future. And that starts at the ballot box. 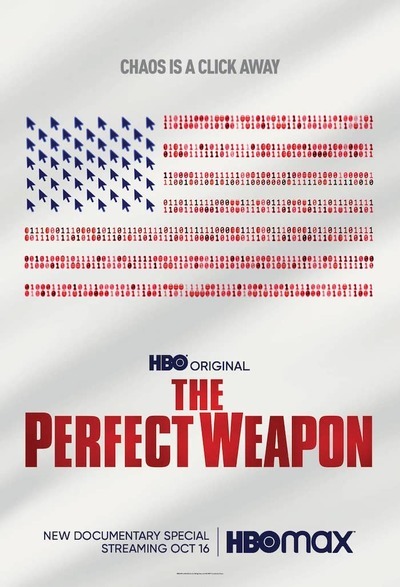