After months of controversy and now a limited release in arthouse theaters and through VOD, “The Interview” is nothing new, but it looks great. Its widescreen visuals are James Bond/"Mission: Impossible" chrome-plated sleekness. The camera glides, shakes and catches the occasional wispy anamorphic lens flare as characters flit through control rooms, conference rooms, hotel suites and grand chambers. You expect Kanye West and some X-Men to show up. It’s the visual approach filmmakers like Edgar Wright and various cohorts of this film’s star, Seth Rogen (including its co-director, Evan Goldberg), spent the past decade indulging, to give their flouncy bromantic comedies the sizzle and swagger of a good action-adventure. To make it worth the trouble (and expense), you need more than just a tight story and vivid characters. You need performers who play it without a wink. Rogen’s co-lead, James Franco, takes a break from winking roughly one third of the time.

Late in the film there’s a ludicrous, emotional scene between Franco’s character, an American news personality-jackass, and North Korean dictator Kim Jong-un (Randall Park), that reminds us what Franco can do when he gets serious and subtle. His palpable sorrow almost makes the weak East-West jokes pop. Early in the film, and for much of it, he is simply trying too hard. Imagine James Dean aiming for Will Ferrell speed and pitch. In Franco’s relentless hyperactivity I sense immense fear, of not supplying enough energy to this gargantuan film, of not giving Rogen enough to volley back. It’s as misguided as Leonardo DiCaprio’s yelping lizard in “The Wolf of Wall Street.”

Seth Rogen, on the other hand, hangs out. The credits list him as a co-director and producer, but he wears none of the presumable stress of those duties in his performance. His naturalness serves the chatterbox dialogue a lot better than Franco’s general muppet approach.

Franco’s manic newsman convinces his longtime producer (Rogen) to seek an interview with Kim Jong-un after learning that their talk show is the supreme leader’s favorite. Before they can seal the deal, the CIA recruits them to poison Kim during their North Korea visit. Trouble is, Kim ends up showing a human side very different from the West’s image of an infantile, eccentric tyrant. Could Kim be, deep down, just a cool geek, an American slacker at heart?

I didn’t laugh once, but there were several lines that, in context, got a wide fool-grin out of me. Here are a few:

“She’s not honeypotting you and I’m not honeydicking him.”

“A tiger has night vision goggles?”

A few other smirky lines related to the coming-out of a famous rapper* on Franco’s trashy TV show prepare us for an average of one homosexual panic and/or homoerotic joke per scene--standard ratio for the Rogen genre. (*The rapper’s deadpan actually saves the confession scene from Franco’s Jiminy Glick-wannabe preening.)

Opportunities at rich satire flatten out into “Hangover” dude-dope-doodoo jokes, where the premise is that there’s nothing funnier than watching over-privileged grown men act out middle school id worldwide, except for the spectacle of foreigners catching the Ugly American bug, too. “They hate us cuz they ain’t us” is Rogen’s dismissal of his show’s critics, and that philosophy extends to this film’s worldview. Those that don’t hate “us” are simply in awe, like the adorable North Korean official (Diana Bang) who can’t keep her hands off Rogen. She is liberated in his bed and, later, at his side, gunning down her countrymen. But, again, that’s nothing new. Everybody from Hope & Crosby to Eddie “Golden Child” Murphy to Ben “Tropic Thunder” Stiller have used the world’s exotic locales to riff on American insularity without challenging it. Cute, but the question is, when will this formula get as old to popular filmmakers as it is to those of us who sense the complacency it encourages in a world that churns blithe dehumanization into the stuff dictators and profiteers thrive on? 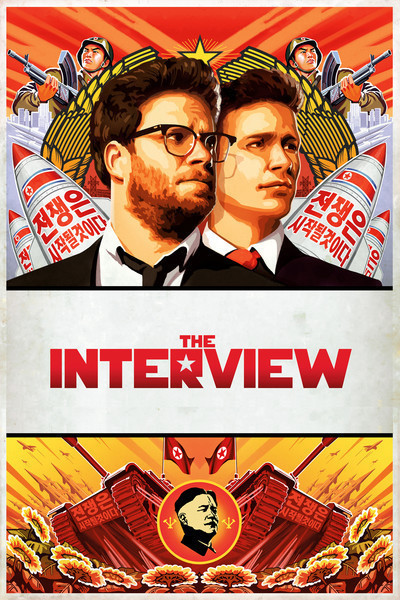