This is the End

Back in my Baptist church–going younger days, I sang about Heaven and heard sermon after sermon about Hell. "He-yell," as the good Reverend called it, was waiting for non-believers and unrepentant sinners. I must have been the latter, because my Mom constantly warned I was "going to Hell with my eyes wide open!" My 8-year old brain conjured up images of falling into a vivid, nightmarish pit of fire and brimstone, my eyes bigger than Marty Feldman's, only to discover that everybody I knew was down there too, including my beloved Mommy. "Well, look who's here!" I'd say with a smirk. Mom always responded by literally slapping the Hell out of me.

I thought of these childhood visions of eternal damnation while watching Seth Rogen and Evan Goldberg's apocalyptic horror-comedy "This Is The End." Making their directorial debut, the duo who brought you "Superbad" send celebrity after celebrity to the Devil's doorstep courtesy of huge, fiery sinkholes that open in the Hollywood hills. These folks deserve it too, for sins far greater than anything a little nappy-headed boy from Jersey could have done in his childhood. Michael Cera, for example, plays an out of control drug fiend who has three-ways in James Franco's bathroom. Rihanna sings dirty songs with Craig Robinson. Everyone else with a famous pedigree is as debauched as the subjects Kenneth Anger chronicled in "Hollywood Babylon." Since there's no room for the hopeless sinner, into the void most of these entertainers go. Lucky non-celebs receive heavenly beams of light that rapture them into Heaven.

Left behind to suffer on Earth is the Judd Apatow Justice League of Actors: Jonah Hill, Jay Baruchel, Danny McBride, Robinson, Franco and Rogen. All play exaggerated, comically depraved versions of themselves. They survive because their directors wanted to hang out with them under the guise of making a movie. But rather than turn "This is the End" into a vanity project where the actors have more fun than their viewing audience, Rogen and Goldberg invite us to partake in their funny-scary lunacy. As the world ends around them, the actors offer a sweet yet biting peek into their platonic relationships. Sending up their tabloid-based persona, "This is the End" offers each a chance to mock and be mocked. The result is far more entertaining (and far gorier) than the commercials led me to believe.

The pre-Apocalypse setup finds Baruchel visiting his best friend Rogen in Los Angeles. After an amusingly sped up montage of stoner humor, Rogen asks Baruchel to join him at their mutual colleague and friend James Franco's house. Baruchel doesn't want to go, because Jonah Hill will be there, but Rogen convinces him otherwise. Franco's oddly-shaped house, where most of the film takes place, is an imaginative piece of set design. With its phallic sculptures, arty paintings, concrete floors, hidden closets and multiple windows, the house becomes a character of its own, eagerly anticipating each horrible visitor who stops by for mischief. The first of said visitors is the one guy nobody invited, Danny McBride. McBride quickly establishes why he was left off the list by displaying the personality one would expect from the star of "Eastbound and Down."

While Rogen and company take every opportunity to inject humor into their trials and tribulations, "This Is The End" plays the Rapture itself rather straight. The first sequence of the Apocalypse is very well done, with Rogen and Baruchel running directly into chaos. These scenes have a jittery, queasy panic as the directors follow the action with steady camerawork and editing. People die horrible deaths (Michael Cera's wage of sin is a particularly gruesome paycheck) and while James Franco's house makes for a comically rendered safe haven, the filmmakers assure us it's only temporary. Food and water become scarce, and the attitudes inside the house become almost as hostile as the world outside its doors.

"This is the End" finds a balanced tone most horror comedies fail to deliver. Grossout humor melds easily with grossout horror, sometimes at the same moment. The obvious nods to "The Exorcist" and "Rosemary's Baby" co-exist with a hilarious examination of the familiar dynamics of a group of friends. There's a leader (Rogen), a troublemaker (McBride), people who pretend to like one another but don't (Hill and Baruchel), the cool, arty one (Franco) and the all-around nice guy (Robinson). "This Is the End" reminds us of our own circle of friends and the occasional drama that surrounds them. Regardless of the situation, those with a casual comfort around one another always fall back on group-defined roles, routines and conflicts. Not even the end of days will stop Rogen's friends from ribbing him about "The Green Hornet," nor will it prevent Jonah Hill from taking shots about his post-Oscar nomination film choices. And nothing ends a grudge like good old-fashioned demonic possession.

As they did with "Superbad," Rogen and Goldberg add a layer of emotional sweetness that sneaks up on you, diluting the raunchiness and giving the film a greater purpose than mere shock value. Even at the lowest moments of terror and hilarity, there's an undercurrent of hope and redemption for those who seek it. This is a refreshing change from the spate of recent comedies where meanness alone passes for character development and humor.

Still, be aware that this is a rather hard-R rated comedy. In addition to the fiery pits and the gore, the F/X team provides demons both CGI and human-based (one is clearly a guy in a suit), two very well endowed iterations of Old Scratch, a destroyed Hollywood that Roland Emmerich would envy and a final, blisteringly white final sequence I wouldn't dare spoil for you.

I was pleasantly surprised by the funny, suspenseful and ultimately jubilant "This is the End," though I imagine for some viewers it'll be the equivalent of an eyes-wide-open descent into He-yell. You know who you are. 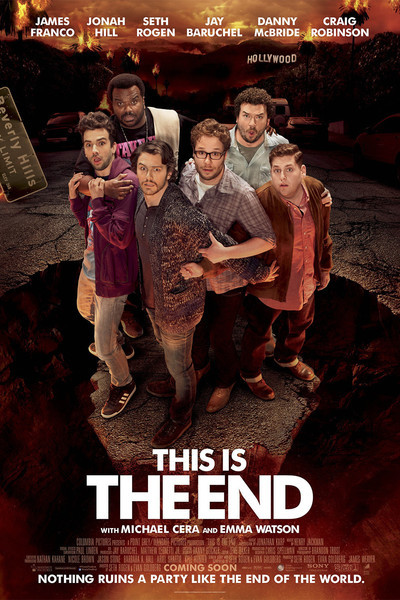