The People vs. Fritz Bauer

The title character of “The People vs. Fritz Bauer” was a fascinating man whose career as a prosecutor, trying to expose the crimes of the Nazis, certainly deserves the dramatic treatment director Lars Kraume gives it here. A Jew born in Germany, Fritz Bauer had begun a legal career that was interrupted when he was sent to a concentration camp in the 1930s. After managing to extricate himself, he spent the war years in Denmark and Sweden, then returned to Germany and the law in the late ‘40s.

Bauer reached the peak of his renown in the early ‘60s when he prosecuted commanders of Auschwitz in a public trial. Though it may seem shocking now, relatively little public examination of the Holocaust had occurred in Germany since the end of the war. Many former Nazis occupied high positions in German society and officialdom. Though Bauer was accused of pursuing vengeance as a Jew, he insisted his efforts were motivated not by the past but by the future: he wanted to educate German young people so that the horrors their ancestors committed were never repeated.

“The People vs. Fritz Bauer” concerns not this trial but a more hidden episode in Bauer’s career that occurred five years earlier. The tale opens in Frankfurt in 1957, when Bauer (Burghart Klaußner in a vivid, forceful performance) is discovered passed out in his bath from an overdose of alcohol and sleeping pills. His enemies in the establishment, who resent and fear his dogged pursuit of former Nazis, seize on this as a possible reason to force him into retirement. Rumors have it he intended suicide. “I have a pistol,” he replies. “If I want to kill myself, there won’t be any rumors.”

The prosecutor’s survival means he can pursue a uniquely compelling case: the capture of Adolf Eichmann, a key implementer of the Holocaust. The chase begins when Bauer receives a letter from a German in Argentina who says he know where Eichmann is because his daughter has begun dating the Nazi’s son. The information is persuasive, but it’s also a problem: if Bauer takes it to Interpol or the German intelligence service, it’s very likely Eichmann will be alerted and flee.

Instead, he goes to Israel and presents his evidence to the Mossad, Israel’s intelligence service. They appreciate his efforts but say they are preoccupied with Israel’s Arab enemies, and besides, they’ve had reports of Eichmann’s whereabouts from all over the world; to pursue this lead, they would have to have confirmation from a second source.

Bauer has his work cut out for him when he returns to Germany, and it’s surrounded by dangers. If he’s discovered colluding with the Israelis, he can be charged with treason. And there’s a more personal peril: In Denmark, police reports exist showing that he visited male prostitutes when he lived there. In Germany, the notorious Paragraph 175, by which the Nazis criminalized most homosexual behavior, is still in the books.

These two areas of concern converge when Bauer confides his hunt for Eichmann to a sympathetic young prosecutor, Karl Angermann (Ronald Zehrfeld, a charismatic actor who will be known to U.S. audiences from Christian Petzold’s “Barbara” and “Phoenix”), who in turn shares some of his own secrets with Bauer.

Angermann is an invented character, and the story elements that involve him are the only major areas where the film diverges from history. Unfortunately it shows: While there’s dramatic power in the relationship between the two prosecutors (thanks in part to the strong work of the two actors playing them), some of the revelations about the younger man feel contrived and overly melodramatic.

Kraume’s mounting of this tale, while capable enough, is also rather staid and conventional. (A sharper, more forceful rendition of somewhat similar Cold War material can be found in Steven Spielberg’s “Bridge of Spies,” in which Klausnerr also appeared.) But there’s no question that this story was worth telling. Throughout, Bauer intends to bring Eichmann to trial in Germany, as a way of exposing the whole Nazi hierarchy. But the government of Konrad Adenauer doesn’t want some of its members’ pasts revealed, while the U.S. is disinclined to upset an important ally. Eichmann, of course, was tried and executed by Israel. Bauer’s role in his capture was not revealed until many years later. 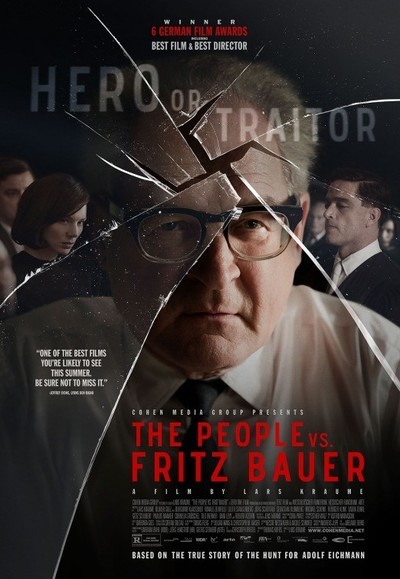