When the film “Butcher’s Crossing” began making its way along the festival circuit last year, it was promoted as being the first time that its star, Nicolas Cage, had ever done a Western. This revelation seemed so unlikely that I immediately went to IMDb to see if it was true or not. After all, considering the sheer number of films that Cage has done over the years and the number of genres he has dabbled in during that time, it didn’t seem plausible that Hailee Steinfeld could have more oaters to her credit than him. But, astonishing as it sounds, it turned out to be true. While Cage has done several films that have included elements and themes inspired by the genre (including "Prisoners of the Ghostland," "Pig," and "Raising Arizona"), "Butcher's Crossing" was indeed the first time he had ever loaded up his metaphorical saddlebags and tackled the Western in a straightforward manner.

Cage seems determined to make up for lost time because now comes director Brett Donowho's “The Old Way,” his second stab at the genre and a far more traditional example than the more revisionist take found in his earlier effort. However, while that previous film—an environmentally conscious epic in which he played an Ahab-like frontiersman on an obsessive search for a hidden valley of buffalo that he can slaughter—was not without interest, "The Old Way" seems determined to prove that Cage’s previous avoidance of the genre was perhaps a wise move.

Cage plays Colton Briggs, a cold-hearted gunslinger going about his brutal and bloody business in the film’s prologue. However, when the story picks up 20 years later, he has left all of that behind. Now, he's married to the lovely Ruth (Kerry Knuppe), with whom he has a young daughter named Brooke (Ryan Kiera Armstrong), and runs the local general store in the nearby town. But, of course, as a slightly better movie once stated, just because he is through with the past doesn’t mean that the past is through with him. One day, after he is coerced into walking Brooke to school before opening up the store, Ruth is cornered by a quartet of men led by escaped convict James McCallister (Noah Le Gros). She doesn’t know them, but James certainly knows her husband—Colton killed his father right before his eyes when he was a small boy—and proceeds to brutally murder her as a way of sending a message to him.

When Colton and Brooke return home and discover what has happened, it doesn’t take long for him to shift into revenge mode to go off in pursuit of Ruth’s killers. The one hitch is Brooke's presence, and when his initial plan for taking care of her fails to go through, he winds up taking her along on his quest. Along the way, he teaches her to shoot and to take care of herself, and we eventually learn the explanation for their oddly frosty relationship dynamic—neither one is able to process emotions like grief and fear in “normal” ways. This may not be suitable for interpersonal relationships, but it can be an advantage when heading off on the kind of dangerous journey they have embarked upon. Eventually, the two arrive at the town where McCallister has holed up with his men to craft his elaborate revenge all those years ago.

The screenplay by Carl W. Lucas is an amalgam of bits cribbed from other Westerns (“True Grit” is perhaps the most apparent antecedent, especially in the too-loquacious-by-half dialogue) along with elements from the likes of “River of No Return” and “Unforgiven”). There are also moments that will remind Cage fans of his previous work—the previous attempt at taking care of Brooke is reminiscent of one of the more notorious scenes from “Kick-Ass,” and the basic plot will strike some as similar to the wonderful “Pig.” However, "The Old Way" never quite manages to knit these elements into a compelling narrative. Some of the plot contrivances—such as McCallister’s determination to pull off his wildly contrived and labor-intensive revenge plot instead of just shooting him when he has the chance, as he is advised to do by crusty cohort Eustice (Clint Howard)—become silly after a while. (Suffice it to say, if you are in an Old West gang and the wisest and sanest counsel comes from the Clint Howard character, you might want to try applying to another gang.) There's one potentially intriguing element to be had in the emotional quirks possessed by Colton and Brooke, but the film never develops it to any significant degree.

"The Old Way" is also hampered by what is presumably its key selling point, the Cage performance. His work isn’t necessarily bad (although there are a couple of moments where he seems to be doing a dry run for his upcoming turn as Dracula, of all things), but his primary persona is so contemporary that he inevitably feels wildly out of place in what is meant to be a traditional take on the Western. (Since “Butcher’s Crossing” was more of a commentary on the genre than an example, his presence there wasn’t quite as odd.) As the bad guy, his oddness might have been a better fit (in fact, Le Gros at times seems to be actively channeling the Cage of old as the twisted villain). Still, as the hero—even one with as many quirks as his character contains—he never manages to be especially convincing.

Perhaps if more Westerns were being made these days, “The Old Way”—which is more of a half-baked mistake than a total disaster—might have been a little palatable or at least easier to forgive. However, at a time when interest in the theatrical Western appears to be at an all-time low and when even a film as strong and vibrant as Walter Hill’s masterful “Dead for a Dollar” barely inspires any notice, even a seemingly minor misfire like this, with a screenplay that bounces between portentousness and silliness, listless execution by director Brett Donowho, and a somewhat miscast star, winds up looming larger than it might otherwise have. The Western may not be entirely dead yet, but “The Old Way” is not exactly doing it any favors.

Now playing in theaters and available on demand and on digital platforms on January 13th. 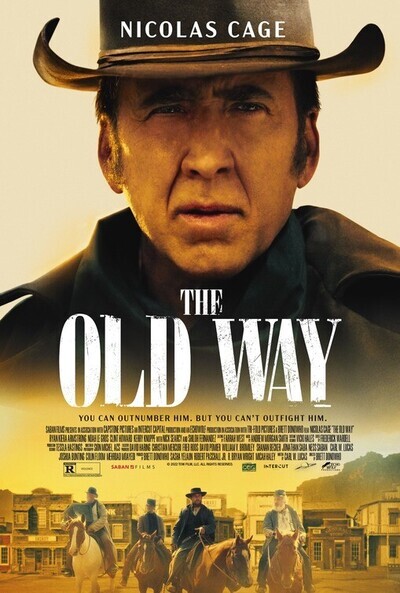