There’s something mighty bizarre with Sion Sono’s “Prisoners of the Ghostland,” unrelated to when Nicolas Cage screams, “I’ll karate chop you! Hi-f**king-ya!” Yes, there are fleeting delights to be had from this movie, especially if one loves to be surprised by absurd production design. East literally meets West in this world, as samurai and Western iconography are layered on top of each other for a setting called Samurai Town, where gory duels across genre can break out on neon-lit streets that always wants its movie-set artifice and artistic abandon to be known. But while the world that contains Cage can sometimes be eye-popping, there’s a hole at the center of “Prisoners of the Ghostland.” No movie with Nicolas Cage, directed by the wonderfully weird Japanese director Sion Sono, should be this taxing, drawn out, and plainly boring.

Cage is the type of actor whose galactic performances directly feed from the stakes of the stories he’s in—think about the intense emotional journey of “Mandy,” with heavy metal guitars accompanying his unrelenting journey into hellish revenge, and the gold that movie gave us. In “Prisoners of the Ghostland,” Cage saunters around most of the movie with a suit that is geared to blow up different limbs and also his testicles. In theory that sounds like amazing and funny character motivation, but it gets lost in whatever this movie tries to pass off for plot. You come for ideas like Cage wearing a testicle trap, and then you get rambling exposition about some ghostland boundaries, history of a nuclear explosion, flashbacks to a bank robbery involving Cage's character, and backstories for people whose emotions are played surface-level by their director.

Cage’s character (named Hero in the credits) is wearing the suit as a type of guarantee that he won’t run away, as he's been forcefully enlisted by a powerful, malevolent figure named The Governor (Bill Moseley) to return his missing daughter Bernice (Sofia Boutella) from a place called the Ghostland. If Hero tries to take it off, it detonates at his neck; if he touches Bernice, his arm will face the same fate. If he dares get excited around her, well, there’s two bulbs by his crotch. The star power of Cage’s performance, in Man with No Name mode, comes from select line-readings, a few yowling moments here, or a stolen goofy image there. It's also a little exciting (in a few bursts of ultraviolence) to see Cage in a form that he has inched toward for so long—his own version of a samurai. Only Cage could have played this type of role, but his character itself is so uninteresting beyond being played by Nicolas Cage.

This is Sono’s long-anticipated English language debut, and he treats it like a victory lap with no attention to the game. The script was written by Aaron Henry and Reza Sixo Safai, but it was undeniably taken apart and tangled by the unpredictable instincts of Sono, who is not precious in the slightest with even bits of emotion or backstory that would give us something to care about. He’s especially slight when it comes to creating momentum for the story, even though it involves a rescue mission of sorts, a “Mad Max”-like apocalypse of sorts, and a flat subplot about a samurai named Yasujiro (Tak Sakaguchi) who later adds to the movie's body count.

Sono is instead most concerned with getting every dollar out of his budget. It's all about these massive sets and the dozens and dozens of cultish-looking background characters who chant weird things and sings songs, and it’s hard to get into the joke (whatever he might think it is) when it seems it’s all one rambling set-up. The crumbling ghostland of the movie is massive, complete with a towering clock that multiple people in rags play tug-of-war with to stop time from passing, as one of the movie's many tangents. But it adds to the movie's odd, mundane nature that it's given a white and gray sheen—a far cry from the rich, heavy colors back in Samurai Town. Sôhei Tanikawa's cinematography promises great color in the beginning with the slow motion shot of a gumball machine bursting open during an over-the-top shoot-out, and it feels like a con that we then get stuck with such a drab color palette that only remind us of the story's bland stakes.

There’s the old Gene Siskel anecdote about whether a movie is more interesting than watching its actors have lunch. “Prisoners of the Ghostland” is more the case of, it would be more interesting to see its extras having lunch, preferably in their costumes. Imagine a group of people in samurai outfits, or shoulder pads with nails, or covered in toilet paper, talking amongst themselves about what they just did in a massive scene that Sono directed with the ease of a kid playing with action figures. Sometimes the movie is amusing because you can imagine its extras on the brink of laughing. But that charm wears off too, especially as "Prisoners of the Ghostland" proves to be a movie that's far better at initially surprising you than holding your attention (it's especially grating in a second viewing, I found out).

Perhaps the greatest value about “Prisoners of the Ghostland” is that it will expose numerous Cage-philes and movie fans to the filmmaking of Sion Sono, in part because it’s impossible to behold the extravagant excess of this movie and not want to know more about who made it with such abandon. Sono deserves the same kind of mainstream niche as a Quentin Tarantino or a Robert Rodriguez (I recommend Sono's “Why Don’t You Play In Hell?”, or for the more ambitious, his almighty pervert epic “Love Exposure”), and having Cage endorse him like this is a rare moment of the world doing good. Cage and Sono are truly kindred nutcases: they are artists who do not question themselves, and while they have a sense of humor stranger than we can comprehend, they are too sincere for irony. But “Prisoners of the Ghostland” is truly just a beginning; a false start to what should, and still could be one of the greatest cinematic collaborations since sound met motion. 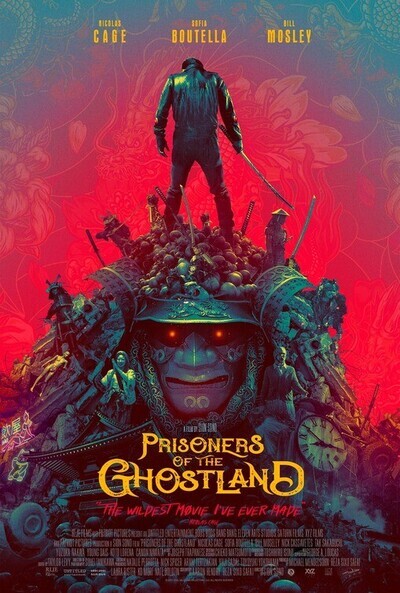