There oughta be a law against casting Tiffany Haddish in a movie that squanders her talents. Not only is she a consummate master of comedy on par with Madeline Kahn and Carole Lombard, she inherited their knack for being equally adept at evoking the blistering, chaotic winds of a hurricane and its peaceful eye. This is not to say that Haddish cannot handle something more dramatic—in “The Oath” she has a very effective crying scene. But she is at her best when her characters are dropped into escalating situations that require them to forcefully react.

Writer/director Ike Barinholtz knows this, because “The Oath” seems to build to that moment where Haddish grabs the screen and takes control. But when her big scene comes, it’s completely unsatisfying and muted, a missed opportunity floating among other missed opportunities. Her character Kai is reduced to a bland wife soothing the paranoid whims of her annoying husband, Chris (Barinholtz). You could have a fairly successful drinking game if you took a swig every time Kai says “can I see you in the other room for a minute” to Chris. Your booze of choice will be more satisfying than anything you’ll witness in that other room.

There’s promise in the premise of Barinholtz’s cinematic directorial debut. With the US so brutally divided amongst political party lines, the liberal Chris must host a peacekeeping Thanksgiving for his conservative parents Eleanor (Nora Dunn) and Hank (Chris Ellis) and his even more conservative brother Pat (Barinholtz’s real-life brother, Jon). Pat is as obnoxiously political as Chris, which puts them at each other’s throats for much of the film. Making matters worse, Pat has brought his blonde girlfriend Abbie (Meredith Hagner), who looks and sounds exactly like the Fox News anchorwoman from Hell. Also along for the ride is Chris’ sister, Alice (Carrie Brownstein), who shares his politics and, when their relatives’ opinions become too toxic, also shares her stash of weed.

Everyone is up in arms about the fictional president’s country-wide demand that all citizens sign a loyalty oath swearing their allegiance to the United States. Chris is vehemently against it, as it violates his First Amendment rights. Kai shares his opinion, but everyone else in Chris’ orbit, from co-workers to his aforementioned family, is taking the oath either out of fear or a warped sense of patriotism. “The Oath” intends to mine satirical gold with its signature requirement recalling protests like NFL players kneeling during the National Anthem. But Barinholtz’s script never hits a Swiftian mother lode; it’s just not willing to dig deep enough to cause any real damage. There’s talk of the government murdering people protesting the oath, but these details are quickly dispensed with rather than dwelled upon as soothsayers of doom.

The opening half of “The Oath” succeeds as an amusing dinner-table comedy of angry frustration like Ted Demme’s “The Ref.” Chris and Pat get off on the wrong foot immediately when Chris accidentally calls Abbie by Pat’s prior girlfriend’s name. Then the brothers get into it about the oath, with Chris showing that liberals addicted to MSNBC can be just as aggressive and pigheaded as their counterparts who are jonesing all day to conservative websites. Eleanor and Hank demand their children stop fighting while pouring gasoline on the fire. Amidst all this bickering, Kai asks to see Chris in the other room for a minute.

Then, with the sudden appearance of government officials Peter (an amusingly mellow John Cho) and Mason (a fiery Billy Magnussen), the film becomes a more sinister home-invasion movie. They are from the same agency that has been violently targeting anti-oath people. With their arrival, “The Oath” tries to darken its humor by resorting to gory mayhem and brutality, attempting to wring laughs from brain fluid dripping from ears and geysers of blood spraying comically into other people’s faces. People are tied up and shot, children are threatened, allegiances are forged or torn apart and poor, underutilized Ms. Haddish gets zapped by an illegal stun gun.

Magnussen gives the best performance in the film, which is a problem as his character is possessed by a Mark Wahlberg character from a Peter Berg movie. Mason is crazy and violent in ways “The Oath” is not willing to deal with wholeheartedly. He’s meant to be a symbol of patriotism gone horribly awry, but if Barinholtz honestly reckoned with the monster he’s created, the film would not be able to render the feel-good ending it apparently requires. In fact, “The Oath” blatantly cheats for that ending by issuing a deus ex machina so groan-inducing that it would shame the Greeks who invented the device.

Barinholtz is a likeable actor who co-wrote one of the best movies of 2016, “Central Intelligence.” That movie managed to successfully juggle action, antagonistic character comedy and relationship drama. “The Oath” has all of these ingredients as well, but adds to them the need to make a balanced yet heavy-handed political statement. The script has a lot to say, but it’s too busy at war with its messages to make a lasting statement. If this movie were a person, I’d ask to see them in the other room for a minute. 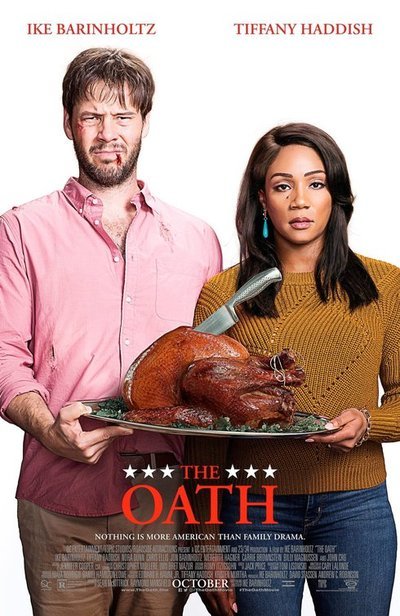 Rated R for language throughout, violence and some drug use.