In his best performances, Lou Diamond Phillips conveys a low-simmering anger just below the surface. His winning smile conceals contempt that his eyes give away. As early rock-and-roller Ritchie Valens in “La Bamba” (1987), the role that propelled him to brief stardom but an enduring career, he channels this inner resentment into an aggressive performance of Lieber and Stoller’s “Framed.” “I knew I was a victim/of someone's evil plan/When a stool-pigeon walked in and says, 'That's your man!'" he snarls while banging out nasty bar chords on a cheap guitar as a barroom brawl breaks out. “I was framed/Framed, I was blamed.”

Phillips’ latest turn in “The Night Stalker” has him playing Richard Ramirez long after the serial killer’s mid-1980s reign of terror where he crept into suburban homes and raped and killed the inhabitants, often leaving behind pentagrams drawn in blood or lipstick. Playing a once-imposing figure now declawed by cancer and confined to San Quentin’s death row, Phillips turns his signature hostility on himself by banging his head on his cell door until blood runs down his face in the movie’s opening scene.

“The Night Stalker” is coming to us on Lifetime on Sunday June 12 at 9 p.m., and will no doubt capitalize on the current appetite for true crime drummed up by the success of “The People v. O.J. Simpson: American Crime Story.” While “The Night Stalker’s” budget doesn’t afford it the slickness of “American Crime Story,” the movie still strives for a multi-layered approach to its criminal history during its 89 minute runtime.

Bellamy Young (ABC’s “Scandal”), plays Kit, a lawyer sent to San Quentin to find out if Ramirez murdered some Japanese vacationers at a hotel he used to work at during his younger days in El Paso, before he became California’s very real boogieman. She represents a man facing lethal injection for the crimes with only a few days left to get a stay-of-execution. While this plot device is historical fiction, it does have some basis in fact. In 2009, DNA testing tied Ramirez to the previously unsolved 1984 rape and murder of nine-year-old Mei Leung in San Francisco. Ramirez is known to have committed 14 murders, and suspected of several more. Ramirez died from B-cell lymphoma in 2013.

In the film, as Kit attempts to delve deeper into Ramirez’s twisted psyche, she has to confront what fascinates her about the lithesome figure. Writer/director Megan Griffiths (“The Off Hours,” “Lucky Them”) goes the “Silence of the Lambs” route here, but takes a detour through “Tightrope” (1984), the psychological thriller with Clint Eastwood as a detective who discovers he shares some of the same kinks with the killer he’s stalking. When Ramirez and Kit aren’t verbally sparring, their pasts are told through intertwining flashbacks dripping with sweat and despair.

Phillips, with that ability to radiate anger, is not just convincing but scary-as-hell as Ramirez even though he spends most of “The Night Stalker” chained to a desk and coughing up a lung. If anything, this can be too much of a good thing however, as Phillips overwhelms Young in their exchanges even more than he should. When Phillips rages about embracing evil and gold being "the metal of Christianity," Young is too often shown staring blankly in return, making me appreciate what Jodie Foster brought to her confrontations with Anthony Hopkins in "Silence of the Lambs."

In the flashback sequences, Chelle Sherrill as a teenage Kit reveals the secrets that her older self is keeping, but Ramirez already knows. While Andrew Ruiz and Benjamin Barrett are both solid as a younger Ramirez, you’re still thankful when Phillips reestablishes his presence through voiceover narration. It’s Phillips' brooding intensity that draws you into the film, and will have you locking your back windows when it's over.

It’s hard not to see “La Bamba” and “The Night Stalker” as bookends to Phillips’ career. Both Valens and Ramirez were Los Angeles County Chicanos who went by Anglicized names. Ricardo Valenzuela became Ritchie Valens because that’s what a Latino had to do to make it big in show biz back in the whitebread '50s. Ricardo Leyva Muñoz Ramírez went by Richard, and was even called Ritchie by his friends.

In both films, Phillips plays outcasts in Los Angeles’ suburban sprawl who achieve their own kind of stardom. In “La Bamba,” the same high school kids who didn’t even notice Valens earlier in the movie, clamor for his autograph after seeing him on “American Bandstand.” With his long hair and professed Santanism, Ramirez takes on the trappings of a rock star of a later era, even mesmerizing his own flock of prison house groupies who mob the San Quentin waiting area for their moment with him.

“Most come once to see what it’s like to be so close to evil,” Ramirez tells Kit with visible disgust. “They’re hobbyists.”

Valens died when he was barely 18 in the same 1959 plane crash that also took the lives of Buddy Holly and the Big Bopper, a tragedy that caps off “La Bamba” with scenes of San Fernando High School kids crying their eyes out and Esai Morales running up a hill yelling, “Ritchie!” A quarter century later, Ramirez terrorized that same San Fernando Valley where Valens hailed from. Ramirez was originally known as “The Valley Intruder” before he killed in San Francisco and was re-christened the Night Stalker by the muckrakers at the Los Angeles Herald-Examiner.

Valens died tragically. Ramirez’s death came as a relief. By playing both men, Phillips brings his career to a full circle, drawn in blood. 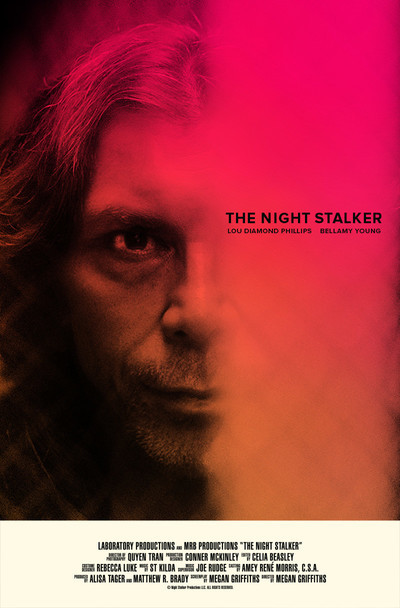