Michael Cristofer’s first film since 2001’s “Original Sin” is supposed to be another sexy noir but it’s neither sexy nor does it provide anything in the way of intrigue. Inert to such a degree that one wonders if the film has been slowed down, “The Night Clerk” doesn’t really go anywhere, truly disappointing for how much it wastes the talents of its young stars on a movie that doesn’t deserve them.

Tye Sheridan (“Ready Player One”) is poorly directed into an inconsistent performance as Bart, a young man with Asperger’s Syndrome who also happens to be a voyeur. He works as the night clerk at a reasonably nice hotel, in which he’s placed cameras in several of the rooms. He tells himself, and eventually others, that he watches the recordings to learn how people interact, something he has difficulty doing because of his condition, although he does push the pretty women to his special rooms. Even at home with his mother Ethel (Helen Hunt), Bart watches her in the rest of the house, rarely leaving his room. Bart’s Asperger’s becomes a cheap screenwriting tool for Cristofer, a way to (sort of) excuse the fact that he’s spying on people in their hotel rooms, and something that he inconsistently uses in the semi-mystery that follows.

One night, a beautiful woman named Karen (Jacque Gray) checks in, and Bart steers her to one of his surveilled rooms. He watches her as a man comes to the sliding door to meet her, and a fight breaks out. As Bart races to the room to try and help, a shot rings out. He retrieves most of his cameras, conveniently forgetting one for an officer played by John Leguizamo to find. As the officer investigates the case, Bart is quietly moved to another hotel in the same chain, where the lovely Andrea (Ana de Armas) checks in, flirting with the young man in such a way that he thinks maybe he can actually have a relationship beyond looking at a computer screen.

Of course, Andrea is the femme fatale. Of course, she’s related in some way to the original shooting. Anyone who’s ever seen a movie can put these pieces together, which makes their lackluster reveal less than thrilling. Giving Andrea a brother who also had Asperger’s feels cheap; Leguizamo is given almost nothing to do; Hunt is given less. It’s a film that feels like a first draft and a first cut, something no one had any passion at all to create, and you will have difficulty mustering any passion at all to watch.

And yet there’s still something in Sheridan and de Armas that shows you why they’re stars on the rise. Even in a film like this that has no idea what to do with their blinding charisma, both actors find little beats here and there in which it shines. A modern noir with someone like Sheridan who looks like he stepped out of ‘40s cinema and a perfect femme fatale like Ana de Armas should be more fun than “The Night Clerk.” Forget the half-baked investigation and quarter-baked love story—the real mystery here is how this movie is so boring. 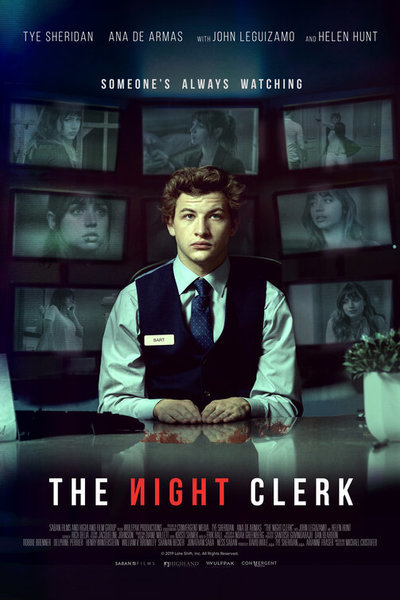