"The New Rijksmuseum" proves that films can describe nuances of character and situation as finely as the finest novel or creative non-fiction. Across four hours, we study the body language, discreet gestures and expressions of an army of museum curators, architects, art restorers, carpenters, construction workers, contractors and government beaureaucrats as they spend ten years struggling to renovate Amsterdam's great art museum. The camera singles out striking details: The tapping feet of museum executive staff, conveying anxiety over deadlines and budget problems from under the conference table. The delicate brush and chisel strokes of restorers attempting to bring ancient artworks to life without damaging their surfaces. A building superintendent who practically lives in the abandoned museum and explores its hollowed out interior as if he were tending to his children's bedroom. Curators describe the Rijksmuseum, a state funded public institution with a collection of over a million artworks, as a kind of art cathedral. Its architecture definitely evokes a house of worship, with skylights sending heavenly light down into what will be the new exhibition spaces.

One of the film's pleasures is watching museum curators, each specializing in a particular century, describe their fascination with their chosen epochs. Watching them handle and interact with their favorite pieces of art is also a joy. Menno Fitski, the museum's curator of Asian art, is infectiously boyish, like a gee whiz rocket enthusiast, when describing what his exhibition of Japanese warrior sculptures will look like when the place finally opens. It doesn't matter that the space is, in that moment, a flooded, semi-dark basement. His enthusiasm lights up the room. "My socks are soaked!" he says happily, trudging through the muddy water.

If art is the religion here, Fitski is one of the true believers who doesn't waver even as years of setbacks and compromises prompt several staff members to quit. The most demoralizing departure for the team is charismatic Director-General Ronald de Leeuw, who decides that he's had enough of haggling with the government and bicyclist advocates over the issue of a bike path through the museum. The bicyclists insist that any new museum plan must allow for the bike route that traditionally cut right through an arched roadway under the museum. De Leeuw's regime wants to get rid of the bike traffic in favor of a more elegant, contemplative entrance. The battle over the bike path rages for years in public forums and in the press. De Leuleuw's handpicked successor, Wim Pijbes, takes up the fight but eventually becomes just as bored and exasperated with appeasing bikers who rage at the museum's use of public space as if it were The Man.

"The New Risjkmuseum" delights in observing such absurd controversies and obstacles, which seem petty beside the museum's grandeur and art prostelytizing purposes. Recalling a travel journal by Cees Nooteboom, Fitski eloquently explains his curatorial passion: "[Nooteboom] was in Bali looking at all the temples and he said, 'I'm letting the knowledge flow through me so as to be able, with all this wisdom, to actually see during one moment of clarity. Does it matter that I will forget all this knowledge again? No, because the thing I won't forget is the essence, the experience.' I thought that was a great way of describing what museums are all about. You gain all this knowledge only to forget it all again, but the essence remains with you. You don't have to remember everything you see in a museum. The essence is what makes you feel like a better human being."

This documentary's director, Oeke Hoogendijk, must have taken that insight as a guiding editorial principle. "The New Rijksmuseum" is a four hour procession of minute details, an exhaustive catalogue of art world diplomacy and process, but what sticks is the way Hoogendijk weaves all the strands together, crosscutting here, overlapping there. She and her seemingly everywhere-at-once film crew capture the essence of a massive, complex enterprise that should collapse under its own weight but pushes forward by the power of collective inspiration—and government funds. 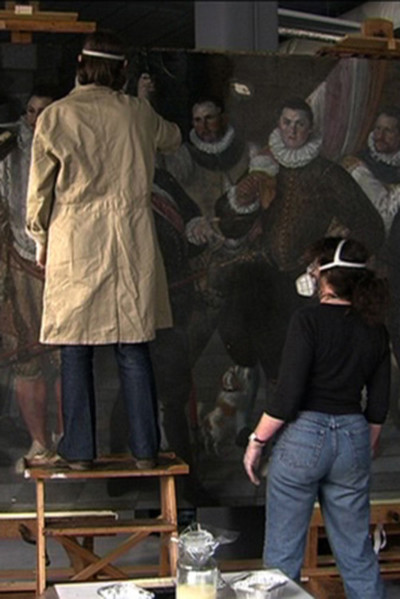