The Music of Strangers: Yo-Yo Ma and the Silk Road Ensemble

Forget more cowbell. According to the celebrated Chinese-American cellist Yo-Yo Ma, what this crazy world needs now is more pipa (a Chinese version of a lute), more gaita (a bagpipe of Spanish origin) and definitely more kamancheh (an Iranian bowed string instrument).

That is the basic message of Morgan Neville’s “The Music of Strangers: Yo-Yo Ma and the Silk Road Ensemble,” which ambitiously tries to capture the evolution of a cultural experiment involving a blend-ship of music from around the globe that began in earnest in 2000. So far, the loose collective of 50 or so members of Eurasian backgrounds has recorded seven albums (the latest, “Sing Me Home,” was released just this year) and performed for two million people in 33 countries.

Neville won an Oscar for shining a spotlight on notable back-up singers whose essential though mostly anonymous voices are heard on countless pop, rock and R&B classics in his 2013 documentary “20 Feet From Stardom.” Now he turns his attention to the artists who joined Ma, and once again proves to be adept in bringing forth the intimate stories behind the music.

Where his account stumbles a bit is when it takes broader strokes at its subject. It often turns into a kind of rah-rah, “It’s a Small World” travelogue, filled with glossy “National Geographic” views of exotic landmarks and a relentless dancing camera that spins, rushes forward and pulls back as if engaged in an elaborate waltz. The performances themselves range from tentative rehearsals early on in archival footage to semi-polished, high-energy concerts.

But much like “20 Feet from Stardom,” the doc becomes a grabber whenever it focuses on the immensely skilled and unique individuals who form this melodic melting pot. The sounds they produce might be as diverse as their backgrounds. But they share the common goal of both promoting and preserving their heritage while employing art as a buffer against the discordant upheavals that have befallen their homelands—a worthy message repeated so often that it unfortunately becomes as overbearing as an anvil chorus version of ”Kumbaya.”

The idea behind the project started with the wryly bemused Ma, who felt a growing need to define his purpose in life after being a onetime child prodigy who simply fell into becoming a cellist at age four because he was exceptional at it. As his adult son Nicholas says, “Being great at something doesn’t require a lot of introspection.” Which explains Ma’s ultimate goal in attempting to create what Leonard Bernstein once declared a universal musical language: “To find out who I am and how I fit in the world that I share with seven billion people.”

Neville soon regularly shifts away from Ma—although he later earns the distinction as probably the first and only classical cellist to make a fart joke in a movie—to primarily focus on the lesser-known foreign virtuosos. There is Iranian kamancheh master Kayhan Kalhor, who is forced to live apart from his beautiful wife because he feels threaten by the political situation in his country. Hailing from embattled Syria is clarinetist Kinan Azmeh, who is shown smuggling flutes into Jordan so he can bring the gift of music of children who are forced to live in sprawling tent-filled refugee camps. Their laughter as Azmeh leads them in a rhythmic rap song is beautiful music of a different kind.

But it is two women who steal the show. First is pipa player Wu Man, a petite Chinese whirlwind who is first seen in a guitar store banging out Black Sabbath’s “Iron Man” on an electric model of her four-string signature instrument that more frequently emits haunting, hypnotic sounds. Later, she chats with the male members of the Zhang family in the Shaanxi province of China, who provide the soundtrack for old-school live puppet shows. A smiling elder member of the clan declares that his country “has the most ancient rock ‘n’ roll,” before proving it by whooping and yelling while banging on antique instruments. Alas, the 21st-century marketplace for such entertainment is quickly dying off.

Then there is the so-called “Jimi Hendrix of the gaita," Cristina Pato, who is the first female Galician bagpiper to record a solo album in Spain. From with her rock-star outfits and dyed-green locks to the smoldering look on her face when she lustily blows into her pipes, Pato is punk enough to have headlined at CBGB’s and lends a much-needed kick-ass currency to the ensemble. Her mischievous side comes out when she taunts her mother with the tentacles of a whole octopus that is meant for her own birthday feast during a visit back home.

However, it eventually becomes apparent that Neville has perhaps bitten off more than he and his audience can possibly consume in 90 minutes. Topics such as the criticism that the Silk Road Ensemble engages in a brand of  “cultural tourism”—diluting rather than highlighting its multiple influences—are mentioned but not dealt with in depth. And some memorable contributors, such as the nimble young man who performs a hip-hop ballet in several scenes to Ma’s haunting rendition of Saint-Saëns’ “The Swan,” doesn’t even get his name flashed on the screen.

Whatever the flaws, “The Music of Strangers” does provide enough enticements to make it worth a sit, if only to see Mr. Rogers greet Ma in an old TV clip. As Pato notes, in order to keep the past alive in the present, “you have to let it grow.” Clearly, this United Nations of jam bands has planted more than enough seeds to nurture a still-thriving venture. 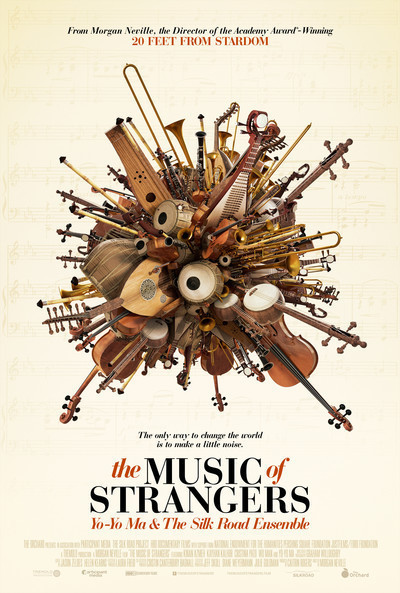 The Music of Strangers: Yo-Yo Ma and the Silk Road Ensemble (2016)

Himself as Yo-Yo Ma

Himself as Kinan Azmeh

Himself as Keyhan Kalhor

Herself as Cristina Pato

Herself as Wu Man