The Most Hated Woman in America

“My mother pissed off a lot of people, especially those she was close to.” There’s an undeniable wealth of storytelling to be culled from the life of Madalyn Murray O’Hair, a talk show regular and fighter for religious freedom who was kidnapped in the ‘90s and held for ransom. She fought back against what she saw as the hypocrisy of a religious community that shunned her after a second pregnancy as a single woman, starting a legal battle to remove prayer from schools and the words “under God” from the Pledge of Allegiance. Realizing she could make a profit as an anti-religious leader, she founded American Atheists, getting donations large enough to make her rich, and a target of those who wanted her cash. She was once called "The Most Hated Woman in America,” and the Netflix Original that tries to tell her story takes that name as well. I said tries because you have learned about as much reading this intro as you will about Madalyn Murray O’Hair in the course of this disappointing, narratively flat film.

Melissa Leo plays the controversial figure, although she’s often forced to fight through bad, old-age makeup to convey character. We see Madalyn at several key points in her life, but the majority of the film focuses on the kidnapping in August of 1995 by David Waters (Josh Lucas), Gary Karr (Rory Cochrane) and Danny Fry (Alex Frost), a trio of guys who just wanted to get $1 million and head for the border. To say it didn’t go well would be an understatement. Oddly, no one seemed to care that Madalyn, her son Jon (Michael Chernus) and her granddaughter Robin (Juno Temple) were gone. Murray O’Hair had pulled publicity stunts in the past, so the cops didn’t investigate her disappearance, even though her ally Roy (Brandon Mychal Smith) knew that she wouldn’t leave her beloved dogs at home.

Rob went to the press, getting in touch with San Antonio reporter Jack Ferguson (Adam Scott), who agreed that something didn’t look right, and started publishing stories about the Murray O’Hair disappearance. This “investigative” thread is used narratively to allow us into flashbacks about key moments in Madalyn’s life, like her activism for religious freedom and the estrangement from her son Bill Jr. (Vincent Kartheiser), who now runs a fight for religious inclusion in the school system. Perhaps most bizarrely, director Tommy O’Haver uses a lot of clips from Murray O’Hair appearances, such as when she popped up on “Donahue” and “The Tonight Show with Johnny Carson.” A 90-minute film should never include this much recreated footage you could find online.

The fact is that O’Haver and co-writer Irene Turner never settle on an angle from which to tell this story. The history of Madalyn’s life has a direct, then-this-happened biopic style. The film in which Adam Scott appears has a totally different tone, almost an outsider look at a crazy movie that could have worked on its own. And then there’s the most frustrating film of all, the kidnapping tale that feels like it needed to have dark comedy elements like “Fargo” or “Bernie” but just comes off as flat and manipulative. Oh, I forgot one film—the story of an estranged son. This is the most bizarrely melodramatic arc, as if O’Haver thought it would add emotion to a story, but he doesn’t have enough time to devote to it for it to register beyond a cautionary tale on how not use a manipulative score.

Clearly, any one of these films might have worked. Make the kidnappers the protagonists and tell the story of a trio of ne’er-do-wells who stumble into a life-changing crime. Make the journalist the protagonist, and procedurally show us how he solved the kidnapping the police ignored. You could even tell the life story of the O’Hairs in a way that focuses on her family, and ends with the headline-grabbing kidnapping. You simply can’t tell all of these stories effectively in a 90-minute movie and give viewers any sort of character or insight. It results in a film that is simultaneously too much and nothing at all because it’s jumping around so much narratively. And none of this haphazard storytelling is helped by a complete lack of visual language.

Through it all, a few performances actually increase the disappointment, for one wishes they were in a better film. Leo is perfect casting as a woman whose acerbic personality helped define her. Every time I see Josh Lucas, I wish he was in more movies, and he uses his physically imposing presence here in a way he’s not often allowed to. And then there’s Adam Scott, increasingly one of those actors who makes everything better. At one point, he says, “I thought there might be a story here.” There is, but “The Most Hated Woman in America” doesn’t really tell it. 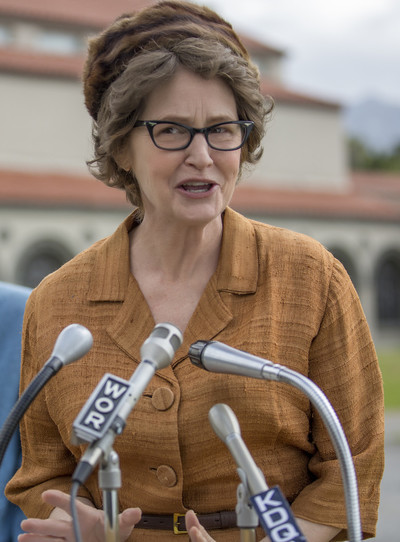