The Mind of Mark DeFriest

“Mark reacts.” Those two words may be the best way to describe Mark Defriest, one of the most infamous prisoners in the Florida penal system. He’s a man who doesn’t sit still, even if his reactions lead to more harm than good. His story, chronicled in “The Mind of Mark Defriest” is an infuriating one in that you want to shake everyone involved and ask them what the purpose of incarceration really is in today’s society. Mark Defriest is not a dangerous man to society. He’s clearly mentally ill. And yet, after being sentenced to a ridiculously high four years for stealing tools that he obviously thought belonged to him after the death of his father and before the will could be processed, Defriest has now spent 34 years behind bars, and, at the time of the initial documentary filming, was scheduled for parole in 2085. A series of prison escapes and serious DRs (Disciplinary Reports) kept pushing his release date well past the norm, and his behavior behind bars has put him in solitary confinement for 27 of the last 34 years. Mark reacts, and the prison system reacts back.

Directed by Gabriel London, most of “The Mind of Mark Defriest” consists, naturally, of Mark telling his ridiculous story, sometimes in his own words and sometimes through animated reenactments with the voices of Scoot McNairy as Mark and Shea Wigham as other characters. Defriest was first jailed in 1979 after the death of his father. He went to pick up some tools that he thought belonged to him, and his mother accused him of stealing them. The 19-year-old was given four years for the theft, but with good behavior would likely have been out much sooner. Mark couldn’t be contained behind bars. He would craft prison items into weapons, including guns, and escaped more than once, being re-captured every time and adding more years to his sentence.

The first act of “The Mind of Mark Defriest,” in which many of Mark’s more remarkable behind-bars behaviors are chronicled, is a little too haphazard for its own good. As fun as McNairy’s line readings can be, I wanted less animated memories. Defriest is a fascinating subject in his own right, and, from the very beginning, the film works best in the moments when it lets him talk instead of its flashy, sensationalistic ones. Director Gabriel London didn’t need to skew every angle and quick cut every interview. There’s so much story here, let it tell itself instead of weighing it down in movie effects.

Surprisingly and refreshingly, that’s kind of what London does about halfway through as the animated memories let up and we spend way more time with Defriest and the people trying to get him out of jail, including the medical professional who once declared him “malingering” (faking mental illness to get out of sentencing) but now firmly believes that Mark has serious competency issues. Is Mark mentally ill or is it one of his tactics? He does things that are clearly harmful to him and his legal situation. Isn’t that a kind of mental illness in itself? As the doctor says, “People can be planful in the service of strange ideas.” Just because Mark has the wherewithal to plan and scheme doesn’t make him mentally competent.

It’s also remarkably smart of London to get the warden of the Florida State Prison involved to corroborate Mark’s reports of the terrifying conditions behind bars. At different times in his incarceration, Mark was gang-raped, kept as a “girlfriend,” and forced into a solitary condition in which he had no lights, running water, utensils, or clothes. It’s hard to believe that this is happening in the United States, and one hopes “The Mind of Mark Defriest” forces further investigation into sanctioned torture happening in our penal system.

“The Mind of Mark Defriest” is the rare documentary that gets more and more interesting as it goes along, even ending with an update on this still-unfolding story that just took place. As Mark’s story gets less headline-grabbing (prison escapes! makeshift guns!), London allows the movie to really focus on its subject in all its fascinating complexities. How can a man known as the Prison Houdini do so many things that sabotage his own life? And is the only response our system can muster up for someone like Mark Defriest further punishment? Just because “Mark reacts,” doesn’t mean our legal or mental health systems need to do the same. 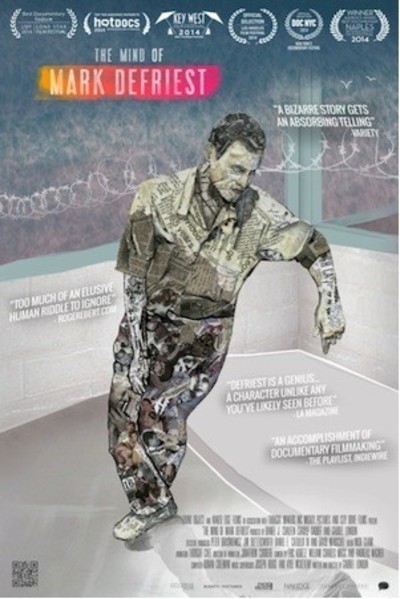