The obscenely wealthy are having a tough time at the movies lately. Last month, Ruben Östlund stuck a bunch of them on a luxury yacht and watched them projectile vomit all over each other in “Triangle of Sadness.” Next week, Rian Johnson will stick a bunch of them on a private Greek island to watch them wonder who among them is a killer in “Glass Onion: A Knives Out Mystery.”

But this week, members of the extreme 1% just get stuck—as in skewered, and grilled—in “The Menu.” Director Mark Mylod satirizes a very specific kind of elitism here with his wildly over-the-top depiction of the gourmet food world. This is a place where macho tech bros, snobby culture journalists, washed-up celebrities, and self-professed foodies are all deluded enough to believe they’re as knowledgeable as the master chef himself. Watching them preen and try to one-up each other provides much of the enjoyment in the sharp script from Seth Reiss and Will Tracy.

But the build-up to what’s happening at this insanely expensive restaurant on the secluded island of Hawthorne is more intriguing than the actual payoff. The performances remain prickly, the banter deliciously snappy. And “The Menu” is always exquisite from a technical perspective. But you may find yourself feeling a bit hungry after this meal is over.

An eclectic mix of people boards a ferry for the quick trip to their storied destination. Chef Slowik’s fine-tuned, multi-course dinners are legendary—and exorbitant, at $1,250 a person. “What, are we eating a Rolex?” the less-than-impressed Margot (Anya Taylor-Joy) quips to her date, Tyler (Nicholas Hoult), as they’re waiting for the boat to arrive. He considers himself a culinary connoisseur and has been dreaming of this evening for ages; she’s a cynic who’s along for the ride. They’re gorgeous and look great together, but there’s more to this relationship than initially meets the eye. Both actors have a keen knack for this kind of rat-a-tat banter, with Hoult being particularly adept at playing the arrogant fool, as we’ve seen on Hulu’s “The Great.” And the always brilliant Taylor-Joy, as our conduit, brings a frisky mix of skepticism and sex appeal.

Also on board are a once-popular actor (John Leguizamo) and his beleaguered assistant (Aimee Carrero); three obnoxious, entitled tech dudes (Rob Yang, Arturo Castro, and Mark St. Cyr); a wealthy older man and his wife (Reed Birney and Judith Light); and a prestigious food critic (Janet McTeer) with her obsequious editor (Paul Adelstein). But regardless of their status, they all pay deference to the star of the night: the man whose artful and inspired creations brought them there. Ralph Fiennes plays Chef Slowik with a disarming combination of Zen-like calm and obsessive control. He begins each course with a thunderous clap of his hands, which Mylod heightens skillfully to put us on edge, and his loyal cooks behind him respond in unison to his every demand with a spirited “Yes, Chef!” as if he were their drill sergeant. And the increasingly amusing on-screen descriptions of the dishes provide amusing commentary on how the night is evolving as a whole.

Of these characters, Birney and Light’s are the least developed. It’s particularly frustrating to have a performer of the caliber of Light and watch her languish with woefully little to do. She is literally “the wife.” There is nothing to her beyond her instinct to stand by her man dutifully, regardless of the evening’s disturbing revelations. Conversely, Hong Chau is the film’s MVP as Chef Slowik’s right-hand woman, Elsa. She briskly and efficiently provides the guests with a tour of how the island operates before sauntering among their tables, seeing to their every need and quietly judging them. She says things like: “Feel free to observe our cooks as they innovate” with total authority and zero irony, adding greatly to the restaurant’s rarefied air.

The personalized treatment each guest receives at first seems thoughtful, and like the kind of pampering these people would expect when they pay such a high price. But in time, the specifically tailored dishes take on an intrusive, sinister, and violent tone, which is clever to the viewer but terrifying to the diner. The service remains rigid and precise, even as the mood gets messy. And yet—as in the other recent movies indicting the ultra-rich—“The Menu” ultimately isn’t telling us anything we don’t already know. It becomes heavy-handed and obvious in its messaging. Mind-boggling wealth corrupts people. You don’t say.

But “The Menu” remains consistently dazzling as a feast for the eyes and ears. The dreamy cinematography from Peter Deming makes this private island look impossibly idyllic. The sleek, chic production design from Ethan Tobman immediately sets the mood of understated luxury, and Mylod explores the space in inventive ways, with overhead shots not only of the food but also of the restaurant floor itself. The Altmanesque sound design offers overlapping snippets of conversation, putting us right in the mix. And the taunting and playful score from Colin Stetson enhances the film’s rhythm, steadily ratcheting up the tension.

It’s a nice place to visit—but you wouldn’t want to eat there. 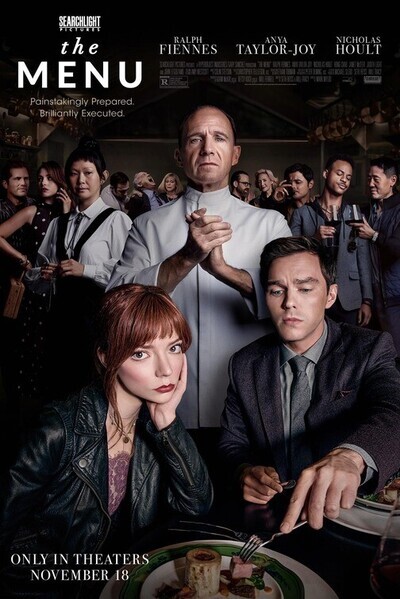 Rated R for strong/disturbing violent content, language throughout and some sexual references.