The Man Who Sold His Skin

Both a satire of the elitist and manipulative art circles, as well as a critique of the world’s dehumanizing apathy towards the international refugee crisis, “The Man Who Sold His Skin” fancifully intertwines the two aforementioned and seemingly unrelated subject matters. And while it does tell a story with somewhat labored twists and turns, writer/director Kaouther Ben Hania’s film is so approachable and compulsively watchable that just ten minutes into it, one understands why it was nominated for a Best International Feature Academy Award this year, over some of the more challenging movies on the Oscars shortlist.

Indeed, underneath that alarming title lies a thoroughly accessible (if not somewhat scheming) film, about a passionate and resourceful Syrian refugee who goes to extreme lengths in navigating his dire circumstances to ultimately reunite with the love of his life. His sacrifice entails loaning his bare back as a canvas for an intricate tattoo by an internationally acclaimed yet controversial artist, just to gain freedom of movement around the world as a piece of traveling human art. While this all sounds like an unlikely scenario, Ben Hania reportedly drew her inspiration from a real-life contract from the late 2000s, between Belgian artist Wim Delvoye and his live stretcher Tim Steiner. After 40 hours of tattooing, Delvoye created an elaborate artwork on Steiner, which he then sold to a German art collector for an unspeakable sum; a pact which meant that upon his death, Steiner’s back would eventually be skinned and framed.

In “The Man Who Sold His Skin,” the spontaneous Sam Ali (a delightful Yahya Mahayni) is exactly the kind of person who’d say yes to a transaction of this sort. Madly in love with the upper-class, crystal blue-eyed Abeer (Dea Liane), Ali gets separated from her suddenly due to a terrible political misunderstanding and finds that he has to flee to Beirut in a hurry. There, he meets the world-famous artist Jeffrey Godefroi (Koen De Bouw) by chance at a party that he’s crashed. Unable to accept that the obedient Abeer has been married to a well-off man under family pressure, he impulsively accepts Godefroi’s condescending offer and gets inked with the print of a massive Schengen visa on his back, traveling from gallery to gallery with Godefroi and the sharp-tongued dealer Soraya Waldy (Monica Bellucci, infusing the movie with major star appeal) in the aftermath.

The film’s ideological values are so plainly spelled out that it's hard to find “The Man Who Sold His Skin” politically rousing or eye-opening. In fact, the machinations of Sam Ali's crisis often feel offensively oversimplified in terms of its observations around identity and class. On the surface, Ben Hania tries to emphasize that Ali sells a part of his humanity and displays the permanent political graffiti on his body to privileged audiences out of desperation, in exchange for a right he should already have as a human being. But in trying to sensitively dissect the exploitative nature of the outrageous arrangement Ali accepts, Ben Hania’s film comes dangerously close to being another form of exploitation itself; one that utilizes the plight of a refugee for a clever but superficial story with a questionable-at-best twist. Also defective is Ben Hania’s depiction of the contemporary art scene, something that was done so brilliantly and multifariously in Ruben Östlund’s “The Square.” Here, the central artist’s fame and talents never feel all that believable, even though the filmmaker works overtime to telegraph his legitimacy. But all her efforts somehow achieve the opposite.

Still, Ben Hania maintains an undeniably light and assured directorial touch over the material, which compensates for some of the script’s thematic shortcomings. In that regard, she's most effective when she stays close to the romance between Ali and Abeer. A lovely sequence in the movie’s early moments when the duo confesses their love for each other on a train, and spark a little party among all other passengers, is especially beautiful and strikingly filmed. Along with her cinematographer Christopher Aoun, Ben Hania demonstrates her visual panache elsewhere too, using vibrant colors, slick compositions, and reflections in support of her art-centric narrative. While it hardly breaks new ground, “The Man Who Sold His Skin” still manages to be a breezy watch, with an assured filmmaker gently steering it through a rough-around-the-edges tale. 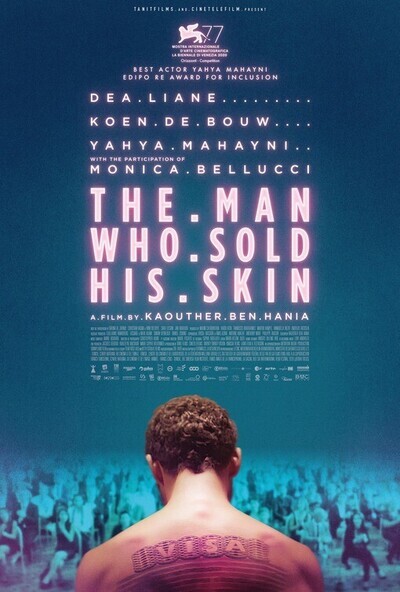