As the title characters of "The Lovebirds," Issa Rae and Kumail Nanjiani are believable as a couple that clicks so well as pals that they wrongly assume the boyfriend-girlfriend part is going to be easy, too, then end up trapped in an increasingly unpleasant partnership. As we all know from movies, when lovers are struggling with irreconcilable differences, the best way to reconcile them is to immerse them in a criminal conspiracy that requires them to play detective while trying not to get murdered. Who needs couples therapy when you can go on the run and risk death to clear your name?

Leilani (Rae) and Jibran (Nanjiani) are introduced in a prologue, set the morning after their first night together. They shyly contrive reasons to keep hanging out even though cool-person dating rules require them to go their separate ways and act as if their hookup was no big deal. In a brisk montage, director Michael Showalter establishes their connection, making it seem as if they're one of those couples who click so well that they'll skip to marriage and happily-ever-after.

Then the story jumps ahead four years, revealing that the magic force field of cute/funny/horny that once protected Leilani and Jibran from reality faded. Now they're grinding on each other's last nerve. Where did the magic go? Was there ever really magic? Things are so tense that they're both wondering why they haven't called it quits yet.

Leilani, an advertising executive, is a spontaneous person who wishes her boyfriend would take more risks. Jibran, a documentary filmmaker, is a planner who thinks everything should be scheduled down to the smallest detail, the better to eliminate surprises. (This even includes "freaky sex," which, as Leilani rightly notes, isn't something you can schedule. If you schedule it, how freaky can it be?) Leilani thinks Jibran has become pretentious and bitter. Jibran thinks Leilani is a trivial narcissist who can't go five minutes without refreshing her Instagram page, and suspects that she has a crush on a coworker.

Their arguments in the film's first ten minutes show how couples that genuinely love each other still can talk past one another, not because they aren't listening (though that's often the case) but because they engage with the world in wildly different, maybe incompatible ways. This is subtly acted by both leads, especially when the characters fall silent and you see shades of doubt and sadness flicker across their faces. These moments also prime you to expect a more realistic, low-key comedy-drama about a couple coming apart, which is not what "The Lovebirds" ever intended to be. That's a minor shame. Based on available evidence, the stars would have been up to the job. The last Showalter-Nanjiani collaboration, "The Big Sick," was that kind of film, and the end product was fresh and sweet.

Still, there's something to be said for a comedy that throws Rae and Nanjiani, world-class whiner-yellers, together in a tale that requires them to rush from place to place, bickering about strategy and past mistakes when they aren't hassling the other to sign off on an improvised plan that could make things worse.

How much do you need to know about the conspiracy? Not much if you've seen "Game Night," which was less tortuously plotted but had a similar feel, down to the shocking bursts of violence, panicky overlapping dialogue, and hilariously solemn techno-thriller score (by Cliff Martinez in "Game Night" and Michael Andrews here). Or for that matter, any of the modestly budgeted noir-comedies that followed in the wake of Martin Scorsese's little-seen but ultimately influential "After Hours"—a proud tradition that includes classics like "Something Wild" (a touchstone for Showalter's 2014 knockabout romantic comedy "They Came Together").

You know most of the beats that "The Lovebirds" is obligated to hit a long time before it hits them. But it hits them with such confidence, and the stars are so clearly enjoying each other's company, that this is a mostly enjoyable, sometimes very funny ride. As laid out by screenwriters Aaron Abrams and Brendan Gall, and as directed by Showalter—who has a flair for slapstick violence—the couple accidentally commits a crime that is obliterated by a more serious and frightening crime, which of course they get blamed for because the perpetrator (a corrupt cop, chillingly played by ace character actor Paul Sparks) flees the scene to avoid additional incoming witnesses rather than stick around to kill the two who saw him do the deed.

There are occasional nods to the reality of being a nonwhite couple in the United States, as when they assume that a patrolman is giving them the stink-eye because he's recognized them as suspects in a manhunt, then sigh with relief as they realize he's probably just a garden-variety racist. But for the the most part, this is a showcase for witty banter and slapstick tomfoolery. Fans of "Game Night" will also be amused, or maybe puzzled, to find that "The Lovebirds" is another R-rated, relationship-based action comedy that's fixated on Stanley Kubrick's "Eyes Wide Shut." There are evil rich people, incriminating photos, rumors of a secret gathering, a police investigation that assumes that the most obvious answer to the puzzle must be correct, and so forth. And creepy masks, because you gotta have those.

Leilani and Jibran are regularly put in positions that require their characters to beg for their lives, suffer agonizing and often preposterous injuries while trying to swagger like action film stars, and make bold escapes that let them catch their breath long enough to get pulled into another bad situation. This is a good thing, because the endless string of crises activates the stars' comedic chops, and provides the film with its best bits—as when a couple of baddies capture Leilani and Jibran, tie them to chairs in a barn, and offer them the choice of a hot skillet full of bacon grease to the face or an unknown menace behind behind a locked wooden door. Whatever's behind that door couldn't be worse than hot bacon grease in the face, right? But what if the bad guys are bacon grease fetishists? Maybe they want them to choose the grease? Did you think of that? Well, did you?

Classic Hollywood buffs might also be reminded of the long-running "Road to..." film series, which starred Bing Crosby and Bob Hope as, respectively, a suave, resourceful straight man and a smart-alecky, blabbering goofball, although his film deviates from the Hope-Crosby formula by letting both Rae and Nanjiani play the Bob Hope part: the chatterbox doofus who is mainly interested saving his and his partner's skin, says the wrong thing even when he's being sly, and accumulates ugly new outfits and humiliating injuries as the story unfolds.

Nanjiani is never funnier here than when Jibran is trying to talk people out of battering, tormenting or killing him, all while paradoxically being so smug and irritating that you can see why they can't wait to treat him as a piñata. Rae matches Nanjiani double-take for double-take, channeling Lucille Ball at her most cluelessly confident. The post-credits scene assumes audiences will like these characters enough to demand a sequel. Don't be surprised if they get one. 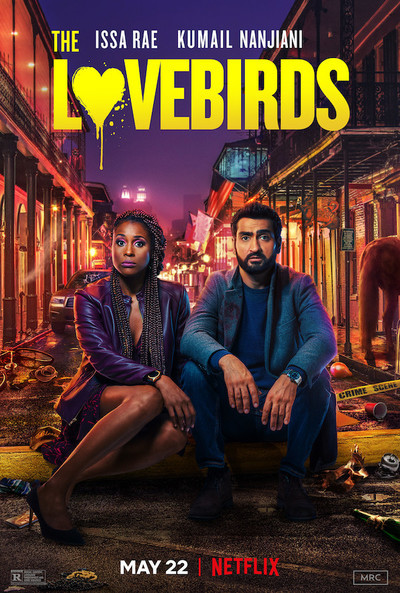 Rated R for sexual content, language throughout and some violence.