In preparing to review the new thriller "The Loft," I was surprised to discover that not only is it a remake of a 2008 film that was an enormous hit in its native Belgium, it was previously remade in the Netherlands in 2010--indeed, the film's director, Erik van Looy, not only helmed the original but also worked on the Dutch version as well. I am not surprised by the fact that this story has been told three times in such a short period of time--hey, the beloved classic "The Maltese Falcon" was actually the third cinematic go-around for that tale in less than a decade. No, what surprises me is that I would have thought that by this third stab at this particular narrative, all of the implausibilities and idiocies would have been ironed out. Alas, this long-delayed would-be erotic thriller is a shabby bore that promises viewers any number of kinky thrills and then proceeds to deflate those expectations.

The film centers around five pals—smarmy architect Vincent (Karl Urban), nice guy psychiatrist Chris (James Marsden), quiet nebbish Luke (Wentworth Miller), loudmouth horndog Marty (Eric Stonestreet) and borderline psychopath/Chris's half-brother Philip (Matthias Schoenaerts, another refugee from the Belgian original)—who are in marriages that are not particularly satisfying to them for various reasons. Assuming that they all desperately want to cheat on their wives but are leery of doing for fear of getting caught, Vincent hits upon the perfect solution—the five of them will quietly purchase a spacious loft apartment in a new building that he has designed and use it for their assignations. There are any number of reasons to instantly reject such a proposal as being impractical at best and idiotic at worst (Who washes the sheets? What happens if two of them show up at the same time? What if one of them threatens to blackmail the others in order to get out of his turn doing the dishes?) but none of them occur to them and they all sign on.

For a while, all goes well and even the initially reluctant Chris joins in the fun as well once he meets the sexy Anne (Rachael Taylor), the sister of a former patient who committed suicide. However, it is all fun and games until someone dies a horrible death, and indeed, one morning, Luke arrives to discover the corpse of a strange blonde handcuffed to the bed with her wrist slashed. After the others arrive, it becomes apparent that since there are only five keys to the loft, one of them has to have been at least somewhat involved in the girl's death. While they try to piece together what happened and who is hiding what, we are treated to a series of extended flashbacks that reveal more about the guys, their increasingly twisted relationships with their women and with each other, the identity of the suicide blonde and the circumstances that presumably led at least one of them to commit murder.

In other words, "The Loft" is like a combination of "The Apartment," minus the caustic wit and interesting characters, "Reservoir Dogs" sans the powerful sexual tension and a below-average episode of "Law & Order SVU." Actually, that description makes it sound far more interesting than it actually is. Having never seen the first two versions, I cannot say for certain how this one compares to its ancestors but either something got horribly lost in the translation or it the Belgians and Dutch are a lot more forgiving when it comes to substandard thrillers. The plot is a convoluted mess that veers back and forth in time with little rhyme or reason and is never close to being as smart and clever as it thinks it is. Screenwriter Wesley Strick completely drops the ball here—the dialogue is trite, the characters are paper-thin and universally unpleasant and uninteresting and the denouement is borderline laughable in its attempts to tie all of the plot lines together while still yanking the rug out from under viewers.

As for van Looy (whose 2003 thriller "The Memory of a Killer" is as good as this one is awful), he appears to be on autopilot the entire time, presumably out of sheer boredom, because there is not one cinematically interesting moment to be had. The actors are pretty much coasting throughout as well for the most part with as little energy and enthusiasm as possible. The one exception to this is Eric Stonestreet, who seems so thrilled at the prospect of playing a character so different from the one he portrays on "Modern Family" that he overplays every scene to the point where you may find yourself involuntarily flinching every time he comes on screen. As for the women, they are pretty much depicted throughout as either shrews or prostitutes and the film's ultimate attitude towards them can probably be divined by the fact that the  two main actresses—Taylor and Isabel Lucas—are refugees from the "Transfomers" franchise.

"The Loft" is a film that seems to have been designed specifically to appear in empty theaters in the dead of January. It is a total wash as a thriller, it is too clunky and simplistic to work as a mystery, it has no insights into male psychology that could make it work as a drama and its erotic quotient is so minimal that it could only be a turn-on to people who consider HGTV to be pornography. The best thing about it is that it is so utterly disposable that it will quickly be forgotten and everyone involved can go on to presumably better things. 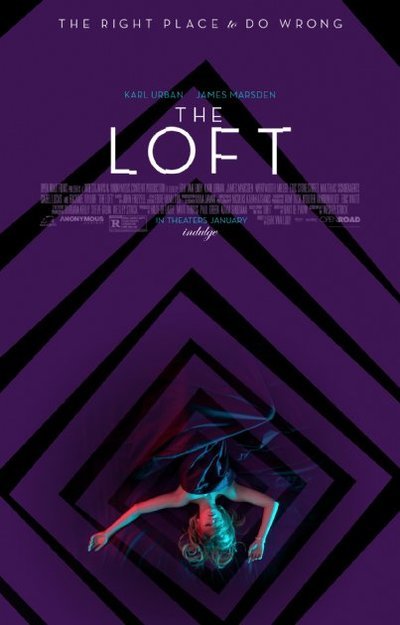