Antoine de Saint-Exupéry’s “Le Petit Prince” has been translated into more than 250 languages and reportedly sold over 140 million copies worldwide. It is in millions of homes, having been read to millions of children. There have been radio plays, television adaptations and film versions. So why tell this story again? Could Mark Osborne, the director of “Kung Fu Panda,” really have something new to say regarding this timeless tale? And how do you adapt a relatively thin novella into a feature film that will keep kids entertained and adults entranced? “The Little Prince,” premiering on Netflix this Friday after Paramount inexplicably dumped it earlier this year (and after it has made almost $100 million worldwide) takes the themes of its source material and expands on them to create a lovely, big-hearted tale of adventure, friendship and imagination. Without a single pop song to be heard or a bodily humor joke to be endured, “The Little Prince” doesn’t talk down to its audience, treating them with the respect that so few American family films bother to do. It is a cinematic crime that the abrasive garbage that is “The Angry Birds Movie” and “Ice Age: Collision Course” get national releases while most people don’t even know “The Little Prince” is coming to win their hearts this weekend.

Osborne and his team shift focus to a new protagonist, “The Little Girl” (beautifully, richly voiced by Mackenzie Foy), a smart heroine who is essentially being trained by her mother (Rachel McAdams) for the big, dangerous world of being an adult. She’s trying to get into the prestigious Werth Academy and her mother has her entire summer vacation planned out on a big board. Let’s just say, in this community in which all the homes look identical and every neighborhood is designed like a grid, this poor girl is going to be doing a lot of studying and not a lot of playing. Until she meets her neighbor.

While her single mother is at work, The Little Girl strikes up a friendship with the old man who lives next door. In a house that contains all the curves and quirks missing from the rest of the neighborhood, “The Aviator” (Jeff Bridges) tells his new friends stories, including the time he met “The Little Prince.” The details of The Aviator’s stories aren’t nearly as important as the themes they convey. As The Aviator relays stories of “The Rose” (Marion Cotillard), “The Fox” (James Franco), “The Snake” (Benicio Del Toro), and others, we watch The Little Girl come out of her shell. She’s fascinated by The Aviator’s drawings (which will be familiar to fans of the book) and learns the lessons that they just don’t teach you at school, even the Werth Academy. As it should be, “The Little Prince” is heavy with philosophical observations like “Growing up is not the problem, forgetting is” and “It is only with the heart that one can see rightly.” It’s notable that Osborne and company aren't afraid of deeper themes. It could have been tempting to turn “The Little Prince” into a wacky adventure movie (I guarantee there have been scripts of that nature on Hollywood desks), but Osborne’s take is deeply emotional and heartfelt. It gets a little repetitive in the mid-section, but the final act, which I won’t spoil, essentially brings The Aviator’s stories and lessons to life, making the journey worthwhile.

It helps one overlook the narrative and philosophical repetition that the film is accomplished on a technical level as well. Most notably, the score, co-composed by Hans Zimmer, is a lyrical, lovely piece of work. It carries the viewer along, fluidly tying together the worlds of “The Little Prince” (both the girl’s and the story of the prince). Visually, the first act of the film, with its square trees to match its square houses, reminded me of the suburban rigidity of the first act of Brad Bird’s “The Incredibles,”  while visions of the world of the title character reminded me of LAIKA gems like “Coraline” and “Paranorman.” These are good comparisons to make when one watches a family film. It’s in good company.

Ultimately, “The Little Prince” is a film that everyone should be happy to show their children. They might get a little bored, but if they even take away a positive theme or two, it’s worthwhile. And, in the end, adults might remember an important truth about the world as well. Becoming an adult doesn’t mean giving up on dreams, whimsy, imagination or love. It’s a lesson that children’s fiction has been teaching us since long before Saint-Exupéry published his hit novella. And yet in a world that seems increasingly dominated by hate speech and stories of violence, it’s one that we could stand to learn again. 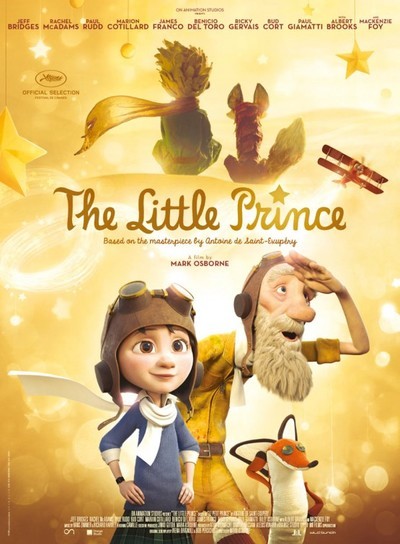 Jeff Bridges as The Aviator (voice)

Rachel McAdams as The Mother (voice)

Marion Cotillard as The Rose (voice)

James Franco as The Fox (voice)

Bud Cort as The King (voice)

Albert Brooks as The Businessman (voice)