The Legend of Hercules

I think I just watched an early sneak of the "300" sequel that isn't due until March. But for some reason, it's called "The Legend of Hercules".

I kid. But, clearly, director Renny Harlin (of "Die Hard 2" fame and "Cutthroat Island" infamy) and his CG-manufacturing minions wouldn't mind if you made that mistake, considering they have borrowed most of the visual tricks that have become the signature of that franchise. De-saturated color scheme? Check. Annoying stuttering slo-mo action sequences? Check. Legions of faceless warriors who don't require a SAG card? Right on.

Perhaps to camouflage that blatant co-opting, there are also snatches of "Gladiator", "Ben-Hur", "Spartacus", video-game-inspired arena matches and an aged scholar named Chiron who sounds as if he wandered in from a touring company of "Fiddler on the Roof".

In fact, one of the few original ideas, presumably to somehow justify the use of 3-D technology that is quickly growing out of favor with paying customers, is the repeated image of white objects that inexplicably flutter down from the sky and project into the audience. They could be ashes, rose petals or dandelion fluff—or all three.

My theory? These particles are Zeus's dandruff. After all, the god of thunder and Hercules's daddy has good reason to get his dander up. His half-human son is not only in a mess of a movie, he is in a mess of trouble onscreen thanks to the schemes of a tyrannical king of a stepfather who is so evil he practically twirls his beard.

Not helping matters is that Hercules is played by Kellan Lutz, best known as Emmett Cullen, the brawny joker of the vampire clan in the Twilight series. True, stepping into the sandals of the giants who have portrayed the legendary Greek strongman before—Steve Reeves, Arnold Schwarzenegger, Lou Ferrigno and even Ryan Gosling (go ahead and Google it) among them—can't be the easiest task.

However, if you are going to brave a genre as kitschy as this, you have to know how to slice the cheese with tongue-in-cheek finesse. And while Lutz might possess the beefcake to fill out his chest armor, he lacks the acting chops to make us much care about the fate of his gleaming hero who looks as if he just stepped out of a Beverly Hills salon. Not helping is that, like Superman, his character is pretty much invincible in every challenge he encounters.

Unfortunately, the rest of the cast offers little compensation. The primary roles are filled with mainly British and Australian unknowns, save for American actor Johnathan Schaech, who was hot stuff back when he starred in 1996's "That Thing You Do!"

Once Hercules's mortal mother Queen Alcmene (Roxanne McKee) becomes impregnated by the seed-planting spirit of Zeus (an event that transpires in a bizarre bedroom scene that recalls "The Exorcist" but sexier) for the sake of delivering a savior who could bring peace to the land, all hell breaks loose. Her hot-headed husband, King Amphitryon (Scott Adkins), immediately suspects the super-sized child is not his and takes measures to ensure the interloper's life is miserable when he comes of age.

His accomplice in this mission is elder son Iphicles (Liam Garrigan), who looks as if he could be the illegitimate spawn of Rowan Atkinson's Mr. Bean. Not only does the snotty brat resent that his mother and nearly everyone else favors Hercules (who goes by another non-god-like name initially but it really doesn't matter), but also that Mr. Muscles is in a hot-and-heavy relationship with the very model-pretty princess who is expected to be his intended.

This royal soap opera eventually causes Hercules to be sent off to certain doom while leading a group of warriors through Egypt. Instead, he handily survives every life-threatening situation he encounters and eventually avenges his wrong-doers. Blah, blah, blah.

It's a mystery why Harlin and his writers decided to eschew all the juicy bits of Herculean lore for this dull idealized interpretation. They could have had him undergoing the traditional 12 labors, facing off with such potentially cool opponents as the nine-headed Hydra and the Cretan bull instead of only slaying the most unrealistic movie lion since Bert Lahr in "The Wizard of Oz".

Who wouldn't want to see him snatch away the girdle of Amazon queen Hippolyta (which probably sounds more hubba-hubba than it actually is)? Perhaps, they did not want to be too similar to "Clash of the Titans". But why not steal from that, too?

Instead, there is much screen time devoted to Lutz and his luminous lady love bathing in scenic springs and rolling in zee hay. Although their romantic frolicking does lead to one of the film's lone laughs. When Iphicles inquires whether Hercules has taken the princess's "maidenhood," the bulky dude counters: "I assure you, brother (pregnant pause) it's none of your business."

It may or may not be a good thing that summer will bring a second attempt at reviving Hercules on the big screen with Dwayne Johnson in the lead and directed by Brett Ratner. But with the bar set this low, surely the performer formerly known as The Rock doesn't have to strain himself too hard to pump up the entertainment value. 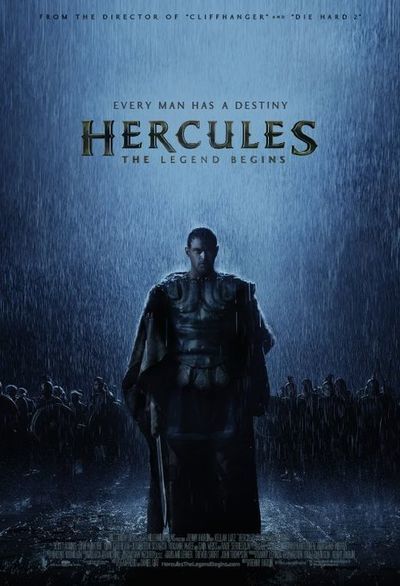