The Last Thing He Wanted

Dee Rees’ “The Last Thing He Wanted” is incomprehensible to an almost impressive degree—usually when a movie's narrative gets so out of control, it over-corrects itself at some point before the end. But not here. This international anti-thriller, which freely mixes hardworking journalism and weapons smuggling, continues to blaze its own path of gibberish up through a disastrous finale, an uncharacteristically slow shot that had my audience at the Sundance Film Festival laughing out loud.

It’s the kind of movie that establishes one major detail or location, and then veers toward the next big one, and never lets us settle in. The first 15 minutes or so, for example, establish that Anne Hathaway’s extremely dedicated journalist Elena McMahon has done some heroic work in Nicaragua; along with her peer Alma (Rosie Perez), they escape the country in a thrilling shot that goes from outside the airport onto the runaway in one swoop. Moments later, Elena is back behind a desk at her job at the Atlantic Post, but her work has been stagnated by her employers, who want her to cover the 1984 election, which infuriates her. So she does that, and Rees establishes the election race with a few large sets of campaign rallies. But that's not the main story. Because at the same time, it becomes apparent that the very story she’s been working on about smuggling has a personal connection, as her father Richard (Willem Dafoe) is in the middle of the weapons business. In a rambling bit of conversation that struggles to establish this and also their father-daughter dynamic, Elena takes a job for her father, wearing both her reporter and amateur smuggler caps.

Information is the crutch of this Joan Didion adaptation, and also its curse. So many scenes are about establishing background for a character or the strange arms deal that Elena gets in the middle of, and it makes the overall course of events all the more confusing. It gets worse when you add in the back-stabbings, secret identities, and shady dealings that take place, as Elena finds herself in Costa Rica learning more about how her father's deal directly implicates America. All the while Rees' choppy editing is going at full speed, bouncing between different lives, paralleling Alma’s own secret work, the story dragging us from one place to the next. Characters talk about the mystery of intent to Elena’s work, (maybe because they don’t see her do any reporting during all of this, either), and the question of “Why?” blares loudly in nearly every scene, not just Hathaway’s.

Hathaway is nonetheless all-in on this performance, and if the movie were more focused with Elena’s intent I suspect her sincere work would be better received. Instead she comes off as a character at the center of a parody about a hard-working, fearless journalist, who has a magic intuition when it comes to making the right bold move, and later can hold her own against menacing weapons dealers like Edi Gathegi’s Jones. In reoccurring quieter moments, Hathaway has an emotional core of being a detached mother, and a survivor of breast cancer, but both are distinct character elements that are lost in the fray.

Her supporting actors do not fare much better, and watching “The Last Thing He Wanted” is a great example of seeing professionals on autopilot. Ben Affleck’s approach to playing CIA official Treat Morrison is to speak lowly and with a glum face; Willem Dafoe progressively amps up the mental state of his dying character Richard, but it plays like stock work. And then there’s Perez and Gathegi, who are more story devices to push it along.

Much of Rees' film (co-written with Marco Villalobos) feels like a rough draft, and its dialogue is especially a problem in whatever goal the film has to be taken seriously. Cryptic conversations between stuffy government men in ties (including Affleck’s Morrison) feel especially dry, and become an over-labored point to show how Elena is a threat to crooked parts of the government. And there are numerous humdingers from the script that aim to have extra grit, and instead backfire. The best might be, as delivered ominously: "You ever see a monkey drive? Buckle up. It's gonna be bananas."

Watching “The Last Thing He Wanted” is a truly dissociative experience, in which eventually story, image, and emotion are entirely disconnected from each other. It simply plays in front of you, and then carries you all the way to Elena working as a daily housekeeper for an expatriate played by Toby Jones before the aforementioned disastrous coda. By that point, you’ll be convinced that “The Last Thing He Wanted” is a true Netflix Original Film paradox—not even a pause and rewind button at the ready will help it make much sense.

This review was filed from the 2020 Sundance Film Festival on January 30th. 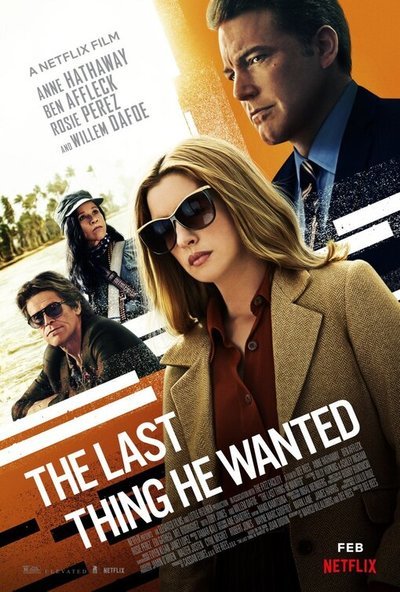