The Last Sharknado: It's About Time

As is the case with all great film sagas, the time has come for the “Sharknado” franchise to call it a day. Actually, that time came at approximately the 15-minute mark of “Sharknado 2: The Second One” (2014), but never mind. You will recall that the original “Sharknado,” which posited a bizarre meteorological phenomenon in which a massive tornado over the Pacific Ocean started dropping hundreds of killer sharks over Los Angeles in an orgy of poorly-rendered special effects to chomp on an array of vaguely familiar faces. It became a bit of a cult phenomenon when it premiered on the Syfy Channel back in the dog days of the summer of 2013, though I have a sneaky suspicion that more people heard about it than actually sat down to watch it.

Despite the fact that it was a one-joke premise at best, that didn’t keep the producers from repeating that same joke each successive summer, albeit with different locations (ranging from New York to Las Vegas to outer space), increasingly insane premises and a new array of guest stars making cameo appearances that felt like the middle ground between being a good sport and doing community service. However, with shark-based entertainments once again a regular fixture on the summer movie scene over the last few years (including “The Shallows” (2016), “47 Meters Down” (2017) and the current “The Meg” with next summer’s already announced “47 Meters Down: The Next Chapter” waiting in the wings) and with the real world outdoing the films in terms of sheer insanity on a daily basis, those responsible have at long last decided to call it a day with “The Last Sharknado: It’s About Time,” a film in which all the wit and ingenuity on hand appears to have been squandered on coming up with the title.

On my review copy of the movie, I was admonished by the film's producers to not give away any potential spoilers. This is one of the only two occasions during the film when I found myself genuinely laughing: what could possibly be hidden within the likes of the sixth “Sharknado” film? However, in the interest of fairness, I will try to be as vague as possible, which should prove to be surprisingly easy. As this one opens, longtime Sharknado battler Fin Shepard (Ian Ziering) has been sent back to the prehistoric age by his time traveler son (don’t ask) for the purpose of stopping the first sharknado and to bring some chintzy-looking dinosaurs into the mix. Aiding him in this quest is his long-suffering wife April (Tara Reid), old pal Bryan (Judah Friedlander) and fellow sharknado buster Nova (Cassandra Scerbo). (Of course, these characters all died in previous installments, but there's a semi-good explanation for that.) Anyway, things don’t go quite as planned and our motley band of heroes find themselves leaping from one shaky-looking historical era to the next in an effort to stop the sharknadoes of past and present.

Watching “The Last Sharknado” is like attending a noisy party and being cornered by an aggressively annoying drunk who insists on telling you the same joke over and over. The original “Sharknado” was demonstrably stupid, of course, but it possessed two of the key elements that any self-respecting exploitation film needs in order to succeed—a cheerfully outrageous premise and a certain sense of humor regarding its own overt tackiness. However, there is a fine line between stupid and clever, as a slightly better film once put it, and the “Sharknado” series crossed that particular Rubicon long ago. Whatever appeal that the sight of shabby-looking CGI sharks flying through the air and chomping on people has been long exhausted—even the creatures look kind of bored this time around, though not quite as much as series stars Ziering and Reid. The time-travel conceit adds up to little more than a series of anachronistic jokes that would not have passed muster on a lesser episode of “Mr. Peabody & Sherman” and production values that suggest an especially tack theme park on its last legs. The screenplay is little more than a collection of uninspired in-jokes and references to other and infinitely better movies, ranging from obvious targets like “Back to the Future” to slightly more arcane choices—one key plot development on display seems to be an extended shout-out to, of all things, “A.I. Artificial Intelligence.” As for the inevitable parade of cameos, even that turns out to be fairly uninspired this time around—while I won’t spoil any of them, it does appear as though most of the players were recruited straight out of a support group for survivors of “The Celebrity Apprentice.”

The problem with “The Last Sharknado: It’s About Time” is not that it is stupid. Hell, “The Meg” is about as stupid as a movie can get without containing Dinesh D’Souza’s name in the credits, but it at least had the good taste to continue to make an effort to entertain viewers while at the same time embracing its inherent silliness. No, the problem is that it commits the worst sin that any self-respecting exploitation film can make—it is profoundly and paralyzingly boring. Aside from the spoiler warning I mentioned earlier, there is only one joke in the film that actually works—a semi-inspired visual pun involving the very first appearance of Tara Reid’s character—and even that gets ruined just a few seconds later when they repeat the punchline a few times to make sure everyone gets it. By the end, even the most dedicated fans of the franchise—I have to assume that such people are still out there—are likely to come away this one feeling more exhausted than entertained. No one is going to be broken up over the notion of no future “Sharknado” films on the horizon. 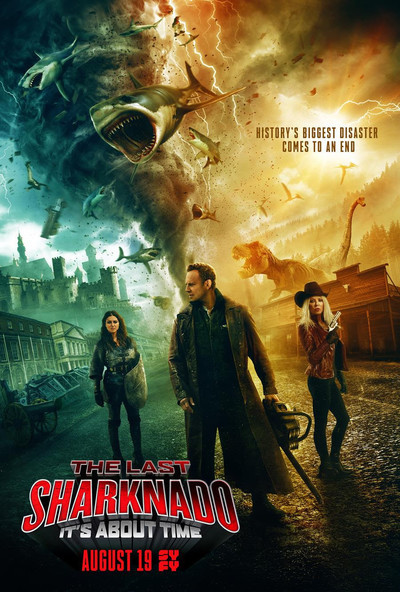 Vivica A. Fox as Skye

Raine Michaels as Girl in Bikini