The Land of Steady Habits

A character drama that chronicles a few days around the holidays for a few broken men, young and old, Nicole Holofcener’s “The Land of Steady Habits,” premiering at TIFF tonight and on the Netflix series on September 14th, reminded me of Ang Lee’s masterful “The Ice Storm.” All of the pieces here of suburban angst don’t quite come together as poignantly as in that ‘90s classic, but the setting and tone have that similar echo of what happens when ego-driven parents allow their stupid behavior to poison the environment in which they raise their children. Despite a few very funny beats, and a charming performance from the great Ben Mendelsohn, there’s an air of tragedy throughout “Steady Habits,” as if everyone is one bottle of wine away from doing or saying something they will regret forever. In other words, it’s an insightful portrait of middle-age in the ‘10s.

Mendelsohn plays Anders Hill, a fiftysomething who has decided to basically shed all of the habits of his predictable life. He’s retired early from a job in finance that he now seems to loathe in retrospect; he’s divorced his wife Helene (Edie Falco); he spends his days trying to find things at stores like Bed, Bath, & Beyond to put on the shelf at his new bachelor townhouse. Meanwhile, Helene has moved on to a new boyfriend (Bill Camp), who lives in his old house with his twentysomething son Preston (Thomas Mann), fresh out of rehab and looking for focus in his life.

Anders is learning something tragically true, something he explains to his friend Larry (Josh Pais)—we’re all replaceable. His home has a new patriarchal figure and the world of finance keeps going. Anders’ quest for the meaning of life reveals that, well, it goes on without him. Like so many literary and cinematic heroes, Anders doesn’t take this revelation too well, but Holofcener and Mendelsohn are delicate enough to keep him likable. He’s not a buffoon as much as he is a man who can’t find his identity or purpose any more. No job, no family, no relationship with his son, and he can’t even get it up any more. So he overcompensates in strange ways, such as the elaborate Christmas display outside his townhouse—something a bit strange for a single man.

He definitely overcompensates in his unexpected relationship with Charlie (Charlie Tahan), the son of family friends Mitchell (Michael Gaston) and Sophie (Elizabeth Marvel). Like Preston, Charlie has struggled with growing up, but he wants to hang out with Anders in ways that Anders’ son never does, and so the lost older man takes to the relationship, not realizing that Charlie could still use a father more than a friend.

Likely due to the nature of its source material, “The Land of Steady Habits” has an undeniably episodic structure—I haven’t even mentioned the relationship with Connie Britton’s character that starts in a strip club bathroom of all places—but Holofcener makes it work via her incredibly strong gift with character and performance. As she did with Emily Mortimer (“Lovely & Amazing”), Catherine Keener (“Please Give”), and James Gandolfini (“Enough Said”), Holofcener displays her remarkable skill at drawing the best from her performers. Mendelsohn’s work here is some of the most finely balanced of his career, allowing that sly, devilish side just enough time to make Anders interesting without turning him into an asshole. This character could have easily been a sad sack jerk—God knows we’ve seen enough stereotypical stories of white male mid-life crises in cinema history—but Mendelsohn believably grounds the character’s mistakes in something uncertain more than unlikable. Both young performers—Mann and Tahan—do excellent work as well.

The final act of “The Land of Steady Habits” takes a turn I won’t spoil but that alters the tone of the film in ways that won’t work for some. The plot's demands force a few scenes that don’t feel completely genuine, especially compared to the rest of the film. What I responded to most in “The Land of Steady Habits” were the little beats—the character choices made by the director and performer in a specific moment—and when the film is forced to be more plot-centric, it actually gets less intriguing. It’s the atmosphere of life that Holofcener gets so right that matters way more than the specifics of what happens in “The Land of the Steady Habits.” I guess it’s always more interesting to watch characters go about their lives as the storm clouds roll in than it is to watch the ice fall.

This review was filed from the Toronto International Film Festival. 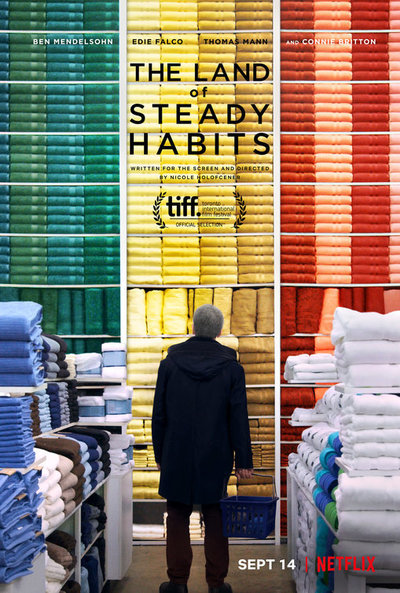