For reasons that I am at a loss to explain, I seem to have become this website's go-to guy when it comes to dealing with films based around the goofiest possible permutations of what the MPAA, in their classic justification for the PG-13 rating bestowed upon “Twister” (1996), once described as “an intense depiction of very bad weather.” In the last couple of years, I have found myself grappling with no fewer than three chapters in the apparently endless “Sharknado” saga and the equally deathless “Geostorm,” films offering up the chance to watch actors trying to keep a straight face while pretending to be startled by the cheesy-looking CGI effects added in later. The only reason that I bring up my bona fides in this particular area is so that when I tell you that “The Hurricane Heist” is one of the dumbest variations of the weather-based action thriller subgenre that I have ever seen, you can be rest assured that I know what I am talking about.

The film opens with a prologue set in 1992 that features two young Alabama brothers, Will and Breeze, attempting to escape the destructive force of Hurricane Andrew with their father. Suffice it to say, it does not go well and Dad gets crushed by a water tower while his sons look on in horror—just so you know that the younger Will is suitably traumatized, he at one point sees the clouds actually morph into a giant screaming skull. A quarter-century later, Will (Toby Kebbell) is a brilliant government meteorologist who is nevertheless terrified by bad weather while Breeze (Ryan Kwanten) has remained in their hometown of Gulfport to run Dad’s towing and repair ship while spending his days in a drunken stupor. Alas, another superstorm, dubbed Tammy, is bearing down on Gulfport. And while his superiors pooh-pooh his dire warnings, Will rides back into Gulfport to get Breeze out in time before Tammy hits landfall and sets the cottonwoods screaming.

Meanwhile, a plot is underfoot by a group of miscreants to steal over $600 million in old currency slated for destruction from a U.S. Treasury facility. Now you and I might think that the imminent arrival of the killstorm of the millennium might cause even the most intricately planned heist to be scrubbed with no sense of shame. However, not only does this outfit press on with their plans, it turns out that the ringleader, disgruntled Treasury employee Perkins (Ralph Ineson), has actually devised the entire caper around just such an event. Sadly, he makes the mistake of spending too much time focusing on the big picture and the one person who can possibly foil his plan, fellow agent Casey (Maggie Grace), slips through his hands with the piece of critical information that he needs to make off with the money. Eventually, Maggie and Will come together and try to thwart Perkins’ plans before the awesome force of Tammy can kill them all.

Granted, it is unlikely that anyone going into “The Hurricane Heist” hoping for a sweeping crime drama on the level of something like “Heat.” But even by the less rigorous critical standards one might logically apply to this film, it fails pitifully in its efforts to reach them. For starters, the whole conceit of the film is so absolutely absurd that even those with a taste for action nonsense will find it to be far too silly to get behind. Hell, “Hard Rain,” one of the many films that it flagrantly borrows from, is one of the dumbest action extravaganzas ever made but even it comes across as plausible in comparison to this—both films involve heists that take place during terrible meteorological conditions but at least the criminals in that film weren’t counting on the bad weather. Making matters worse is that screenwriters Scott Windhauser and Jeff Dixon were apparently so proud of the concept that they never quite got around to realizing that having an entire film take place during a hurricane would wreak havoc with the visual storytelling—there are plenty of gunfights and car chases on display but as they are all filtered through the torrential rain and wind strong enough to move one of Morrie’s wigs, it is almost impossible to figure out what is going on up on the screen amid all the clutter. (To be fair, it does inspire one deathless line of dialogue from one of the bad guys: “All we needed was one little hurricane and you screwed it up!”) Then again, the storytelling is just as clumsy in the few moments when the characters get out of the rain—one transition is handled so badly that I was convinced for a few minutes that an entire chunk of the film had been accidentally dumped along the way.

“The Hurricane Heist” was directed by Rob Cohen, a filmmaker who tends to specialize in insane action spectacles, some of them entertaining (such as the first films in the “Fast and the Furious” and “XXX” franchise), some of them less so (“Daylight” and “Stealth” among them) and at least one (the talking dragon epic “Dragonheart”) that has defeated me every time I have attempted to watch it all the way through. While I will concede that he is probably the perfect filmmaker for this particular material, his work here is nevertheless pretty pitiful throughout. The whole thing has the chintzy look of a direct-to-video “Die Hard” knockoff that somehow managed to get theatrical play and even his “A Small Circle of Friends” had better staging than the action on display here. His direction of the performances is just as listless and uninspired as everything else. I have to say, I never dreamed that Cohen would ever make a film dumber and shabbier than his previous effort, the Jennifer Lopez sexploitation effort “The Boy Next Door,” let alone accomplish that goal with his very next film.

In this review, I have cited a number of earlier films that “The Hurricane Heist” baldly and badly rips off. One additional title that came to my mind when I was watching it was Brian De Palma’s underrated 1998 conspiracy thriller “Snake Eyes.” That film, you may recall, was set inside an Atlantic City casino that was being buffeted by an approaching hurricane. Originally, De Palma filmed a finale in which the hurricane finally hit and wreaked havoc but he famously dumped that footage and shot a new ending when he determined that it was just not working. If only Cohen had taken his lead and cut out all the hurricane-related material from his film as well. Granted, the end result of that would have been a film with a running time of about seven minutes but trust me, viewers of that hypothetical version would still be getting the better end of the deal than anyone sitting through “The Hurricane Heist” in its wretched entirety. 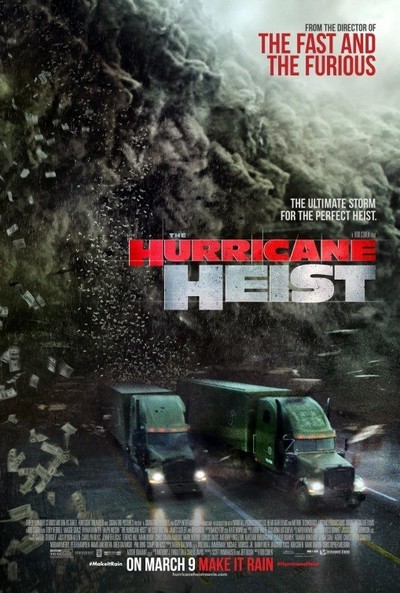 Toby Kebbell as Will