If you liked “Frozen” but wish it had been angrier, “The Huntsman: Winter’s War” is for you.

It’s a tale of two royal sisters, one of whom discovers in a fit of rage that she has the ability to shoot ice from her fingertips—so she exiles herself to a faraway land in the mountains, where she creates her own kingdom and builds her own army. She even wears decadent gowns in various shades of pale blue and pulls her hair back in elaborate braids.

Seriously. This is what “Winter’s War” is about.

But before you can say “let it go,” this sorta-prequel, sorta-sequel, sorta-something-in-between to 2012’s “Snow White and the Huntsman” trots out several other subplots, all of which combine to make a messy (and less-than-magical) narrative.

The original film worked as a dark take on the familiar “Snow White” fable, with breathtakingly beautiful, brutal imagery and a richly villainous turn from Charlize Theron as the wicked queen. It was thrilling yet empty, but at least it had focus and kept you engaged. This time, first-time feature director Cedric Nicolas-Troyan (taking over for Rupert Sanders) has trouble juggling all the scattered storylines in Evan Spiliotopoulos and Craig Mazin’s script.

Is “Winter’s War” about a rivalry between two sisters, the dastardly Ravenna (Theron) and the devastated Freya (Emily Blunt)? Is it about the forbidden love between Freya’s two top soldiers, huntsman Eric (Chris Hemsworth) and hell-raiser Sara (Jessica Chastain)? Is it about Snow White, who’s mentioned with great reverence but is seen only a couple times in the briefest, vaguest of glimpses? (Unlike Theron and Hemsworth, Kristen Stewart does not return for part two, despite having been the title character in part one. Even my six-year-old kid thought that seemed weird.) Or is it about the squabbling, digitally-rendered dwarfs (Nick Frost and Rob Brydon) who serve as comic relief?

The only cohesive force is a pervasive sense of self-serious dreariness. With the exception of a brief visit to a forest full of fairy sprites and vibrantly-hued creatures, “Winter’s War” is as monotonously somber as the title would suggest.

It begins with infanticide and moves on to the kidnapping and training of child soldiers (they’re not just for young adult adaptations anymore!) to serve as the miserable Freya’s army as she seeks revenge from high atop the snow-covered hills. Freya has made it clear that love is a no-no, but her two fiercest weapons, Eric and Sara, have dared to fall for each other—and so she destroys their chances of happiness, too. Motivations aren’t terribly complicated here, but the omnipresent voiceover from Liam Neeson spells everything out for us nonetheless.

Seven years later (and timeline-wise, after the events of “Snow White and the Huntsman,” for those of you playing at home), Ravenna may or may not be dead. But the mirror that emboldened her has gone missing, and everyone’s looking for it, because it’s powerful. Or something. It is the shiny, golden McGuffin, and it can either bring people together or tear them apart.

As for its effect on Hemsworth and Chastain’s characters, it could go either way—but then again, it’s tough to care. Individually appealing as they are, these two actors have zero chemistry with each other. Their love scenes (including one which just happens to take place in the only hot tub in this entire frozen land) are actively uncomfortable to watch. Their flirty banter isn’t much better, and only in part because they’re speaking in inconsistent Scottish accents. Hemsworth is borderline unintelligible much of the time, and not in an intentionally funny, Brad-Pitt-in-“Snatch” kind of way; Chastain’s brogue flits in and out. And luminous and versatile as Chastain is, playing the warrior princess isn’t her strong suit.

The other major stars here—Theron and Blunt—bring a sporadically enjoyable campiness to the proceedings as dueling queens. Blunt can be quite unnerving as the shattered Freya, and she does her best to infuse depth to the character that doesn’t exist on the page. Meanwhile, Theron is vamping it up to such an extent, it’s as if she’s in an entirely different movie—one with some life to it that you’d actually want to see.

Nicolas-Troyan has a visual effects background (including an Oscar nomination for his work on “Snow White and the Huntsman”) so the major set pieces can be striking at times, especially the moments involving the mirror itself in all its hypnotic allure. But much of the action sadly remains dull and emotionally detached—one-note, repetitive brawls with axes/sticks/swords/etc.

The costumes are mind-bogglingly beautiful, though—the work of the great Colleen Atwood, 11-time Oscar nominee and three-time winner (for “Chicago,” “Memoirs of a Geisha” and “Alice in Wonderland”) who also designed the clothes for the original “Huntsman.” The luxuriously appointed gowns range from gold-and-black, bird-fetish chic for the statuesque Theron to crisp and crystalline grays and blues for Blunt—although it’s clear that the cold never bothered her anyway. 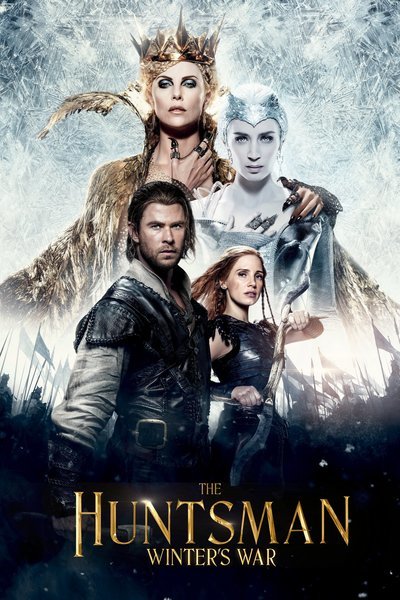 Chris Hemsworth as The Huntsman