“The Hater” is a woeful attempt at political satire that's as subtle as an anvil dropped on your foot and inspires just about the same number of laughs. Not only does it fail to compare to such classic examples of the form as “Duck Soup,” “Bulworth,” or “Election,” it comes up short in comparison to such excruciating duds as “Don’t Look Up” and “Irresistible,” the Jon Stewart-directed vehicle that proved to be so utterly forgettable that yes, I had to look it up online in order to recall the title.

Dorothy (Joey Ally, who also wrote and directed) is a passionate young liberal speechwriter for a California Senate campaign whose career goes up in flames, literally, when she inadvertently torches an American flag during a protest. With no job or prospects on the horizon, she returns to the deeply conservative small Texas town where she grew up to stay with her estranged Fox News-watching grandfather (Bruce Dern) to lick her wounds. Shortly after arriving, she learns to her horror that Brent (Ian Harding), the childhood bully who always defeated her in class elections, is running for state representative, following in the footsteps of his senator father. Outraged, she hits upon the idea of exploiting a Texas election law loophole as a way of fighting the good fight and getting back at her former tormentor—she will run against him for the Republican nomination, win it, and then drop out of the race, all but securing victory for the otherwise doomed Democratic candidate (Melora Walters).

With the help of Greta (Meredith Hagner), a sweet-natured fellow classmate who she appoints as her campaign manager (and who is not in on the joke), Dorothy begins her campaign and begins to gain some traction when she inadvertently thwarts a convenience store robbery and becomes a local media darling thanks to the efforts of an ambitious news reporter (Ali Larter). With the support of a wealthy local gun merchant and a makeover courtesy of her requisite gay African-American best pal (D’Angelo Lacy), she begins rising in the polls with a campaign that is long on buzzwords and platitudes (such as couching her environmental beliefs in terms of going back to the Garden of Eden) and short on specifics. Along the way, she (surprise) learns that there's more to the people she had dismissed as rubes—even rebuilding her relationship with her grandfather—which begins to weigh heavier on her as Election Day approaches.

There's a germ of a good comedic idea here, but Ally doesn’t seem to have any idea of what to do with it. From a humor standpoint, the satire on display adopts a both-sides mentality which renders most of the material comedically toothless. From an ideological standpoint, it's even more of a mess that refuses to take a stand on anything other than an aren’t-we-all-the-same-deep-down mentality, which might have played once upon a time but which comes across here as deeply tame. Weirdly, for a film that wants to come across as political, it contains precious little political material to speak of—we barely see either her rival or the Democratic candidate for most of the running time. When they do turn up, Ally’s attempts to show that you can’t judge a person by the labels attached to them are especially tone-deaf.

In a film filled with bad things, the worst of them is a brief subplot involving a visit to a Planned Parenthood clinic that becomes a big issue in the heat of the campaign. Obviously, abortion is a charged topic, especially in regards to Texas these days, and the subject offers a jolt here as most films would avoid it at all costs. Unfortunately, the movie immediately chickens out in a way that will infuriate most viewers, dropping the arc from the narrative. The result is a pointless plot thread feels like the sole remaining vestige of a stronger initial idea, and probably should have been ditched entirely.

Aside from a couple of good moments from Hagner and the always reliable Dern, “The Hater” is a mess that's bereft of laughs, ideologically suspect, and tedious from start to finish. If it does bring people from both sides of the political spectrum together, it will only be in a shared sense of utter boredom.

Playing in select theaters and available on VOD. 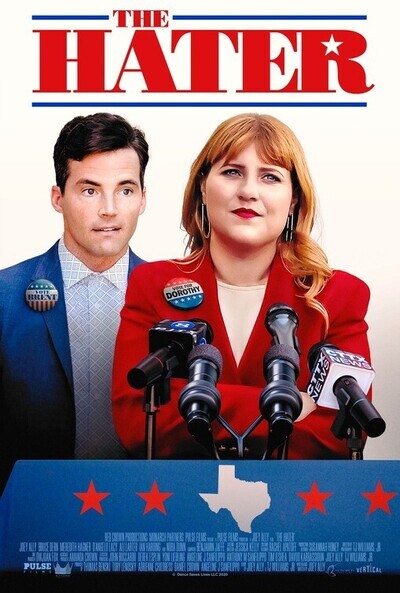