Like a series of Monet paintings come to life, the historical drama “The Guardians” luxuriates in lush, widescreen images of the French countryside. World War I is raging elsewhere, but this segment of the country remains unspoiled and fertile—thanks to the hard work of the women who’ve been left behind to manage the family farm while their husbands, brothers and sons are off fighting, and sometimes not coming back.

Director and co-writer Xavier Beauvois takes his time introducing us to this place and these people. His pace is unhurried, allowing us to breathe in and appreciate the beauty of the painterly light as it bathes the trees, wheat fields and hillsides in a colorful glow (the work of cinematographer Caroline Champetier, who also shot “Holy Motors” and Beauvois’ “Of Gods and Men”). We catch a glimpse of the horrors of war at the very beginning as he pans silently across a battlefield, with lifeless bodies strewn about in the mist. But Beauvois is far more interested in how the loved ones of those men struggle to continue living. He has made an intimate epic, as contradictory as that sounds.

The director, who currently has a juicy supporting role as Juliette Binoche’s arrogant, married lover in “Let the Sunshine In,” is far more respectful and appreciative here of the many crucial roles women play. And in Nathalie Baye, Laura Smet and newcomer Iris Bry, he has three very different actresses through whom to explore the film’s themes. (Beauvois wrote the script with Marie-Julie Maille and Frederique Moreau, based on Ernest Perochon’s 1924 novel “Les Guardiennes.”)

Part of the allure of “The Guardians” comes from the casting: The radiant, real-life mother and daughter Baye and Smet play mother and daughter Hortense and Solange. The year is 1915, and both of Hortense’s sons have been away at war, as has Solange’s husband. All three men come and go over the course of the film, but the ladies require more consistent help year-round, with dreams of modernizing their operation looming wistfully in the distance. (This may be a spoiler, but you’ll never see another movie featuring not one but two scenes of characters reacting joyfully to the arrival of a tractor.)

They get some much-needed assistance when the bank in the nearby village sends them 20-year-old farm laborer Francine (Bry) instead of the loan they’d sought to buy new equipment. With her blazing red hair and milky, fair skin against a backdrop of the farmhouse’s bright blue door, Francine stands out from the moment she arrives, and she’ll eventually serve as the catalyst that shakes things up for the whole family. (You could think of “The Guardians” as a really sad, really slow version of “Tully.”)

Francine takes her cues from the steely Hortense: milking the cows in the morning, harvesting wheat in the afternoon and casting seeds about at dusk. When winter comes, she splits logs in the blindingly sunlit snow. Beauvois lingers over the minutiae of these moments, allowing us to focus on the arduousness and monotony of the tasks, with the sounds of the work creating a rhythm. If you’re interested in movies about process, or people doing their jobs well, you’ll be enthralled.

When the men do return on leave for brief periods, they don’t speak of the violence they’ve endured, but they’re clearly changed. “The Germans are people like us,” Solange’s husband, Clovis (Olivier Rabourdin), informs his family over dinner—teachers and farmers like them.

But the more dramatic shift in the film occurs with the return of Hortense’s hunky, flirty son Georges (Cyril Descours), who takes an instant interest in Francine. Quiet but confident, she initially won’t succumb to his advances, even though he’s using every trick in the book to seduce her: “I’m leaving tomorrow. I may not come back.”

A romance eventually blossoms between Francine and Georges, though, as the years pass. (The title card for 1917 is especially striking with its purple, misty sense of melancholy.) And the melodrama that ultimately accompanies it becomes the film’s downfall. While it’s fascinating to watch Francine as she ages and claims her feminine strength, the flimsy misunderstandings and hurt feelings that come to characterize her—and her relationship with Georges—grow tedious. Along those lines, a slow-motion nightmare of war violence that plagues Georges in his sleep feels out of place compared to the understated calm that marks the rest of the film.

Still, “The Guardians” maintains an underlying focus on humanity, in all its complications during a time of great distress. You think people are deeply decent but then they completely botch the handling of something important. Everyone is damaged and the rules no longer apply. That messiness is interesting.

And Bry has a consistently beguiling screen presence. With expressive looks reminiscent of a silent film star, she has a clarity and a directness about her that are hugely appealing. You know her character will find her way in the world, even when the film loses its own. 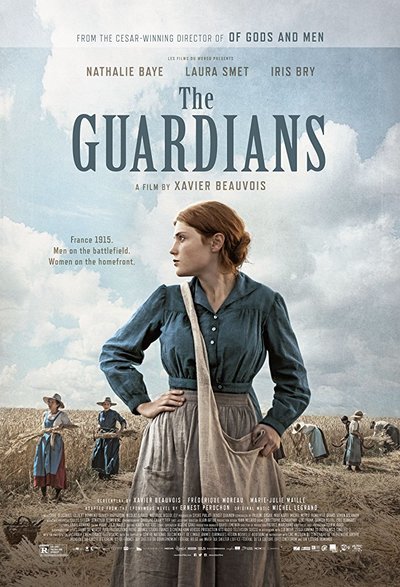 Rated R for some violence and sexuality.