Let the Sunshine In

The movie begins with a startling, intimate sex scene. A hefty middle-aged man is making love with an attractive middle-aged woman. He is avidly concerned with bringing her to orgasm, each one worries that the other is worried that the other is taking too long—“I feel good. I’m good,” insists one of them— the sex ends in resignation. What’s startling about the scene is not its explicitness, which is not inordinate. It’s the way the characters are framed, in medium closeup, in compositions that emphasis the space between their faces as much if not more than their faces. (One is reminded of Elie Faure’s writing on Velasquez, quoted by Jean-Paul Belmondo in Jean-Luc Godard’s “Pierrot Le Fou.”)

This is the touch of a cinematic master. Claire Denis is the writer and director of this film, and she surely is this thing, as is her collaborator, the cinematographer Agnés Godard. “Let The Sunshine In” (the title is a horrifically bad translation/transposition of a pertinent phrase that is uttered in the last scene of the film) soon puts these characters into clothes and in conversation. The woman is Isabelle, a successful visual artist and divorced mom, played by the always astonishing Juliette Binoche. The man is Vincent, a married banker who’s got his stubby piggish fingers in the art world, and enjoys baiting Isabelle with who-slept-with-who gossip about gallery owners and former lovers. Vincent, incarnated with spectacular relish by Xavier Beauvois (the actor and filmmaker best known here for directing 2010’s “Of Gods And Men”) is a real piece of work, arrogant without end, a grotesquely pedantic and condescending whiskey snob (they’re worse than wine snobs if you can imagine such a thing) who in one scene requests a bartender bring him “gluten-free olives.” He is the first in a series of lovers whom Isabelle contends with in this.

Like Muddy Waters, Isabelle can’t be satisfied. The viewer is perhaps meant to drop their jaw at seeing this attractive woman stuck on a contained boor such as Vincent, but her reason, which she lets on late in the movie, makes perfect if perverse sense. After establishing some distance from him, she has a frustrating drinks-and-dinner session with an unnamed stage actor with whom she wishes to collaborate on an unnamed project. Even after he admits his alcoholism to her, she engineers an awkward seduction; their post-coital relationship feels more like boxers in a ring refusing to approach each other rather than a romantic or sexual affinity.

The film continues to chronicle Isabelle’s struggles. This isn’t a story of a smart woman making bad decisions; Denis’ mind isn’t as simplistic as that. The director has treated a pretty wide variety of topics over the course of her long and wonderful career. Female desire, as it happens, is not one she’s looked into often. 2002’s “Friday Night” was the last time she took it on quite so directly. In that film, a young woman on the verge of entering a permanent union found herself in circumstances that allowed her a brief escape that could also have been an epiphany. In this film, Isabelle, as beautiful and smart as she is, feels herself constricted by forces she can’t even confront. Is it the most appropriate thing for her, at her age, to live, as she puts it, a “life without desire?”

Clearly no. But the film does confront the fact that particularly for women, pursuing desire in middle age is a fraught path. To add a twist to this demonstration, Denis breaks it off late in the movie, and jumps briefly into someone else’s storyline, someone who had been a stranger up to this point. Then the filmmaker wraps it up in a final shot that’s both cerebral, whimsical and wry in its wisdom. The film’s confidence comes in part from the acceptance of the things that can’t be known. 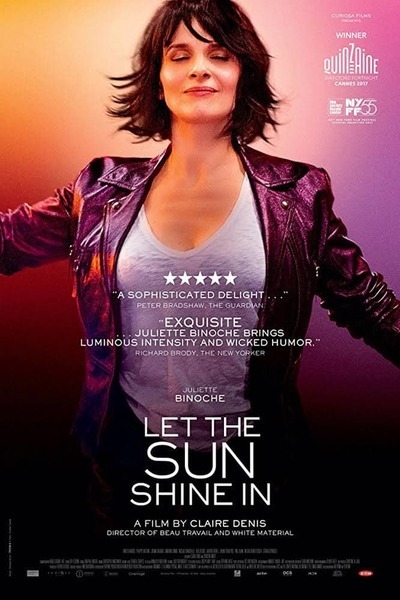