Peter Farrelly’s glib and superficial “The Greatest Beer Run Ever” has the nerve to give several of its characters speeches about how war is nothing like what we see on television or in movies, embedded in a movie that’s about as a realistic about combat, trauma, and death as a high school play. It’s not just a bad movie—those are common enough to be dismissible—but a movie that I found grossly condescending and manipulative, a dramedy that’s so deeply unconcerned with its actual true story other than how it can be crafted to emotionally impact an audience. A lot of critics came down hard on “Green Book,” an admittedly inferior Best Picture winner, and I started to wonder if this film wasn’t made just so people would be nicer to Farrelly’s last movie by comparison.

Based on the book by Joanna Molloy and John “Chickie” Donohue, “The Greatest Beer Run Ever” tells the latter’s true story of a misguided delivery to an active international conflict, where he learned, "Yes, Vietnam was bad." We meet Chickie (a miscast Zac Efron) in New York City in 1967, aimless enough that his dad gives him a hard time for sleeping in and lacking motivation. He spends most of his time at the bar with his buddies, even as they watch friends go off to Vietnam and never come home again. When one of his closest allies goes M.I.A., Chickie has a crazy idea one drunken evening—what if he brought all of his buddies a beer? Just to show them that NYC still loves them? Egged on by fellow barmates, including a proprietor played by a speechifying Bill Murray, Chickie decides to get on a cargo ship headed to 'Nam to find the guys. All he has to do is spend two months on a ship, find people he knows in a large country in the middle of a war, give them some encouraging suds, and find his way home again. No problem, right?

Chickie fights with his sister (Ruby Ashbourne Serkis) over the at-home response to the war, arguing that protests diminish the sacrifice of the men on the ground. And he says directly to press members he meets in Vietnam, including one played by Russell Crowe named Arthur Coates, that they’re only reporting on the bad stuff from the war. He’s there to bring some light to a dark situation, and to remind the boys that they’re supported. Of course, anyone who’s seen a movie or read a book understands that Chickie is going to learn a harsh lesson about the truth of actual war while he’s on his beer run, and here’s where Farrelly’s limited range as a filmmaker becomes a significant problem.

Someone says about Chickie, “Every once in a while, you run into a guy who’s too dumb to get killed.” It’s meant to be a humorous line, but it reveals the foundational flaw of “The Greatest Beer Run Ever” in that Chickie is written and played poorly. He needs to be almost a Hal Ashby character, someone pushed through the world in a way that reflects the kind of ignorance that often keeps people alive, but he’s sketched instead as a working-class hero, a heartfelt guy who’s more courageous than stupid. That's a tough sell. There’s a vastly superior version of this film that’s more comfortable mocking Chickie’s naïveté instead of using it for heartfelt speeches about dying friends.

The script here by Farrelly, Brian Currie, and Pete Jones seems almost afraid to judge Chickie, which gives the movie no redemption arc at all. Sure, it goes through the motions of Chickie discovering that war really is Hell, but it’s all so superficially rendered that it never feels like an actual journey. And one can’t shake how Chickie is kind of an entitled jerk. The film wants to present him as a wide-eyed optimist who discovers the truth, but he’s constantly putting people in harm’s way in a manner that makes one want to punch him in the face instead of root for him. He’s just a wildly misjudged character on every level. And don’t get me started on how the film uses a Vietnamese local who befriends Chickie only to be dispatched in a way to push the audience’s buttons. The actual country and people who lived, fought, and died there are only interesting in how they shape the growth of a dumb kid from NYC. Ugh.

The only one who gets out of this cinematic conflict unscathed is Crowe, who feels like he walked in from the set of a much more interesting movie about journalism. He conveys a believable curiosity in Chickie, someone who he tries to teach and protect, but Farrelly’s film doesn’t give him nearly enough screen time to drag the movie into something more believable. He’s too content with half-assed jokes and war drama, never finding nearly enough of either to justify the interminable 126-minute runtime of this film, one that legitimately felt longer than anything I’ve seen this year. They should have called it “The Longest Beer Run Ever,” but that would require something this movie is offensively uninterested in delivering: honesty. 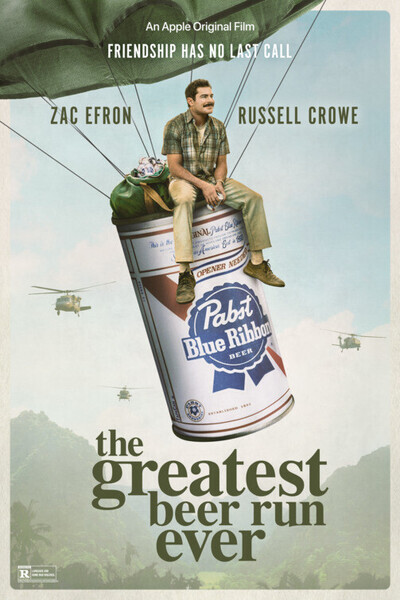 Rated R for language and some war violence.

Bill Murray as The Colonel

Will Ropp as Kevin McLoone

Will Hochman as Tommy Minogue