Ryan Gosling may not have played a superhero (yet) but he gets closer than ever before in the mega-budget Netflix production “The Gray Man,” the streaming service's summer blockbuster from the directors of “Avengers: Endgame,” Anthony and Joe Russo. It’s understandable why Gosling would sign up and Netflix would open not just their wallet but an entire bank vault for the Russos to adapt the book by Mark Greaney, with an eye to starting a new mega-franchise of their own. However, it’s becoming clearer and clearer that Netflix has too little creative oversight over projects like these, just letting creators run off with their money and not really caring about what they deliver. After all, it fits the algorithm, right? People will watch “The Gray Man” by the millions. They just won’t be able to name a memorable thing about it a few days later. If this is the start of a franchise, and it almost certainly is, let’s hope “The Gray Man” finds a little more definition in future installments.

The star of “La La Land” and “Drive” plays a spy named Sierra Six (“007 was taken”), who was recruited out of prison by a handler named Donald Fitzroy (Billy Bob Thornton). After that very brief set-up, “The Gray Man” hits the ground running with a mission gone very awry when Six is tasked by a new boss named Denny Carmichael (Regé-Jean Page) with taking out a target that turns out to be a fellow secret agent. The dying man tells Six that Denny is a bad guy before handing him the intel to prove it. Immediately, our stoic hero is on the run, before he’s really had any time to develop a personality as a movie character. That kind of blank protagonist is fine for taut, precise action films like those in the “John Wick” franchise, but this isn’t nearly that tight of a production. This movie needed an Ethan Hunt, someone defined by more than just the clichés that he won’t shoot a kid and he has a dark past. (Seriously, it would be tough to name five characteristics of this hero that we’re supposed to follow for two hours. Never a good sign.)

As Six goes on the run, Carmichael calls in Lloyd Hansen (Chris Evans), a former CIA black ops mercenary who now works in the private sector where there are even fewer rules about things like torture and dumb mustaches. Hansen will do whatever it takes to get Six, including kidnapping Fitzroy’s daughter Claire (Julia Butters) to get his attention. Of course, Six has a connection with Claire having watched over her a few years ago. He’s the spy who wants kids to live, which separates him from a sociopath like Hansen. Meanwhile, another spy named Dani Miranda (Ana de Armas) joins Six on his quest for freedom. and she is given even less character definition than her male counterparts, believe it or not.

And that’s really it for two hours. Good guy, bad guy, woman in the middle, kid in jeopardy, things go boom. Some of the action sequences, especially an insane one in a town square, can be pretty effective, but most of the film is shot at such a bizarrely low light that it dulls even the incredible screen presence of the undeniably charismatic Gosling, Evans, and de Armas. Seriously, whoever thought the right lighting for most of a globe-trotting action flick was the low light palette of “Ozark” deserves a cinematic jail sentence. “The Gray Man” should be joyously over-the-top if it wants to be a new Fast & Furious or Bourne franchise but with the exception of a wisecracking Evans, everything here feels so programmatically dull. It’s a silly piece of popcorn entertainment that too often forgets that this kind of venture needs to be fun.

Part of the problem is that Evans is never set up as an interesting threat. In fact, he seems kind of horrible at his job—a colleague says that an asset removal gone horribly, a headline-making wrong, will be taught in schools as to what not to do. This isn’t a battle of wills so much as a good spy vs. a crazy spy. There’s something underdeveloped in the idea that Gosling is the old-fashioned spy and Evans is the brute force modern maniac whose strategy seems to just be to blow up as much as possible, but the script by Joe Russo, Christopher Markus, and Stephen McFeely keeps trying to sell us on Hansen being a terrifying genius and there’s really no evidence of the latter part.

Like so much original entertainment in the streaming world, “The Gray Man” seems scared to take an actual risk. There have been many pieces written about the algorithms and templates that feel like they’re driving creative decisions more than actual human beings. When will a company like Netflix throw $200 million at a movie and emerge with a “John Wick,” “Mission: Impossible,” “Mad Max: Fury Road,” or even a “Fast Five”? It might take an actual superhero for something like that to happen.

In theaters now and on Netflix Friday, July 22nd. 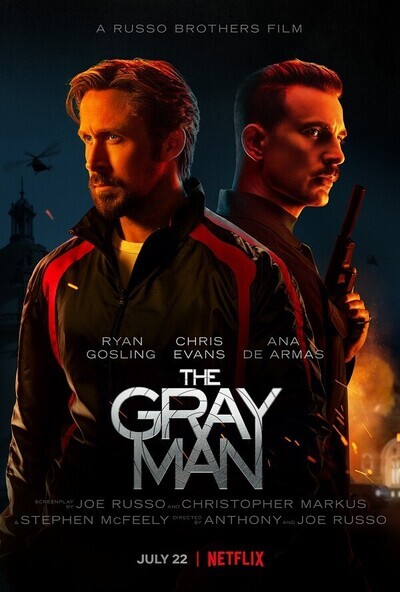