Wine doesn’t really count as drinking, Sigourney Weaver’s character insists in “The Good House.” She’s not really drinking alone, because the dogs are with her in the kitchen as she pours merlot from her secret stash into a coffee mug. And she’ll be extra careful this time, she promises, so she’s fine to drive into town after downing a few glasses.

These are among the many lies Weaver’s Hildy Good tells herself—and tells us in frequent, fourth wall-breaking confessions—to keep the reality of her alcoholism at bay. Based on the novel by Ann Leary, the romantic dramedy “The Good House” touches on some piercing and deeply relatable truths about drinking, and about women’s drinking in particular: that it gives us swagger, that it helps us hang with the big boys, that it lets us present the best version of ourselves to the world. Even when the film falters, Weaver consistently finds room to explore the many fascinating flaws revealed by her character’s addiction. Her performance, and her effortless connection with frequent co-star Kevin Kline, remain engaging even after the direction from Maya Forbes and Wally Wolodarsky grows unfocused.

Hildy’s narration is wry and wise, sometimes conspiratorial and increasingly contradictory, as she shows us around the charming (and fictional) New England town of Wendover. She’s been the queen bee realtor for decades in this insular hamlet, but all that’s changing as nouveau riche families barge in from nearby Boston. Hildy’s proud of the fact that her family’s been a fixture in Wendover for centuries—dating to the time of the Salem witches, one of whom is her ancestor. (Cue the on-the-nose use of “Season of the Witch,” among the movie’s many perky music choices.) Now divorced (since her husband left her for a man) and infrequently in touch with her grown daughters, Hildy is struggling to determine who she is. And although she’s freshly out of rehab—after an intervention that’s played for laughs in the script from the husband-and-wife directing duo and Thomas Bezucha—being sober is not part of her new identity.

Watching Hildy try to keep all the balls in the air is both a source of humor and tension, as the disparity between who she is and who she pretends to be steadily widens. She’s losing clients and dodging phone calls from the Range Rover dealership, asking for her lease payment. And in no time, she’s switching from wine to vodka to help her cope. That’s all human and true, and Weaver plays it with subtlety and great comic timing.

But the one source of stability in her life comes from Kline’s Frank Getchell, her high school flame and first love. He’s the town’s cantankerous contractor/handyman, and his disheveled appearance and down-to-Earth demeanor would never suggest he’s the richest guy around. Their hesitant fumblings toward rekindling their romance are amusing and sweet—the kind of relationship older audiences don’t get to see often enough in the movies anymore. After co-starring opposite each other in the ‘90s in “Dave” and “The Ice Storm” Weaver and Kline have a warm, easy comfort in each other’s company, as well as a prickly, teasing affection. It’s like pulling on a favorite, old cardigan you forgot you had.

So much works so well for so long in “The Good House” that it’s frustrating when the film casts its eye elsewhere and begins paying way too much attention to the town’s peripheral figures. Rob Delaney co-stars as the therapist whose office is upstairs from Hildy’s; he’s obviously going through some kind of personal and professional flux of his own. Morena Baccarin is a newcomer, the beautiful wife in a wealthy couple that’s just bought a giant waterfront estate, but everything in her life isn’t as perfect as it appears. Kathryn Erbe is the former protégé of Hildy’s who stole all her clients when she formed her own agency; there’s not much to her beyond icy glances and snobbery. And Beverly D’Angelo breezes in and out as Hildy’s childhood best friend and longtime drinking buddy.

None of these characters is nearly as richly drawn or interesting as Hildy and Frank, but increasingly, the story turns toward them and others. They feel like contrivances and plot devices, especially in some third-act melodrama that comes out of nowhere and whips the story up into an empty frenzy. It’s so wild, you’ll wonder what’s really happening and what she’s hallucinating. The film clearly seeks deep emotions from us that it never earns. If anything, you’re more likely to feel annoyed by all these distractions.

But there are worse ways to spend an afternoon than on a lobster boat in the shimmering sunshine with Sigourney Weaver and Kevin Kline. Dressed in a barn jacket and a knit Patriots hat, getting messy out on the water, Hildy finally appears to be where she belongs. And she doesn’t have a drink in her hand. 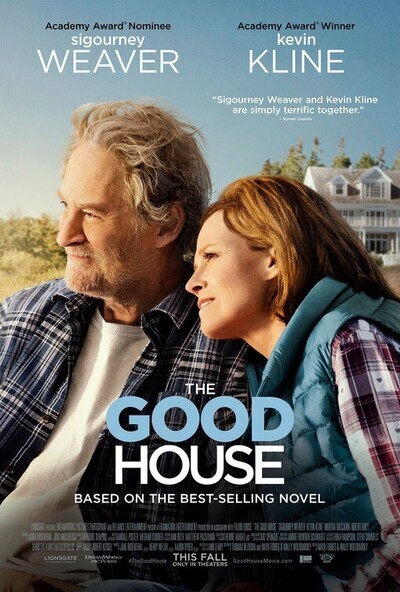