When it comes to satire, two basic approaches can be used—one can go big and broad, ensuring that everyone gets the joke, or one can do it with such subtlety that some not paying attention might mistakenly assume the work is endorsing the very things it's making fun of. Either one is perfectly valid and can yield enormous laughs when deployed properly. But when the two approaches are combined, the result can be a messy, unsatisfying clash of comedic tones that never create a cohesive whole.

That is the basic problem with “The Good Boss,” Fernando Leon de Aranoa’s attempt to skewer the corporate mindset that employees of a company are all one big family, although that means the higher-up "parents" get to sit back and ponder such concepts while the “children” do the work. The film as a whole is pretty broad in its humor and observations in ways that sometimes work and sometimes don’t. At the same time, there is a marvelous central performance from Javier Bardem that's as quiet and precise as the surrounding movie isn’t. I found myself too often wishing that it could have been delivered in a film that could offer it a better framing.

Bardem plays Julio Blanco, the top man at Basculas Blanco, a business dedicated to making industrial scales. When he speaks to his employees in an early scene, he stresses that he sees them as family. And at first glance, he does appear to be a benevolent fatherly figure who is willing to go out of his way to help his “children”—when the son of a longtime employee is arrested for beating up an immigrant in a park, Blanco arranges for the kid to work at the dress store run by his wife, Adela (Sonia Almarcha). However, we soon begin to notice that some of his favors do come with a catch and his interest in the outside lives of some of his employees is a bit overbearing. We also see, from the way that he deals with a pretty intern leaving the firm (with a piece of jewelry as a going-away trinket) that perhaps he favors some of his children in more particular ways than others.

The aforementioned talk with his workers is a rally-the-troops affair for Blanco, who has been shortlisted as one of the three finalists for an award described as “the Oscar of scales.” This may sound tacky to you (if still more prestigious than a Golden Globe) but Blanco is determined to win it at all costs; he's certain that when the judges visit the factory and see the benevolent brotherhood he has established, the prize will be his. Alas, life can never quite be as precisely calibrated as one of his products and things soon begin to go haywire. A recently fired employee, Jose (Óscar de la Fuente), has staged a protest next door that will be the first thing visitors see when they arrive. Inside the factory, longtime production manager and childhood friend Miralles (Manolo Solo) is so driven to distraction by recent marital issues that he makes a series of expensive errors that threaten the factory’s reputation for efficiency. To make things even more complicated, Blanco finds himself falling into bed with one of the new interns, Lilliana (Almudena Amor), and an activity that he clearly looks upon as nothing more than a personal perk ends up badly backfiring on him.

Marking the third collaboration between de Aranoa and Bardem (whose first project together, 2005’s “Mondays in the Sun,” also dealt with labor relations), “The Good Boss” is a comedy through and through. It's not a particularly subtle one at that, as the use of scales as a grand metaphor might indicate, and ultimately one too uneven for its own good. Some individual scenes and moments are very funny, but too often de Aranoa’s script is just a little too on-the-nose for its own good, sacrificing the credibility of his message for the sake of easy laughs.

For example, the character of the security guard stationed at the front gate is such a buffoon that he comes across as a cartoon—his idiocy is required to move the plot along, but you wonder why the perfectionist Blanco lets him stay in his job. There's also a big turn of events in the final act meant to parallel a seemingly unrelated episode from the opening that feels like a contrivance by de Aranoa to score some cheap dramatic points. At the same time, other potentially interesting characters and developments, especially involving an immigrant worker (Tarik Rmili) who cooly tries to utilize the factory's chaos to his own advantage, are introduced and then left largely on the wayside.

"The Good Boss" is a bit of a mess. But in the middle of that mess, however, stands a wonderful performance by Bardem as Blanco. With deadly precision, Bardem nails Blanco's slightly-too-soft look, his facility with bland corporate talk, and a quietly self-satisfied attitude that may impress within the walls of the factory with his family name but is less effective elsewhere. He could have easily made Blanco into a cartoonish dolt (and that might have actually fit in more with the general tenor of the material). Instead, Bardem paints the man and his blinkered view of his own abilities as an allegedly benevolent boss in more human terms, which is both funnier and more enraging than if he played to the rafters. There are even points, especially as he gets in too deep with his intern (a subplot that frankly could have been turned into an intriguing movie on its own), where Bardem manages to create a certain amount of genuine sympathy for Blanco and his plight, while never letting you forget how much of a louse he really is.

Whether or not Blanco is able to save his factory, Bardem is able to navigate the narrative missteps surrounding him and ultimately make "The Good Boss" worth a look. 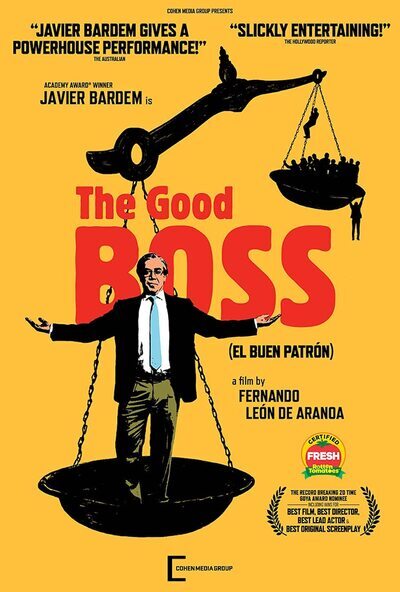