The Girl without Hands

Shapes shift in "The Girl Without Hands," a first feature by celebrated French animator Sébastien Laudenbach, an adaptation of the Grimm Brothers' tale detailing the experience of a young woman whose Faustian father, in his quest for wealth, unknowingly sells his daughter to the Devil. Laudenbach tells this tale, with its theme of female innocence threatened by sinister supernatural forces, using a shifting and layered style of animation that plunges us into the mercurial landscape of the story. "The Girl Without Hands" is violent and upsetting, not your typical "cartoon" fare, and filled with adult experiences (sex, childbirth) but it's also filled with moments as potent as those from a half-remembered dream. Strange images fill the screen: bright magenta ferns waving on the black forest floor, a pear gleaming white through a dark orchard, a marble bust of a man's head standing on the edge of a thick wood. Laudenbach's style is haunting. Some of his artwork stops you in your tracks. What he does best is create a palpable sense of dread without pushing, without tilting into melodrama.

The girl (Anaïs Demoustier) spends her nights sleeping in the apple tree behind her father's mill, unaware that the tree has been handed over to the Devil (Philippe Laudenbach), in a deal made with her father (Olivier Broche). Once the father realizes his error—that his daughter must now be handed over too—he is devastated. The Devil demands that the father chop off his daughter's hands instead. Helpless, the father obeys. (This is no bedtime story.) The girl without hands crawls out into the wilderness. A maternal and gigantic goddess (Elina Löwensöhn) saves her from drowning and points her in the way of a nearby castle. In the castle lives a prince (Jéremie Elkaïm), who falls in love with the injured woman who shows up on his doorstep. He makes solid golden hands for her. There is a time of respite and safety and love, before war erupts and the prince has to leave her behind. The girl without hands cannot catch a break.

While there is a "damsel in distress" quality to the narrative (never has a damsel met with so much distress in such a short period of time), her character exists through its oneness to nature. She takes pleasure in the stars, the trees, the bright red apples, the feel of rushing cold water against her naked skin. No wonder the river goddess reaches out with gleaming phosphorescent hands and plucks her from the river. The girl IS nature. Her body is the landscape over which wars are fought. Every bodily function a woman can experience is represented over the course of the film (I could have lived without a couple of them, to be honest). She doesn't just enjoy nature. She merges with it. This is the most important aspect of the story, reflected in Laudenbach's undulating shifting style, a landscape of layers of color through which her figure moves, or dances, or crawls.

Human outlines are dark slashes imposed on the many-layered background. These outlines cannot and do not hold. The figures shimmer in and out, sometimes disappearing altogether, the background becoming foreground, a vision of total obliteration. In "The Girl Without Hands," nature is constantly on the verge of flooding over, of destroying boundaries, individuality, the human form. Human beings are in a state of constant dissolve. Sometimes, in moments of high stress, the human form vanishes altogether, before popping back into existence. It's all very startling and beautiful, a counterpoint to the darkness and doom of its themes, female innocence corrupted and maimed and exiled.

The music is minimal, underscoring the mood as opposed to creating the mood, and much of the action takes place in a pure silence punctuated by proliferating nature sounds, rushing water and leaves rustling and bird calls, human gasps and cries.

In Laudenbach's emotional vision, the girl is a goner unless she can find a place for herself outside of man-made civilization. Nature is kind to her, nature recognizes her as a part of it, an entity to be protected. But where can she go to escape? How far is far enough? Hell is other people. 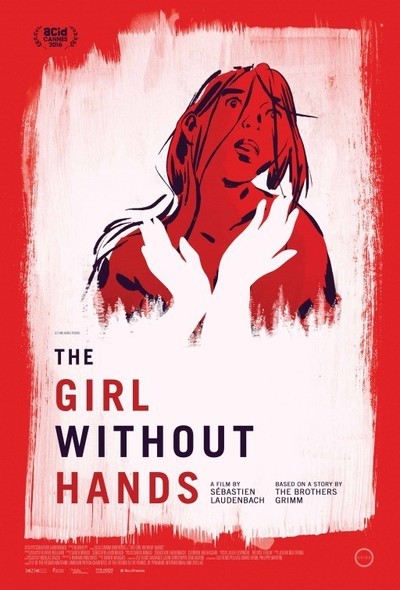 Anaïs Demoustier as The Girl (voice)

Jérémie Elkaïm as The Prince (voice)

Philippe Laudenbach as The Devil (voice)

Olivier Broche as The Father

Françoise Lebrun as The Mother (voice)

Sacha Bourdo as The Gardener (voice)

Elina Löwensohn as The Goddess (voice)