The Girl on the Train

The allure of “The Girl on the Train” was never the whodunit element of Paula Hawkins’ hugely popular page-turner. It was the way in which Hawkins bounced around with time and narration between a trio of toxic women, all of whom were struggling with the increasing difficulty of maintaining the finely tuned facades they’d presented to the world.

There’s Rachel, who gives the book its title. Once a happily married publicist, she now looks longingly out the window as she commutes to and from the city twice a day, fantasizing about the seemingly perfect suburban lives she passes while sneaking sips of vodka to fend off the shakes.

There’s Megan, the pretty blonde who lives in one of those comfortable houses. Working at an art gallery is one of the many ways this frequent liar and runaway has reinvented herself; she has a handsome husband and a cushy existence but she’s restless and ready for another escape.

Then there’s Anna, who’s now married to Rachel’s ex-husband and the mother of his infant daughter. Coincidentally, she also happens to live in Rachel’s old house. But while she wallows smugly in maternal bliss, she’s also bored and longs for the exciting, old days of being The Other Woman.

With each chapter, Hawkins peeled away the layers of these characters, revealing their flaws and fears and providing varying (and often unreliable) perspectives as the novel’s torrid events unfolded. Not unlike “Gone Girl”—to which it invariably will draw comparisons as a juicy exploration of violence and mystery in genteel suburbia—“The Girl on the Train” is good trash. At least as a novel, it is.

As a film, however, it’s not even that. It’s just a flat and suspense-free tale of pretty people in peril. And not only is the whodunit part of the film not all that intriguing (or surprising), neither are the characters swirling around each other until that big revelation comes to light. Tate Taylor blandly directs Erin Cressida Wilson’s adapted screenplay, which condenses these three women into a handful of traits rather than allowing them to be difficult and interesting.

Taylor, who previously played it just as safe with his breakthrough film “The Help,” doesn’t alternate between these characters with the necessary fluidity or tension. (His underrated “Get on Up,” featuring an electrifying performance from Chadwick Boseman as James Brown, had far more verve.) The story comes together in pieces rather than jelling as a dynamic whole. And because these women have been so oversimplified, there’s more of an emphasis on the fact that they’ve all been defined by and/or reliant on men. That wasn’t necessarily true on the page, which seems especially unfortunate given that the novel “The Girl on the Train” ultimately is about women standing up for themselves, fighting together and finding their own identities.

And yet, there is Emily Blunt, fighting as best she can to make Rachel complicated and compellingly damaged. The story has been moved from the outskirts of London to the leafy hamlets along the Hudson River in Westchester County, New York, but Blunt maintains her British accent. It makes Rachel an outsider from the start, and her near-constant, bleary-eyed inebriation exacerbates her loneliness and isolation. In the book, Rachel is puffy and frumpy; Blunt is anything but. She’s game for the showiness of the role, though, with its raging nights and remorseful days.

Rachel once had it all. Now she obsesses over the lives of others as she spies them from the train. Megan (Haley Bennett) is her main target, kissing and canoodling with her hunky husband, Scott (Luke Evans). Rachel projects all her dreams onto them; meanwhile, a couple of houses away, Anna (Rebecca Ferguson) also seems to be living a dream life with Rachel’s ex-husband, Tom (Justin Theroux).

Conveniently, Megan happens to have been their nanny. But then suddenly, she goes missing—and Rachel believes a glimpse of something she saw from the train might provide a crucial piece of information about her fate. Rachel also wonders whether she might have played a role herself, since she was blackout-drunk the night it happened. So she inserts herself into their lives and into the police investigation (Allison Janney is the much-needed voice of reason as the annoyed lead detective). Her stalking tendencies extend to Megan’s therapist (Edgar Ramirez), who’s trotted out as one of many possible suspects in her disappearance.

Rachel’s behavior seemed sad in its clingy desperation in the book, and the fact that she was grasping at wisps of her own alcohol-addled memory for clues made her a sympathetic figure. But in the movie, everything happens so quickly that her actions merely come off as bizarre and unintentionally funny. A couple instances of her running through the woods prompted giggles during the screening I attended, when Taylor probably was going for thrills and suspense.

Also oddly, the men in the equation are afforded even less characterization, even though they’re the ones who dictate how the women feel about themselves. And so when “The Girl on the Train” finally answers the question of whodunit—reliably, for once—the result is more of a shrug than a shock. 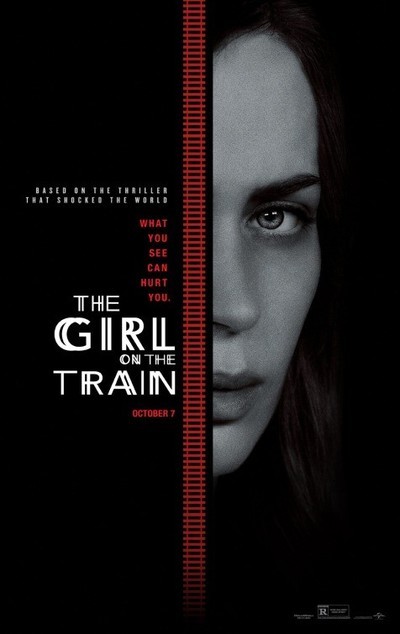