For one brief, shining moment during the early part of this year, horror film buffs who had grown weary of unnecessary remakes, found-footage foolishness and whatever that "Ouija" nonsense was supposed to be had reason to believe that the genre was at long last pulling itself out of its rut thanks to the arrival of such instant classics as "The Babadook," "A Girl Walks Home Alone at Night" and "It Follows." Alas, this brief grace period did not last and things depressingly returned to normal via the likes of "The Lazarus Effect," "Unfriended" and the ghastly "Poltergeist" revamp. And yet, even those clunkers look like modern masterpieces when compared to "The Gallows," a ridiculous fusion of "Paranormal Activity" and "Glee" that is so incredibly dumb that it is almost, but never quite, scary to behold.

Twenty years ago, a small Nebraska high school was rocked by tragedy when an accident during the performance of "The Gallows"—apparently the play that lesser schools put on when they cannot afford the rights to "The Crucible"—resulted in the onstage hanging of lead actor Charlie Grimille. For reasons that are never adequately explained, the school has chosen to commemorate this tragic anniversary by restaging the play, possibly with the original choreography. The problem this time around is that, for reasons that are never adequately explained (a phrase I will stop using at this point lest I wind up applying it a lot), the lead role has been filled by Reese Houser (Reese Mishler), a top jock who seems to have been lured into the part due to his secret crush on the school's literal drama queen, Pfeifer Ross (Pfeifer Brown). Alas, he is a terrible actor, barely knows his lines and with only one more day until opening night, it appears that the show is headed for disaster.

To save Reese from embarrassment and to stick it to those theatre-loving nerds big time, Ryan (Ryan Shoos), his deeply irritating best pal, hits upon a foolproof idea—the two of them will sneak into the school that night and trash the set, thereby causing the show to be scuttled for good. Along with cheerleader Cassidy (Cassidy Gifford, daughter of Kathie Lee), the two sneak in but are interrupted in their vandalism by Pfeifer. Moments later, their wreckage has been mysteriously repaired and when they try to leave, the four find all the doors locked. As they try to figure a way out of the school, it transpires that something is in there with them slamming doors, moving about in the shadows and attempting to pick them off one by one. Has the spirit of Charlie Grimille returned to haunt those who would dare restage the play that cost him his life or is there a real person lurking about to make sure that the show does not go on?

As someone with a certain affinity for what Roger Ebert used to refer to as Dead Teenager movies and who also was a theater major in college, I admit that I went into "The Gallows" with a certain amount of amused curiosity that wound up being completely squandered before the running time hit the double-digit mark. While I recognize that quibbling about logic in a film of this type is a losing proposition at best, the writer/director duo Travis Cuff & Chris Lofring set things up in such an insultingly lazy manner that even the most basic narrative questions are simply ignored. Why is there seemingly no media coverage of an event—the revival of the seemingly haunted play—that would almost assuredly inspire it in real life? Why is it that almost none of our heroes have even the slightest knowledge of the history of that doomed production, especially when it appears that there may be more to the participation of one of them than meets the eye? Heck, we don't even get an explanation of how the botched hanging stunt was supposed to work in the first place and how it went wrong.

The geography of the film is similarly messed up—the school seems to have an unlimited supply of endless corridors and hidden rooms and it is virtually impossible to figure out where anyone is supposed to be at any given moment, even more so since everything is shot in near-darkness. The characters that we are theoretically supposed to be rooting for are singularly uninteresting and unsympathetic throughout—you can't wait for them to get bumped off—and the newcomers playing them, for the most part, are unable to make them stand out in any particular way. The lone exception here is Ryan Shoos as the obnoxious friend, who turns in one of the most annoying, nails-on-the-chalkboard performances in a long while—not only do you want to see him taken out as soon as possible, you want to see him go out a la the hapless babysitter in "Jurassic World." To make matters all the more excruciating, this is another one of those found-footage deals and one of the least effective uses of that tiresome gimmick to date—not only is it almost impossible to decipher what is going on in an individual scene, the question of who exactly is shooting most of the footage will prove to be too much of a distraction for most viewers.

"The Gallows" is idiotic and borderline unwatchable but there are a couple of things about it that do make me smile to think of them. I liked the touch of the "secret" unlocked door to the theater—I think that every high school and college theater has a similar point of after-hours entry that people use from time to time. While I cannot in good conscience recommend the film to members of high school theater departments, I will say that groups that do choose to watch it will probably bust their collective gut laughing at it. Finally, I am amused by the notion that, if only for appearances sake, Kathie Lee Gifford will one day find herself watching it as well. My recommendation to her in this regard? Forgo a mere glass of wine and bring the entire box along instead—you are probably going to need it. 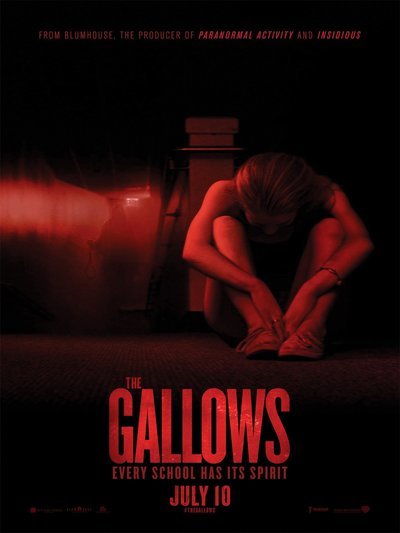 Rated R for some disturbing violent content and terror

David Herrera as David the Janitor