Just before the commencement of the screening of the new horror film "The Lazarus Effect" that I was attending, a woman entered the theater with two small children—maybe 6 and 4 years of age tops. Under normal circumstances, such a spot-on parenting choice would lead to the kids screaming and yelling in response to all the nasty imagery and blaring sound effects emanating from the screen. However, I don't recall hearing a single peep from either of them at any point during the screening despite all the on-screen atrocities. From this, I can conclude one of two things—either kids today are even more jaded than previously suspected or, more likely, "The Lazarus Effect" is such a limp excuse for a horror movie that it cannot even get a rise out of a couple of kids out past their bedtime on a school night.

The film is yet another riff on the old chestnut of arrogant scientists who discover the secret to bringing the dead back to life and discover to their amazement that it is not all that it is cracked up to be. Our tamperers in God's domain this time around are Frank (Mark Duplass) and Zoe (Olivia Wilde), a couple of researchers at a California university who are developing a serum that could help revive the dead. With their team—computer ace Niko (Donald Glover), stoner brainiac Clay (Evan Peters) and Ava (Sarah Bolger), the cute newcomer who exists solely so that the other characters can explain things at length to her (and the audience) that they presumably already know—they manage to revive a dead dog. Inevitably, the dog doesn't seem quite right afterwards and one character remarks that it might end up going Cujo on them, presumably because referring to the far more apt "Pet Sematary" might have seemed a little too on the nose for comfort.

Through circumstances too idiotic to go into here, the group has all their research taken over by a biotech firm and they are shut out of their own project. In an effort to prove that this work was theirs, they sneak back into the labs one night in order to replicate the experiment. Alas, it all goes higgledy-piggledy and Zoe winds up electrocuted. Remembering his vow as a mad movie scientist to first always do harm, the grieving Frank decides to zap her with the serum and bring her back. Again, it works but things are not entirely right with her either as she begins utilizing 100% of her brain's functions to develop strange powers such as telekinesis, the ability to pull the others into her memories of a barely-buried childhood trauma and the habit of knowing exactly what everyone else is about to say. Now trapped inside the lab, the others find themselves being picked off one by one in grisly (though not grisly enough to violate the PG-13 rating) fashion while trying desperately to figure out a way to put a stop to what they have wrought before there can be the requisite final scene designed to set up a sequel.

If you think the above description was boring, trite and predictable, try sitting through it as it is unfolding. This isn't a real horror movie—this is the kind of horror movie that the characters in a real horror movie watch in order to comment on the lameness of the genre before their authentic terrors begin. The screenplay by Luke Dawson and Jeremy Slater is a pastiche of elements cribbed from other films ranging from "Frankenstein" to "Flatliners" to, oddly enough, last summer's action hit "Lucy." (To be fair, the latter is more of a coincidence since the film has apparently been sitting on a shelf since 2013.) The scares are almost entirely of the cheapo "BOO!" moments where someone unexpectedly pops into the frame for a quick jolt; while these can be effective when used sparingly, the film proceeds to run the technique into the ground in the first 10 minutes and then continues on with it. Meanwhile, the one surefire shock in a film of this sort—the bit where something thought to be lifeless is lying under a sheet and suddenly sits up—is handled so badly that the only screams are ones of frustration. To top things off, the entire thing is shot in such darkness that the mere act of looking at it becomes a chore that is hardly worth the effort.

Walking out of "The Lazarus Effect," the only question I had is why so many talented people signed on for a project that by all rights is the kind of thing generally made by complete unknowns who then fervently try to deny its existence if they wind up making it big sometime down the line. Okay, I guess I can kind of understand why Olivia Wilde might have done it--after all, she gets to bark, drool, sleep four feet above the covers and deliver the immortal line "Did I just die?" in what may have struck her like an exceptionally loony episode of "House." However, that doesn't explain why talents like Duplass, Glover and Bolger would waste their time on such nothing roles. Even the director, David Gelb, has a better pedigree than one might expect: although this is his first narrative feature, he made a splash a couple of years ago with the hit documentary "Jiro Dreams of Sushi." He even gives an apparent shout-out to that previous effort in one scene in which he has Wilde eating a plate of sushi. Alas, the pieces of fish on her plate come closer to demonstrating recognizable signs of life than anything else on display here. 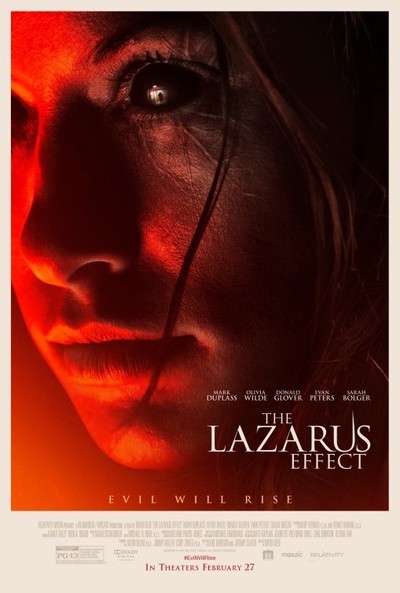 Rated PG-13 for intense sequences of horror violence, terror and some sexual references