The Fundamentals of Caring

Rob Burnett’s “The Fundamentals of Caring,” released theatrically today as well on Netflix after premiering at Sundance, expands on its title with the acronym ALOHA—Ask, Listen, Observe, Help, Ask Again. These are the fundamental requirements of a caregiver, as explained to Paul Rudd’s Ben, a retired writer trying to cope with unimaginable grief by essentially finding a surrogate son for the one he lost. Of course, the film exists to prove the rather simplistic ALOHA incorrect. There’s more to caring than any acronym could convey, and it is often the unexpected relationships we forge in life that get us over the emotional hurdles. Sadly, Burnett’s film, based on Jonathan Evison’s book, simplifies too many of its themes, choosing to wallow in melodrama and forced cliché instead of character. The only reason it’s not unbearably saccharine is that Paul Rudd, again, grounds a film in something that feels genuine. He’s never an actor that comes across forced, and he does his best to find the truth in Burnett’s overwritten script.

“The Fundamentals of Caring” is one of those films in which we meet a man who won’t sign his divorce papers but know, because we’ve seen movies before, that he will by the final scene. It’s a “lesson movie,” one in which we’re going to watch people start off in places of grief and bitterness and evolve towards happiness. Now, there’s something to be said for films that do this well. They teach us that we are all capable of more than we think we are, that even our darkest days will be followed by light. It’s one of the reasons cinema can still be a powerful artistic force for good, and inherent in what Roger Ebert defined as the “empathy machine” of film. And yet it’s not hard to tell when that empathy feels unearned or manipulative. The characters in “The Fundamentals of Caring” aren’t real people as much as they are strings waiting to tug at your heart.

Ben’s first client as a caregiver is Trevor (Craig Roberts), an angry 18-year-old with Duchenne muscular dystrophy. Trevor is aggressive and difficult, opening up the interview process with Ben demanding to know how he would wipe his ass (which will be one of Ben’s duties). He tries to shock Ben, but even this is done with such broad comedy that it feels like weak attempts at shock value. Yes, some kids in wheelchairs want blowjobs from Katy Perry and fake choking to scare their caregivers. Every time that Trevor does something “outrageous,” it should illuminate how he has pushed people away to protect himself emotionally, but it lacks realism and teeth. Trevor is like a device, a way to chart Ben’s journey from grief to happiness, and that leaves the whole piece a bit hollow.

“The Fundamentals of Caring” really loses focus when the road trip on which Ben and Trevor are going picks up a couple of passengers, including a troubled young lady named Dot (Selena Gomez) for Trevor to flirt with and a very pregnant woman named Peaches (Megan Ferguson), who has a husband serving overseas. As this caravan of clichés motored deeper into melodrama—toward a lesson-learning ending—my interest waned. And yet Rudd has an amazing ability to sell a cheesy line like “It’s the only reason we’re here,” regarding parenthood. Even as Burnett is doubling down on the clichés, Rudd finds ways to ground it. If you’re a fan, it’s an acting feat worth checking out. Everyone else may want to Ask Again for something better. 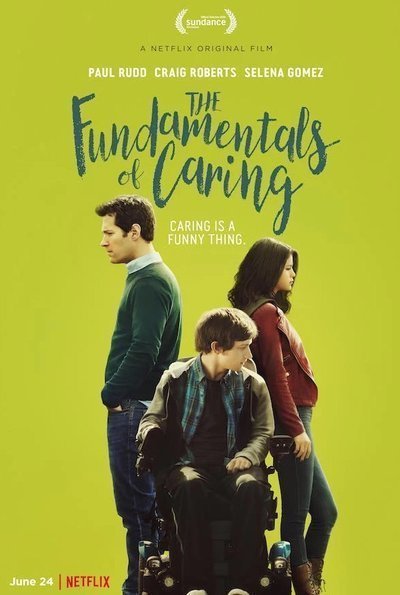