The Forest of Love

Netflix is developing a reputation for funding passion projects that distill entire filmmaker’s careers into one epic work. Consider how much “Roma” reflects the life and work of Alfonso Cuaron. The same appears to be true about Martin Scorsese’s “The Irishman.” A fraction of the people who watch those two films will stumble upon Sion Sono’s “The Forest of Love,” but it too feels like an internationally admired filmmaker being handed a blank check and told to run rampant in his own passions.

Loosely based on true events, “The Forest of Love” will be recognizable as a Sono film to anyone who knows his work. There’s an obsession with teen girls in uniforms, a suicide pact, characters who are wannabe filmmakers, playfulness with chronology, and, of course, enough gore to turn off most people who aren’t familiar with the director of “Tokyo Tribe,” “Tag,” and “Why Don’t You Play in Hell?” It is a movie that wallows in its excess, undeniably long and repetitive and somewhat nonsensical, but never boring. There’s too much filmmaking craft on display to care that this movie seems to go on forever. Hardcore Sono fans may wish it was longer.

Here’s where we usually recap plot. I’ll do my best. We meet an obvious conman named Joe Murata (Kippei Shiina), who may be an infamous serial killer we also see in a newscast. He claims to have gone to Harvard and work for the CIA, but he’s obviously a charismatic liar. Murata works his way into the lives of two groups of artists. First, there’s a pair of girls named Taeko (Kyooko Hinami) and Mitsuko (Eri Kamataki), who went to school together. Flashback time! They were involved with another girl in a production of Romeo & Juliet that ended, of course, in tragedy, and there was a suicide pact in which a group of girls took medicine to make them drowsy and stood on a roof ledge, and there was some lesbian stuff, and other Sono-esque nonsense and so on and so on. Recapping Sono is very purposefully like going down a rabbit hole. You start to get a little hazy. It is important though that Mitsuko and Teiko are both products of tragedy, and that Murata will take advantage of that vulnerability.

Second, there’s a trio of filmmakers who become fascinated when Murata starts dating Mitsuko. They can tell he’s a great movie character, and so they start secretly filming them and then not-so-secretly as Murata takes over the production himself and things get really weird. Murata essentially becomes Charles Manson to both the girls and filmmakers, rarely getting his hands too dirty but abusing them and shrugging off the deaths that follow. It’s Sono playing with the idea of the sadistic filmmaker, someone who easily goes from charismatic to violent to monstrous.

And it’s all done in the inimitable Sono style, which means nothing is subtle. Actresses shake and scream when they deliver their emotional lines, and Murata yells at one of his followers that there are four emotions in film: Joy, Anger, Happiness, and Sadness. He’s clearly speaking for Sono, who pushes the meter to red in all four of those categories whenever he’s given the chance. When Murata screams, “Movies are about emotions!,” it could be Sono’s mantra as a filmmaker who has sometimes been written off for his extreme imagery but is much smarter and more subversive than he’s given credit for. There are times when “The Forest of Love” reminded me of a classic subversive, John Waters, another filmmaker who pushed boundaries in ways that often turned off viewers but had something new to say about who could create art and why we do so.

Is “The Forest of Love” too long? Oh God, yes. There’s no reason for this movie to run over two-and-a-half hours. Some of the scenes wallow in their length like they're challenging you to switch away. But there’s something mesmerizing about the excess. Sion Sono does not care that his movie is too long. He doesn’t care that it’s weird or gross or inconsistent or anything that a producer's note might protest. We see so many movies every year that feel like the product of a focus group or marketing team. Not this one. Not at all. And I hope Netflix keeps bankrolling projects like it for years to come. 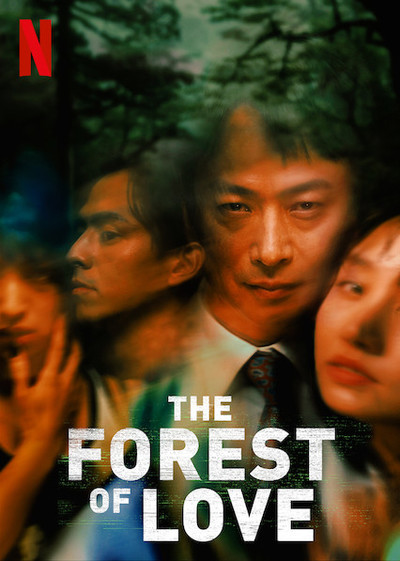