It occurs to me, as I sit down to write this review, that perhaps I was the wrong person to be assigned this movie. It was some time ago that I first read that Warner Brothers and New Line had made a motion picture based on the exploits of a group of friends who had been keeping up a game of tag across multiple decades, stemming from childhood to adulthood. And I thought, “that’s one of the most asinine things I’ve ever heard.”

And even then I could envision the sentimentality that would be brought to this enterprise. As it happens, that’s the only thing I got right. “Tag,” directed by Jeff Tomsic from a script that Rob McKittrick and Mark Steilen very loosely adapted from a feature story in the Wall Street Journal, and starring Ed Helms, Jon Hamm, Jeremy Renner, Jake Johnson, Hannibal Buress, and Isla Fisher, is not just asinine but out and out grotesque. It’s a lazy, vulgar celebration of White Male American Dumbness—one that only put an African American in the cast to camouflage just how much of a celebration of White Male American Dumbness it is.

No one should be surprised, I think, to learn that the actual group of men on which this movie is based are in fact all white. It’s not so much that I’m under the impression that tag is a game most sensible persons of color might consider corny. It’s more that, well, try to imagine a group of African American men feeling safe enough to play "adult" tag at their places of work or various other public spaces. You get the idea?

The movie begins with Ed Helms’ character, Hoagie, applying for a janitorial job. This despite, as his interviewer notes, the fact that he is already a successful veterinarian. Yes, moviegoers, the con is on as we glom onto Hoagie’s real intentions: to infiltrate the office of a big insurance company so that Hoagie can tag its new CEO, Bob Callahan (Hamm). Damn, these guys take this game seriously.

In disguise, Hoagie infiltrates a conference room where Bob is being interviewed by Rebecca, a reporter for the Wall Street Journal (Annabelle Wallis). The subject is diabetes, and the company’s supposedly shady business tactics relative to that disease. This is kind of odd, that the screenwriters should introduce a relatively serious topic here and then have all three characters just shuffle it aside because it’s the month of May, when this group’s game is traditionally played, and Hoagie has a plan to trap Jerry, the only member of the playing fivesome who’s never been tagged. They’re gonna nab him at his upcoming wedding!

Entranced, Wall Street Journal reporter Rebecca tables her questions on diabetes and says that this 30-year-old game of tag is the REAL story. Because adult concerns are not real concerns—remember, as they say several times throughout this tiresome movie, “We don’t stop playing because we grow old. We grow old because we stop playing.” (The characters misattribute the quote to Benjamin Franklin, throughout, and are corrected at the end, again apparently inaccurately, because my Google search says it was George Bernard Shaw and not a “German anthropologist” as Buress’ character has it, but by now I don’t care who said it and I never want to hear it again.) This maxim itself sounds like it relates to hanging on to one’s innocence and/or childlike wonder, but given that one of its flashbacks is a nostalgic reverie in which one character looks in on his best buddy getting a handjob from a girl he himself is crushing on, the movie’s idea of innocence is … well, what’s the word? “Warped?”

To get back to our plot summary: And off they jet to the Pacific Northwest, land of their youth, to confront the cagey Jerry (Jeremy Renner), whose bride-to-be (Leslie Bibb) begs the crew, rounded out by a stoner played by Johnson, a funny person played by Burress, and a feisty wife played by Fisher, not to prank their wedding while playing. This gives Jerry leverage, as do his martial arts skills and lack of inhibition about breaking other peoples’ windows.

This sounds like something that has the potential to be a family-friendly variant on “The Hangover,” but here’s the other thing: this is not family-friendly. Every other word is a profanity, and there’s a set piece which involves one character’s threat to ejaculate on another character’s beloved teddy bear. Recovery programs come in for some mockery, and while the ways the characters go about avoiding getting tagged has some long-con ingenuity suggesting second-tier David Mamet, the overall effect of seeing supposedly ordinary guys resorting to out and out acts of sociopathy in the name of gamesmanship sends a weird message, to say the least.

Also, it’s not funny. The only laughs in the movie come from Buress, who I believe must have made a lot of suggestions on dialogue in the rehearsals, because nothing else in the movie is as sharp. Okay, the one line where a character tells the boys that if it weren’t for their dumb game they’d all be “day-drunks playing mini-golf with twelve-year-olds” was pretty right on. Probably applies to the filmmakers as well. 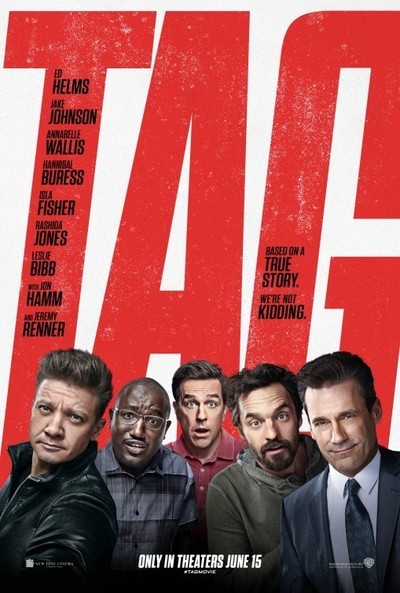 Rated R for language throughout, crude sexual content, drug use and brief nudity.

Writer (based on the Wall Street Journal article entitled "It Takes Planning, Caution to Avoid Being It" by)