The found footage concept may have reached its endpoint with the deeply unsatisfying “The Final Project,” opening in limited release today before expanding nationwide in March. For years now, heavily inspired by the critical and commercial success of “The Blair Witch Project,” we’ve watched young people with recording equipment fall victim to supernatural forces. Again and again, filmmakers have foregone horror genre elements like atmosphere or even plot in an attempt to provide a you-are-there experience. At their best, found footage films transport us across that line that gives us the safety of “it’s only a movie.” At their worst, their faux realism fails to hide the poor acting, lack of screenwriting and incompetent filmmaking. Such is the case with “The Final Project,” an aggravating, meandering journey through a reportedly haunted location in the South.

Local folklore tells the story of the Lafitte Plantation in Vacherie, Louisiana, once reportedly the inspiration for Tara in “Gone with the Wind” but now a run-down, dilapidated building, overrun by foliage and unoccupied. The idea that a found footage film could play off the era of hit TV shows like “Ghost Hunters” and take us to a real location to mine it for atmosphere is a great one, but director Taylor Ri’chard isn’t really interested in Lafitte. It’s a background that might as well be a Hollywood set or a house down the street from you it’s so poorly utilized. It has no personality when it should really be the star of the film.

Instead, we spend an inordinate amount of time with the six college students who have decided to spend the night at Lafitte for a graduation project (it’s not quite clear what the project would possibly look like in the end even after a scene in a classroom in which they tell their teacher about it). For half of the film’s remarkably short running time, we “hang” with the six students as they plan their project and head out to Lafitte. Such hanging includes a bit of character development in a potential love triangle, another possible hook-up, and, well, that’s about it. The “characters” in “The Final Project” are the kind of paper-thin movie folk who talk during the entire trip to the plantation about manscaping and how many people they’ve slept with. And imagine that inane chatter filmed from the back of a van with a bumpy handicam. It’s arguably the scariest scene in the movie.

Thin characters and a lack of actual scares is one thing, but “The Final Project” really sinks another level when one considers its technical elements. Yes, found footage films are inherently given a lot of leeway in terms of their visuals, but “The Final Project” is sometimes baffling. People are often shot at torso level, or, worse, we’ll be looking at a wall while overhearing a conversation. Remember the end of “The Blair Witch Project” in which the camera is an odd position and we see something only in the background? Imagine a movie that’s 50% that. A camera might be left on a table and we’re staring at someone’s hand on a mouse while we listen to other people talk in a fuzzy conversation behind it. Did their teacher never teach them how to frame a shot? Or at least focus on someone’s face? And when the filmmakers chose to make the film at least mildly visually focused, the sound sometimes doesn’t even sync up and the ADR is inconsistent. Although you won’t notice that given how often you’re looking at feet, torsos and walls.

Worst of all, nothing in “The Final Project” has any personality. The performances, save perhaps one (Arin Jones’ Genevieve) are all mediocre at best, but I’m pretty sure they were done no favors by a production that feels like it took the first take of everything (I became convinced of this when one character mispronounced “apparitions” and I didn’t actually hear someone say cut). Even the horror has no edge. It’s one of those movies in which shaky cameras and noises in the distance are meant to convey fear. If the found footage glut has taught us anything it’s that filmmakers often think they can fall back on the micro-budget aspect of the genre and fail to meet other basic requirements of horror filmmaking. “The Final Project” proves again that they cannot. 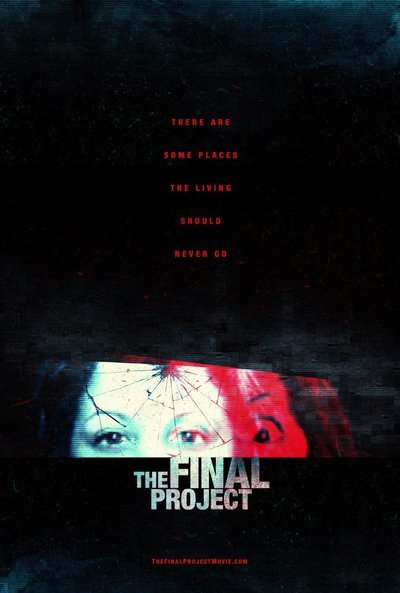