Hip-deep into "The Final Member," aspirant penis donor Tom Mitchell insists "I like to to treat people the same way others would like to be treated, and that's with respect." It's unclear what Mitchell's heart-felt words mean in the context of "The Final Member," a semi-serious documentary about The Icelandic Phallogical Museum (AKA That Weird Penis Museum You've Probably Heard About But Never Been To). Filmmakers Jonah Bekhor and Zach Math are sincerely interested in museum owner Sigurður Hjartarson, and his quest to get a human penis to complete his museum's collection of mammalian members. But because they know how ridiculous Hjartarson's unusual fascination seems, they turn him, Mitchell, and their associates into sideshow attractions. These are real people, but in "The Final Member," they're fascinating curiosities.

Hjartarson is, admittedly, a tough documentary subject. What tone should you adopt when you talk about a man who avidly boasts about how many whale penises he owns? Hjartarson is also sincere, but that's only so interesting when the object of his fascination is a penis museum. Bekhor and Math allow Hjartarson and some medical professionals to explain why The Icelandic Phallological Museum exists. There's some soundbite-friendly talk of breaking taboos, and educating visitors. But generally speaking, the museum seems like a modest, but vividly-detailed freak show. Not enough time is spent dispelling that notion, even if we do see Hjartarson giving tours to visitors.

Still, you can't really tell much about Hjartarson's interests based on talking head interviews with family members like his daughter—"My dad has been collecting penises for as long as I can remember"—and wife: "More and more penises kept coming into the house." And some of the film's talking head experts aren't much better. Like, how do you stop yourself from laughing and/or crying helplessly after a serious academic wonders aloud "Why is it, in the 21st century, that the penis is so taboo?" The answer has to be because nobody, not even Bekhor and Math, know, or care to have a serious conversation about man-things.

One can't really fault Bekhor and Math for trying to entertain rather than educate viewers. But their carnival barker callousness is really disturbing when it comes to Mitchell, a man whose character arc is the most fully-realized in the film. At first, Mitchell is treated like a Christopher Guest character (for some reason, Jennifer Coolidge comes to mind). He tells us that he wants to donate his penis to Hjartarson's museum. He wants the world to see it. Mitchell has even named his penis Elmo, though not after the Muppet. He wants to write comic books about his penis. Moreover, Mitchell is so eager to donate his penis that he wants to give it away before he even dies

Bekhor and Math try to humanize Mitchell later by showing him being counseled about having his penis surgically removed. But in "The Final Member," Mitchell's frustration is only ever a titillating plot point. For example, Mitchell is clearly emotionally distressed, and you can see that in the way he bombards Hjartarson with emails. But these emails are only highlighted, and dramatically read by Mitchell in order to explain why Hjartarson became too scared to respond to him. Hjartarson understandably doesn't want more dick pics of Elmo dressed up in various costumes (yes, you get to see him dressed up for Christmas, and no, you can't un-see that). Eventually, Hjartarson is so distressed, that he only wants Mitchell to stop dilly-dallying, and decide if he's donating his penis or not: "He must do it on his own, and I'm just waiting to receive it." At this point in the film, we see what Bekhor and Math have in common with Hjartarson: they want what they want, and that's all that they want. They're not introspective people, so their respective projects are, well, impenetrable.

That lack of clarity wouldn't be so bad if Bekhor and Math didn't try to make a last-ditch attempt at humanizing Mitchell. Later, he directly explains that there are medical and psychological reasons for his donation. But at this point, you realize just how exploitative "The Final Member" really is. How human can a person really be after we've seen him tattooing an American flag to his genitals? Mitchell isn't a punchline. Just because Mitchell desperately craves attention doesn't mean he deserves to be pitied. 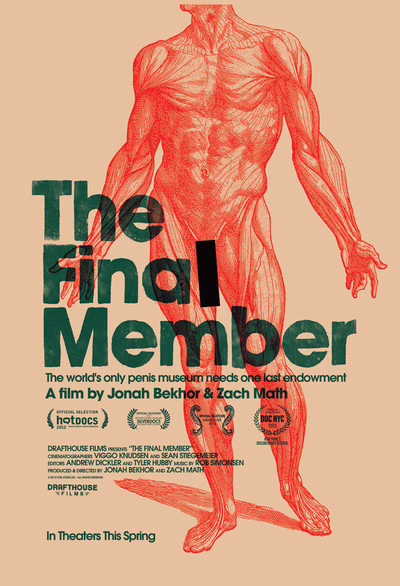 Sigurdur Hjartarson as Himself

Páll Arason as Himself

Tom Mitchell as Himself