If we agree with famous Baltimore contrarian H.L. Mencken that a critic must, above all things, have a "capacity for gusto," then Victor Tallez (Rafael Spregelburd), the Buenos Aires film critic moping his way through Hernán Guerschuny's "The Film Critic" is failing spectacularly in his calling. The "capacity for gusto" has been sucked out of him. He sees too many films, and all of them are bad. He has lost touch with the unwashed hoi polloi, who adore clichéd rom-coms, who approach things with (as he sees it) an uncritical eye. He rolls his eyes at gusto. Tallez is a cliché himself, the critic who scoffs at popular taste, who feels the entire world has derailed into a pit of sentimentality and bad art. "The Film Critic" pokes fun at criticism (at least Tallez's cranky prissy brand of it), and while lampooning self-serious intellectual critics is akin to shooting fish in a barrel, "The Film Critic" takes a light and knowing tone, spoofing the sacred cows of the critic world, and cramming every scene with visual film clichés that act like a "Where's Waldo?" of cinema.

The opening of "The Film Critic" shows the back of Tallez's head as he walks through the Buenos Aires streets, all as he drones on in French about his "maladie du cinema." "Films are suffocating me," he states flatly, and the condition is incurable. Set against grainy black-and-white street-scene images, reminiscent of the French New Wave, Tallez comes across as a dissociated gloomy figure, trapped in the confines of his own head. At the end of the opening, he drones, again in French, "At one point one may want to know why I think in French." [Beat.] "I have no idea." Of course, an Argentinian film critic, who sees the world as a French New Wave film, who is working on an "exhaustive" study of Godard, would "think" in French.

Tallez is a nationally syndicated film critic, and seems glumly proud of the fact that he hasn't given a review "Four Seats" (his newspaper gives "seats" instead of "stars") in years. He spends his days in a monotonous manner, going to press screenings, then out for coffee with a group of critics. Back at the office, his boss rails at Tallez, scolding him for his harsh reviews ("You are a terrorist of taste"). Tallez's harshest critiques go to rom-coms, and he lectures his credulous niece (Telma Crisanti), who loves rom-coms and can recite "Jerry Maguire" from memory, on what is wrong with the genre. Tallez describes the rom-com clichés: "Do not forget to put rain, lots of rain. And a run. We don't know why, but they always run." (Cue image of Billy Crystal running to find Meg Ryan in "Harry Met Sally.") Tallez is a drip.

Of course, over the course of "The Film Critic," Tallez meets an adorable and carefree woman named Sofia (Dolores Fonzi), who challenges all of his hard-won contempt for rom-coms. Sofia breezes into his life, wearing a big furry beret, carrying her Pink Panther bike helmet under her arm, a Manic Pixie Dream Girl par extraordinaire. She has no job, she is "quirky" (one of her quirks is kleptomania), she takes Tallez to experimental performance art pieces (Tallez drones in French on the voiceover: "My God. Enough. Kill me.") and, strangely enough, she has nothing better to do with her time than to hang out with this crank and show him how beautiful life can be. In its own fluffy way, Sofia is a critique of the movie cliché: woman as inspirational figure sprinkling fairy-dust over gloomy self-absorbed men drawn into their magical circle. When they first kiss, fireworks go off in the sky. Tallez has entered the rom-com of his nightmares and finds that it's not actually all that bad.

Guerschuny (who wrote and directed) takes a self-conscious and self-aware approach. "The Film Critic" is loaded with references to other films, and the style changes drastically as the various subplots kick into gear. When Sofia enters, suddenly the film becomes a rom-com, with cute music and montage sequences, where she tries on adorable hats at a street market. In a darker subplot, Tallez is stalked by a young director, furious about Tallez's review of his film. The director sneers at Tallez, "It took me 5 years to make it. It took you 5 minutes to destroy it." The director shows up everywhere, in crowd scenes, across streets, glaring through the space at Tallez, and as that rises in importance, the film veers into a thriller, complete with dark empty movie theatres, and ominous tracking shots.

The most interesting thing about "The Film Critic" is how it poses the possibility that there may be more truth in clichés than Tallez perhaps wants to acknowledge. The reason mass audiences respond to rom-coms (for example) is that such films approach the truth of the matter of Love, even in their non-realistic, sometimes tiresome ways. Love is something universal, and who you fall in love with is a matter of the greatest importance to regular people who are not characters in a movie. Rom-coms acknowledge that sense of importance, and the urgency of those clichéd moments (running through the rain, or running through an airport to stop your beloved from getting on a plane to Antarctica, or whatever, everyone is running), express that urgency in a formula that often works. If it didn't work, it wouldn't be used so much. As embarrassing as it is to Tallez, he discovers that falling in love with someone actually does feel like fireworks going off over the bay.

Hernán Guerschuny is a longtime film critic (he runs the magazine Haciendo Cine) and "The Film Critic" is his debut. Many of the details in "The Film Critic" are spot-on: the conversations at press screenings (arguing about whether a film is good/bad enough for The Berlinale), people making statements about how they hate comedy because "there's nothing to discuss", the constant references to cinema, the casual comments made during conversation, like: "In high school I spent more time following the career of some director of photography than getting a girl's phone number." Much of "The Film Critic" is an in-joke aimed at an insular sub-culture, and so it lacks a sense of significant commentary on its subject matter (think of "In a Lonely Place," or "Adaptation," or "Barton Fink" for comparison). "The Film Critic" is an extended spoof more than anything else (it may have worked better as a short film), and its targets are pretty shallow, but it still includes many entertaining and insightful elements. 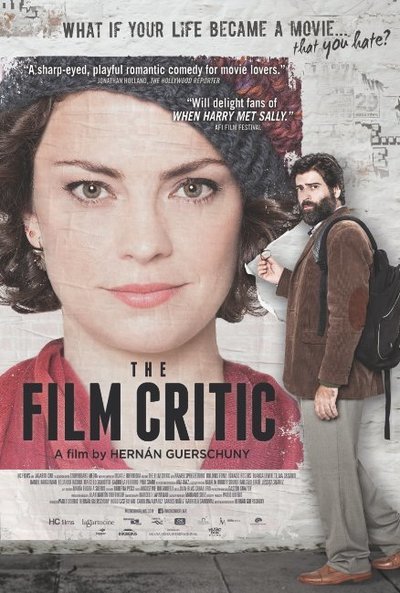