Bogart as an alcoholic loner with a girl he doesn't deserve

The courtyard of the Hollywood building occupied by Humphrey Bogart in "In a Lonely Place" (1950) is one of the most evocative spaces I've seen in a movie. Small apartments are lined up around a Spanish-style courtyard with a fountain. Each flat is occupied by a single person. If you look across from your window, you can see into the life of your neighbor.

One apartment is occupied by Dixon Steele, an alcoholic screenwriter who has some success but is now in the midst of a long, dry spell. Across from him is Laurel Gray (Gloria Grahame), a would-be actress and a smart cookie. Steele is a bitter, angry man. Drinking at noon in his usual hangout, he succeeds in insulting his agent, punching a man who is cruel to an aging has-been actor and then getting in a fistfight with the son of a studio chief.

This concise opening scene, set in a bar inspired by Bogart's own hangout, Romanoff's, establishes Dixon Steele's character and summarizes some of the things we sense about Bogart, that enigmatic man. They both drink too much. They're both idealists who sympathize with underdogs. They both have a temper. Steele has, and Bogart was always able to evoke self-pity; remember his Dobbs in "Treasure of the Sierra Madre." Bogart was at his best in conflicted roles, at his weakest in straightforward macho parts. Steele's qualities make him an ideal partner for Laurel Gray, who has been around, knows the ropes and is more likely to fall for a wounded pigeon than a regular guy.

"In a Lonely Place" has been described by the critic Kim Morgan as "one of the most heartbreaking love stories ever committed to film," and love is indeed what it's really about. It has the look, feel and trappings of a film noir, and a murder takes place in it, but it is really about the dark places in a man's soul and a woman who thinks she can heal them.

As carefully constructed by Bogart, who produced it, and directed by Nicholas Ray, from a great noir novel by Dorothy Hughes, it's at pains to make its man and women adults who know their way around. Neither is a victim, except of their own natures: Dixon Steele a drinker with rotten self-esteem, Laurel Gray a woman who should know better than to invest in him.

In the film, Steele is given the job of adapting a trashy best-seller. He needs the work, but he can't even bear to read the novel. A friendly hat-check girl named Mildred (Martha Stewart) tells him she loved it, and he hires her to come home with him and tell him the story. On their way through his courtyard, they pass Laurel Gray, and Gloria Grahame is perfect in how she conveys to him that she notices him. The storytelling session drags on, Mildred becomes a bore, and Steele sends her away. The next morning she's found murdered. Steele, seen to leave the bar with her and with a long rap sheet involving assaults and fights, is the logical suspect.

Did anyone see Mildred leave his apartment? Yes, as it turns out, Laurel says she did, and provides an alibi when she's brought to the police station. Something happens between Laurel and Dixon in the captain's office that is unmistakable -- and later that day they act upon it, no small talk, hungry with passion and hope.

Laurel gets Dixon off the sauce. He starts writing again. They're helplessly in love, a little giddy with happiness. But the possibility lingers that he did murder the girl, and that Laurel testified for him out of instinct more than certain knowledge. An idyllic interlude on the beach suddenly turns ugly and leads to worse. We, and Laurel, are presented with the possibility that her life is in danger, especially if he drinks again. Ambiguity about the true Dixon Steele provides the soul of the film. The fact that they truly love each other its poignancy.

This is a crisp black-and-white film with an almost ruthless efficiency of style. It taps into the psyches of the three principals: Bogart, who bought the story to produce with his company; Nicholas Ray, a lean iconoclast of films about wounded men (James Dean in "Rebel Without Cause"), and the legendary Gloria Grahame (1923-1981), whose life story inspired Peter Turner's extraordinary bookFilm Stars Don't Die in Liverpool.Turner was the last of her many loves. She was married to Nicholas Ray but that ended during the making of this film, when Ray found her in bed with his 13-year-old son by an earlier marriage. (She and the boy, Tony, were married from 1960 to 1974.)

Life on the set was obviously fraught with emotional hazards. Ray had modeled the movie's apartment complex on an apartment he once occupied at Villa Primavera in West Hollywood. When he moved out on Grahame, I learn from critic J. Hoberman, Ray actually moved onto the set and started sleeping there. The relationship between Dixon and Laurel mirrored aspects of Bogart's own with the younger, strong-willed, nurturing Lauren Bacall. Yet perhaps they all sensed that they were doing the best work of their careers -- a film could be based on those three people and that experience.

"In a Lonely Place" is a superb example of the mature Hollywood studio system at the top of its form. Photographed with masterful economy by Burnett Guffey ("Knock on Any Door," "Bonnie and Clyde"), it understands space and uses the apartments across the courtyard to visualize the emotional relationship between Dixon and Laurel. Visible to each other, dependent on each other, they never officially move in together but remain enclosed, and no matter what they say, apart. Notice the way Guffey focuses light on Bogart's eyes during a frightening speech when he imagines how Mildred was murdered.

"You know, Miss Gray," he says, "you're one up on me. You can see into my apartment but I can't see into yours."

"I promise you, I won't take advantage of it."

"I would, if it were the other way around."

Bogart is so good at playing vulnerable men. It's strange he has an enduring image as a tough guy. It would be more accurate to say he was tempered by experience. A decade before this film, in "Casablanca," he was already the man drinking alone late at night, afraid of hearing an old song.

About Grahame's characters there was often a doomed quality. She and Lee Marvin had an iconic scene in "The Big Heat" (1953) when he threw a pot of boiling coffee in her face. In "It's a Wonderful Life" (1946), she plays the grown-up Violet, who in the nightmare sequence, becomes a prostitute. She won an Oscar for "The Bad and the Beautiful" (1952), playing an actress who hates the producer who betrayed her. And she gained the unfortunate nickname "the can't say no girl" after performing that song in "Oklahoma!" (1955).

If there is one key element of film noir, it is the flawed hero. That, usually joined with a distinctive visual style and tone, defines the genre. The hero is sympathetic but weak, often haunted by mistakes in the past or fatally tempted by greed or lust. He is likely to discover himself capable of evil he had never dreamed of, and is consumed by guilt and fear.

Bogart embodies this noir quality flawlessly in "In a Lonely Place." He plays a good man with a hot temper who can fly into a rage when he drinks. This gives Dixon a Jekyll and Hyde quality that Laurel awakens to, leading to later scenes of terror. The monster inhabiting him is an acting-out of self-loathing, which infects his success and dooms his happiness. He foresees his fate when he quotes to her a line just written in his new screenplay: "I was born when you kissed me. I died when you left me. I lived a few weeks while you loved me."

Also in my Great Movies collection: "Rebel Without a Cause," "Casablanca," "Treasure of the Sierra Madre," "It's a Wonderful Life" and "The Big Heat."

Written by Kim Morgan, edited by Matt Zoller Seitz, an excellent video essay on "In a Lonely Place": 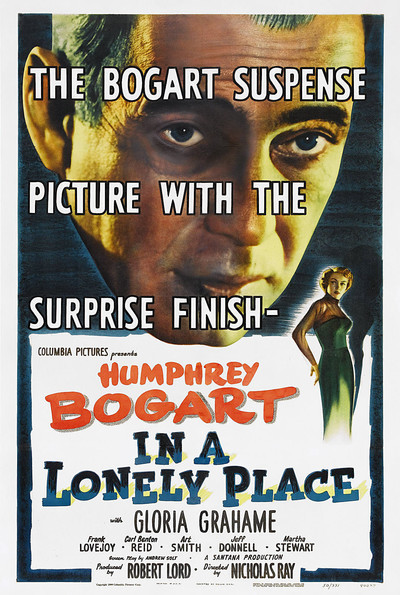