The project must have been just the kind Sellers loved to work on. He plays two of the major roles in the movie, the ancient Fu Manchu and the unflappable Nayland Smith of Scotland Yard. He also turns up in a variety of other disguises, as a Chinese chef, a foppish antique dealer and the young Fu. The roles required complex makeup jobs (as old Fu, he looks like one of Madame Tussaud's bad dreams); then Sellers plays around with accents, props, all the schtick he can dream up.

Unfortunately, the movie itself gives him little support. The screenplay doesn't seem to have been thought through on the level of small details, and details are what make movies like this funny. The hazard in these enterprises is that the story sounds so funny (Fu Manchu needs secret youth elixir, stages raid on British crown jewels) that the screenplay is never pushed to the next level of detail. By contrast, the Inspector Clouseau movies always felt meticulously thought-out.

The plot, in hindsight, is also just a little morbid, given Sellers' recent death. As Fu Manchu, he plays a 168-year-old man who starts fading fast after a clumsy assistant spills the vial containing his youth potion. Manchu has to reassemble the secret ingredients, including a precious jewel, and so he stages an international crime wave. But his life force is ebbing low, and there are scenes where his assistants feed him jolts of electricity to keep him turning over. It is just a shade hard to laugh at some of these scenes so soon after the funeral.

And, for that matter, they're not so funny anyway. The movie has some good moments (what Peter Sellers comedy could not have?), but the story never really involves us, the characters aren't all that interesting once you get beyond the makeup and the funny names and it's a bit disappointing that "The Fiendish Plot of Dr. Fu Manchu" doesn't grab the obvious opportunity to satirize all the old Boris Karloff lateshow specials.

What the movie does have is a certain endearing, dogged professionalism. Nobody sets out to make a bad movie, but bad movies are made, and the people making them often suspect the worst, even at the time. But they have to forge ahead. Peter Sellers was in too many good comedies, I suspect, to be able to convince himself that this was another one. But he was too much of a trouper to let down. Maybe that could be his epitaph: When he was good, he was very good indeed, and when he was bad, he was still trying. 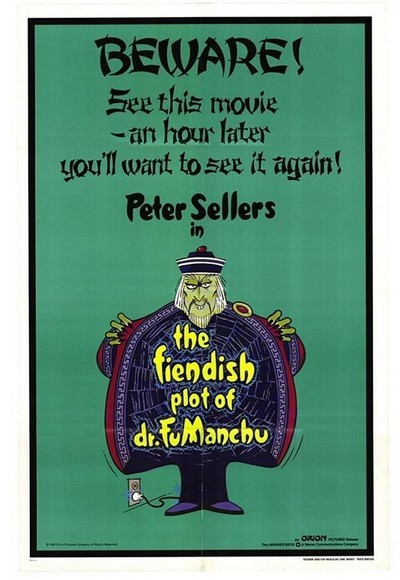 Peter Sellers as and Nayland Smith