With films like “Dogtooth,” “The Lobster,” and “The Killing of a Sacred Deer,” Yorgos Lanthimos’ internationally acclaimed works have been concerned with looming domestic dynamics and battles among couples, siblings and families residing under one roof. Those household idiosyncrasies and preoccupations of the Greek auteur now find a new habitat in early 18th Century England, with the fiendishly eccentric and entertaining costume drama “The Favourite.” Even if this unique absurdist has not exactly been your cup of tea previously, he might finally win you over with this deliciously “Dangerous Liaisons”-esque and thoroughly female-driven period film, co-written by Deborah Davis and Tony McNamara.

Lanthimos does not share a screenplay credit with the duo—an anomaly and a welcome departure for the filmmaker, who usually co-writes with Efthymis Filippou with his signature formality. But this is a suitable, if not refreshingly looser canvas for his proven sensibilities, which then gets stretched over a twisty love and power triangle among British Royals. For all its expansiveness, the Royal Palace in “The Favourite” is nothing more than an intimate home of familial duels, with compartmentalized walls that serve as pillars of confinement. In short, it’s a perfect "Lanthimosian" playground, complete with an array of mischievous backstabbers, tight corsets and a dash of eroticism.

Only sort of based on a true story and laced with plenty of creative fabrications, “The Favourite” follows Queen Anne (Olivia Colman, in an instantly iconic performance), one of the lesser-known monarchs of England who reigned in the early 1700s during the war with the French. An occasionally distracted and often irritable royal figure with a mysterious skin condition, overall poor health and a soft spot for luscious desserts, Queen Anne lives with her trusted friend and lover Lady Sarah Churchill (an authoritative and stiff-upper-lipped Rachel Weisz, terrific) and tends to her 17 rabbits that tragically fill an emotional void for each of her failed pregnancies. The duo’s royal order, however imbalanced, gets disturbed by the arrival of the calculating, mud-covered ex-aristocrat Abigail Masham (a menacing Emma Stone, like you’ve never seen before), who humbly accepts a position as a servant while courting an agenda of her own to restore her glory days. Initially, an unsuspecting Sarah lends Abigail a genuine helping hand, only to quickly realize the treacherous intentions of the double-player. Various complicities reach an urgent state after Abigail works her way into the Queen’s chamber as her new personal handmaid, and eventually, crawls into her bed as her lover. A poisonously competitive streak amid the trio commences in due course, while a number of male stakeholders (played by names like Nicholas Hoult and Joe Alwyn) wander in and out of the picture.

It would be unwarranted to define “The Favourite” as a timely feminist film with regards to its handling of female power in a male-dominated world. And yet, there is a certain timelessness in its old-fashioned frankness about a woman’s fight to get what she wants and demand what she deserves by any means necessary; brains, sexual appeal or usually, a combination of both. Often satirical, “The Favourite” also grasps the complexity of circumstantial, patriarchy-defined enmity among females, obliquely bringing to mind everything from “The Women” and “All About Eve,” to “Mean Girls” and "The Handmaiden." As amusing as it is to follow the misadventures of the infinitely witty and resourceful Abigail as she plots against her Queen and Lady Churchill, “The Favourite” deserves credit mostly for rising the desperate humanity of its female characters up to the surface, as they get challenged by their respective demons around social status, undignified competition and physical appeal.

The impeccable ensemble of players in “The Favourite” are thankfully allowed to deliver their lines with actual vocal fluctuations. In other words, the customary woodenness of dialogues that mark many of Lanthimos’ previous films is felt only in moderation here. Still, the filmmaker can’t help but indulge in excess occasionally, especially when he reaches for a fisheye lens to disorienting effect—the physical scale of the palace and its grounds is evident enough without that surplus. Fortunately, that forgivable glut doesn’t lessen an otherwise splendid package, elevated by legendary costume designer Sandy Powell’s original, mostly black-and-white creations (a monochrome palette must be one ingenious way to work around budgetary constraints) and Fiona Crombie’s seductive production design. Lanthimos’ most accessible movie to date, “The Favourite” is simply awe-inspiring in the way it harbors serious themes and anxieties about womanhood underneath a deceptively feather-light surface. 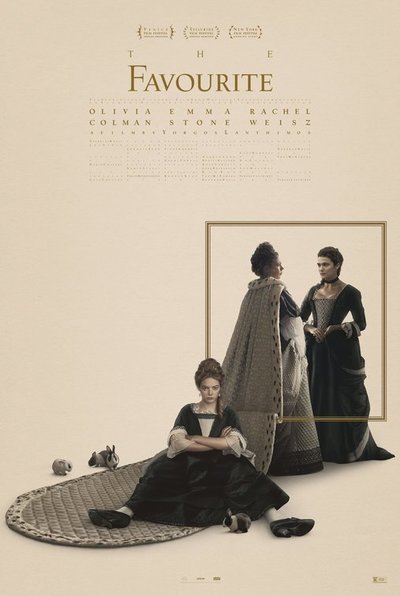