The Killing of a Sacred Deer

A man who plays God for a living meets a boy who chooses to play Devil in Yorgos Lanthimos’ chilling and breathtaking “The Killing of a Sacred Deer.” Once again, as he did with “The Lobster,” Lanthimos is working in a deeply metaphorical register, using an impossible situation to illuminate relatable human fears. The result is a mesmerizing thriller, a movie that asks questions with no good answers and traps us within its terrifying and bizarre situation with little hope for a happy ending. With uniformly great performances throughout the cast and Lanthimos’ stunning eye for detail and composition, this is one of the most unforgettable films of the year.

Colin Farrell, reuniting with Lanthimos and a bit bushier and grayer than before, plays Dr. Steven Murphy, a noted and respected surgeon. Externally, he would seem to have it all. He’s powerful and successful with a gorgeous wife named Anna (Nicole Kidman), who happens to be an ophthalmologist. They have two children—15-year-old Kim (Raffey Cassidy) and younger Bob (Sunny Suljic). Steven has befriended a 16-year-old named Martin (Barry Keoghan of "Dunkirk"), the son of a man who died on his operating table a few years ago. Exactly what happened in that room, and how and why Steven has tried to stay close with Martin is unclear at the beginning of the film. Lanthimos often keeps histories and motivations vague, allowing us to fill in the blanks as the film progresses.

From the beginning, something seems vaguely off with the relationship between Steven and Martin. The doctor introduces him as a friend of his daughter’s, but he’s not. And he buys the kid presents, even inviting him over for dinner. Martin becomes friends with Steven’s kids, and a romantic interest for Kim, but there’s a dark undercurrent here from frame one. Something’s just not quite right in the Murphy household, and it’s not only that the good doctor likes his wife to pretend to be under general anesthesia when he has sex with her. The Murphys seem to be just a little off, and Martin more than a little.

Then Bob can’t get out of bed. His legs don’t work. Not long after, he stops eating. Martin tells Steven what’s going on. It’s justice. Steven took his father, and now a member of his family must die. The scales must be balanced. Steven can choose to kill one of his family members and end the nightmare, but they will continue to lose the use of their limbs, refuse to eat, and eventually bleed from the eyes if he does not make a decision. Steven, being a man of science, turns to medicine to explain what’s happening to his family, refusing to believe that it’s some sort of cosmic karma coming to get him. Thematically, Lanthimos is playing with the differences between science and the supernatural. Steven plays God. He saves lives and he makes mistakes that take lives. And he sees the world in that kind of black and white. Martin breaks down his perfectly controlled worldview, and demands something rarely asked of the gods, personal sacrifice.

Working with his regular cinematographer Thimios Bakatakis again, and a multi-talented team of designers, Lanthimos delivers one of the most visually striking films of the year, a movie that recalls prime Polanski in its claustrophobic tension but more distinctly feels like an entirely new voice in horror. “The Killing of a Sacred Deer” takes place in a world of clean lines and kitchens as antiseptic as operating rooms. It's this world of suburban perfection that Martin, and Lanthimos, deconstructs with a waking nightmare. There’s something about the cool, detached world of “Sacred Deer” that makes it all the more terrifying. Of course, fallible man must be punished in a world this perfectly refined and lacking in common humanity. It almost feels like Martin gives Steven an out early in the film, inviting him to his more “everyday” world in which they watch “Groundhog Day” (tellingly, another movie about a man who must learn a lesson to stop a physically impossible situation) and his mother (Alicia Silverstone) demands he try her tart. But the God won’t deign to play with the mortals, and so he must be hurled from his throne.

And here’s where we get to the title. Late in the film, we learn that one of the characters wrote an A+ essay on Iphigenia, a Greek myth that centers on the killing of a sacred deer by Greek leader Agamemnon. Artemis, the goddess of the hunt, punished Agamemnon, and the only way to remove the punishment is for the leader to sacrifice his daughter, Iphigenia. Is the modern surgeon the equivalent of Agamemnon? Is the child who lost his father before he could talk about puberty with him Artemis? Lanthimos never draws straight lines, but the parallel is illuminating. He makes films designed to start conversations, to leave viewers startled and shaken. And he’s smart enough to use Greek myths, pitch black humor, and chilling horror in equal amounts.

It helps that he’s clearly at a point in his career where the right actors want to work with him. It feels like we’re finally at a time when we can recognize that Colin Farrell has been pretty great for a long time, choosing to work with challenging directors who bring out different edges of his ability even this late into his career. He’s phenomenal here, finding the shades of a man whose greatest sin may be his refusal to admit he’s only human. In the end, that may be the message of “The Killing of a Sacred Deer”—when you play God, you must deal with the consequences. The Lanthimos-Farrell dynamic is one of those relationships in which the creator and actor are so clearly on the same page that it’s invigorating.

That’s a good word for “The Killing of a Sacred Deer.” It’s a film that challenges viewers in such fascinating ways and feels so refined in its filmmaking that it’s invigorating to watch. It’s a rare movie indeed that can be this alternately terrifying, hysterical, strange, and heartbreaking, often in the same scene. Like the Greek myth that inspired the film, it feels powerful enough to be timeless.

This review was originally filed on September 10, 2017 from the Toronto International Film Festival. 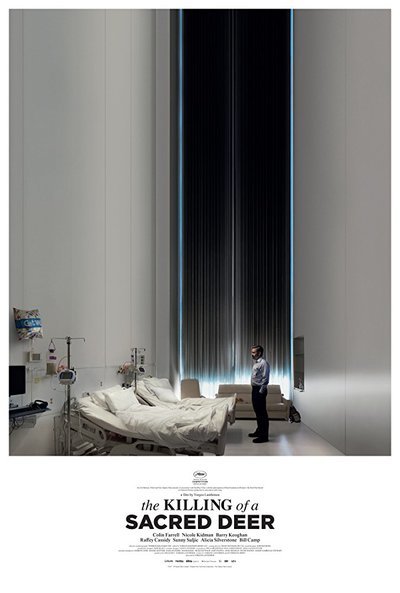